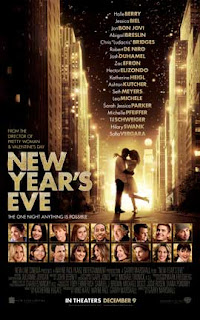 New Year’s Eve
Year: 2011
Director: Garry Marshall
Cast: Hilary Swank, Sarah Jessica Parker, Katherine Heigl, Ashton Kutcher, Lea Michelle, Michelle Pfeiffer, Zac Efron, Robert De Niro, Halle Berry, Josh Duhamel, Jessica Biel, Abigail Breslin, Jon Bon Jovi
Before I begin my review….
Wow, after I had written down the cast for New Year’s Eve, I thought to myself how impressive that list of actors really is.
There are a few Academy Award winners or nominees in that list, but those who aren’t…it is a who’s who of chick flicks really.  Sarah Jessica Parker is once again enjoying her time in New York City, Katherine Heigl plays the same film role she always does, Lea Michelle is belting out a tune and Zac Efron busts a move on the dance floor. Besides the winners/nominees circle where Hilary Swank, Robert De Niro, Halle Berry and Abigail Breslin belong, everyone is happy playing who they normally do.
My favourite thing about the movie? The bloopers reel. In my opinion, every comedy film should have a bloopers reel at the end. They just keep the laughs going right until the credits role. Honestly, some blooper reels are even funnier than the movies themselves. For the record if I was in a movie, my blooper reel would be like that of Halle Berry’s.
Review
What did British film Love, Actually start?
Garry Marshall has continued his 2010 film Valentine’s Day with this year’s New Year’s Eve. What is this film designed to do? Not much else than the collaboration of some big names for box office draw and create some sort of feeling of optimism. Other than that, it is a completely faulted film with more wrong with it than right.
New Year’s Eve follows the much used film technique of a number of stories being told over a particular time period with characters who’s lives all link in with each other. It is New Years Eve in New York City and everyone is trying to get through the night of nights in their own way. The night doesn’t end up the way any of the characters expect and there are tears, smiles, laughter and, of course, that elusive midnight kiss.
The best thing about New Year’s Eve is it does have a party atmosphere which makes everyone in the audience ready for the party season. However, the ball has to drop for this to be felt.
The first half of the film is incredibly boring and slow which will only prompt you to check your watch.  No suspense is felt and none of the subplots are really that interesting.  It is more of the same old, same old chick flick stories you see rolled into one with no time for any real emotion and any connection as the film darts from one story to the next.
The script is very lack lustre and relies on the sparkly glitter and confetti to make the film fun and enjoyable.
For a comedy, there isn’t very many actually funny moments. The moments in the film which are supposed to be funny are more just very forced and the jokes are really quite old. The blooper reel at the end of the film is funnier than the majority of the film.
None of the characters have absolutely any depth to them and people will walk away asking questions about the background of them, as there are definitely questions there to be asked. For example, how is Sarah Jessica Parker’s character of Kim Zac Efron’s Paul’s sister? There is at least an age difference of 20 years there. Some explanation of the family dynamics there would have been nice.
Hilary Swank, who plays the vice president of New Year’s Eve proceedings in Times Square Claire Morgan, starts off shaky and a bit rubbishy, grows into her role towards the end, helped by Robert De Niro who plays her father. Halle Berry is also quite good as Nurse Aimee, although her role is really very brief. It’s also good to see Abigail Breslin growing into a woman and still holding onto her acting talents.
Michelle Pfeiffer’s Ingrid is so pathetic at times that she is just irritating and Efron is also completely irritating at times. Lea Michelle’s Elise seems like a whole lot of nothing besides a singing voice and her and Ashton Kutcher have absolutely no screen chemistry.
Katherine Heigl is once again, just Katherine Heigl.
New Year’s Eve is, if nothing else, relevant for this time of the year. Completely unmemorable and trying a bit too hard to be everything it’s un named predecessors were.
3.5/10
Posted by NP1982 at 2:24 AM