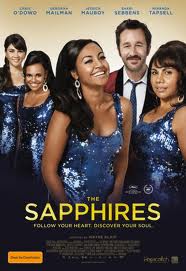 Before I begin my review…
It hasn’t been a huge year for Australian film in 2012 so far, but The Sapphires has more than a little potential to change that.

The Sapphires is now showing in Australian cinemas and is already proving to be a huge success in the local market. It has had the best opening weekend of an Australian film in the past two years and the third strongest of the past three years. It is going from strength to strength at the home box office and is about to make an impact on the international market.

The film made its debut at the Cannes Film Festival in May and has since received international praise. The infamous Harvey Weinstein has scooped up the rights for its distribution in the states after its successful showings at the festival…which is a sign that you are onto a good thing if there ever was one. The Sapphires is set to make its North American debut at the Toronto International Film Festival in September.

Personally I can see why this film is such a runaway success. It is one of those films that I love that cross genre’s so that it grabs a wider audience than a strictly genre film. There is something for everyone and as well as addressing the serious social issues, provides some light and fluffy humorous moments.

Just a side note, how well has little Jessica Mauboy done for herself? Back in 2006, Australian Idol took their auditions to the Northern Territory for the first time and their major find was 16 year old Mauboy who stood outside in the heat of the Australian desert and sang “I Have Nothing” by Whitney Houston while swatting flies away from her face. Now she has enjoyed the LA lifestyle and working with such artists as Snoop Dogg and Ludacris and The Sapphires is her second feature film.  That’s called knowing you’ve arrived.

Review
The Sapphires may be one of the best Australian films of the year (if not the best), but it is a great film regardless of which country it was made in.

Director Wayne Blair has brought the true story of an all-girl Aboriginal singing group to the big screen in a film that crosses all genre defining lines and makes this a film everyone will enjoy. The Sapphires is sweet, funny and feel good, but doesn’t eliminate the seriousness and emotion of the important issues it addresses.

Gail (Deborah Mailman) and her two sisters, Cynthia (Miranda Tapsell) and Julie (Jessica Mauboy) are living in 1968 Australia where racism against Indigenous Australians is still at large, especially in an outback pub where they take part in a talent quest. However, they do catch the eye of Dave (Chris O’Dowd) who gets the sisters and their cousin, Kay (Shari Sebbens) an audition to sing in war torn Vietnam. It is a journey which allows them to face their concerns and fears and realise their hopes and dreams a long way from home and everything they have ever known.

The Sapphires has a bit of everything for everyone. It is not often a film about Indigenous Australians comes along with addresses the seriousness of the trials and tribulations they have faced in regards to racism and the Stolen Generation (when Aboriginal children were taken from their families and placed with white families and brought up away from their culture), but also makes you smile and laugh. The characters and the location of the mission are extremely realistic and give you an appreciation of how hard these women fought for what they wanted despite the rocky road.

The film is obviously also a musical, but not the type where they burst out in song in everyday conversation for no reason. The musical sequences are well placed and the vocal talents of each of the girls used perfectly. And The Sapphires also is made complete by being a war film set in the Vietnam war. It captures the raw emotion and the horrors of the war, but also shows some of the beauty of the Vietnamese landscape and Saigon.

The script by Tony Briggs and Keith Thompson is very well written and adapted from the stage musical of the same name. It is clever and the jokes witty.

Deborah Mailman gives a career best performance as “mumma bear” Gail. She is a strong and determines female, yet her emotional vulnerability shown in the film is tear jerking. Although she is a woman you wouldn’t want to get on the bad side of, she is extremely likable.

Chris O’Dowd is also so likable as the group’s manager, Dave. He is hilarious, but also gives a solid performance. Miranda Tapsell gives a sweet and funny performance, and Shari  Sebbens also gives a good performance as the cousin who is racially confused as to whether she is white or black. Jessica Mauboy is extremely realistic as the youngest, but most stubborn sister.

The Sapphires is a film that is about Australians, but not one that is only to be enjoyed and understood by Australians. There may be one jokes non-Australians may not get, but just as long as you know that Melbourne is in Australia and not Ireland, you should be fine. There are many reasons to like this film and to remember it.
8.5/10