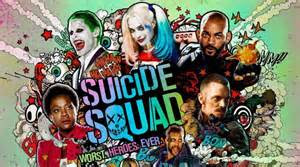 Suicide Squad is now showing in cinemas everywhere and is distributed by Warner Bros in the United States and Roadshow Films in Australia.

If Suicide Squad was a school student, it's report card would read "Tried really hard". This is how I want to approach the film. David Ayer's contribution to the DC universe is deeply flawed and not the follow up to Batman v Superman: Dawn of Justice that it should have been, but with a little knowledge about the background of the film and what happened prior to it's release, one can see what went wrong.

The premise for Suicide Squad is so exciting, especially for those who are fans of the DC comics. Villains are called upon to do good because the way US intelligence officer, Amanda Waller (Viola Davis) see's it, no one cares if the bad guys get killed. She recruits deadly hitman Deadshot (Will Smith), crazy and loopy villainess Harley Quinn (Margot Robbie), grief-stricken Diablo (Jay Hernandez, Occa assassin Captain Boomerang (Jai Courtney) and Killer Croc ( Adewale Akinnouye-Agbaje). Waller and Rick Flag (Joel Kinnaman)lead them to battle a supernatural force from ancient times, the Enchantress (Cara Delevingne) who seems undeafeatable in her quest to take over the modern world. They must all work together to achieve the unthinkable, but nobody counted on Harley Quinn's boyfriend, the Joker (Jared Leto) interrupting the party to take his girl home.

Back in April, the news of Suicide Squad reshoots sent rumours flying that the cast and crew were back on set in an attempt to make the film more humorous and light-hearted. Director Ayer responded to this by tweeting:

#SuicideSquad “reshoots for humor” is silly. When a studio loves your movie and asks what else you want, go for it!

And his intentions were reinforced with this tweet from August 6 after his film was released with incredible ticket sales:

Despite it's huge box-office figures during it's opening week, the film has been torn apart by critics. Much of the criticism is warranted, but for almost every part of the film that is criticised there is a reason why that decision was made by the makers. The finished product has come to prove that these creative decisions may not have been the right decisions as far as the critics and members of the public are concerned, but Ayer and his cast and crew evidently tried very hard to make it work and remained true to this vision. 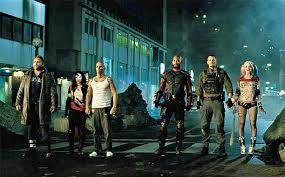 Perhaps the biggest problem with Suicide Squad is that it is not the atmospheric, dark tale of these menacing villains that people were expecting and craving. DC films do traditionally have a dark, dramatic edge to them, especially those that exist in the world of Batman. While their fierce rival, Marvel is known for superhero films that are somewhat lighter and have a humorous edge that is expected and embraced.

David Ayer's tweets above indicate that what he was attempting was to grab a piece of what makes a Marvel film work and use it in his film. Suicide Squad makes the bad guys the good guys and seeks to humanize the villains in order to make them more relatable and likable, especially Deadshot, Harley Quinn and Diablo. It's almost an obvious storyline and concept for the film and it is here that the DC universe darkness is taken away and is replaced with empathy. With this switch, the film is automatically lightened and with that comes the reassuring freedom that it is okay to laugh and have fun with the bad guys.

Yet, it does feel as though this has been taken too far. Suicide Squad is trying so hard to make the audience have fun and you can even see how hard it is trying. If Ayer hadn't denied the rumours that reshoots had taken place to make it funnier, you could have believed them after having watched the film. However, with this information that Warner Bros gave the go-ahead for more of what Ayer wanted in the film, this is also obvious that what was wanted was as much of a heightened sense of fun for the audience as possible. 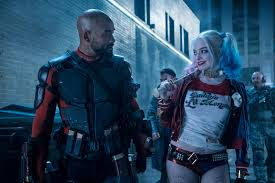 It cannot be denied even by the harshest critic that Suicide Squad does have it's moments where it is indeed fun, but in many instances they become too over the top and the amusement turns instead into a series of eye-rolls. Many of the attempts at humour are so obvious that they fall flat and some characters so stereotypical and exaggerated that they are cringe-worthy (especially Captain Boomerang, who is played by Australian Jai Courtney, but feels like a caricature of the stereotypical Australian). The soundtrack for Suicide Squad is extremely cluttered with a series of pop-rock anthems playing one after the other creating a sensory overload and annoyance with this bombardment. Such musical hits in a film should make the audience want to tap their feet and smile, not rolls their eyes and think "Not another one".

Although the screenplay does have a clear idea of where it is going and what it is saying, it is cliché and once again, far too obvious. How do you create a great villain when the whole film is about villains? Cara Delevingne does as well a job as she could with her character of Judy Moone who morphs into the Enchantress. While she is actually quite likable as Moone, Enchantress is not only a dull villain for the film, but is also an extremely overused type of enemy and is the female version of one in another superhero film from earlier this year, X-Men: Apocalypse. With such a cliché villain comes a disappointing cliché storyline and ending.

The best part about the film is undoubtedly Margot Robbie's Harley Quinn and this in itself is a reason to celebrate. This is Harley Quinn's first cinematic live-action venture and the film is undoubtedly hers. Robbie herself shines as she plays a role with a huge amount of character and all attention is on her in every scene she is in. Out of all the members of the squad, she has the most screen time and the most extensively covered backstory. This can be assumed as one of the things that Ayer decided the film needed to have more of after test-runs. Harley Quinn is the source of the large majority of laughs and really almost everything that comes out of her mouth is meant to be amusing. Luckily, she is such a great character that this isn't too much of a problem, but it is obvious that she appealed greatly to test audiences as she will larger audiences. 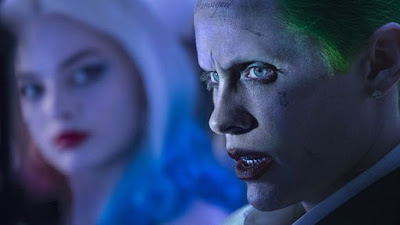 Along with Harley Quinn comes the Jared Leto portrayed Joker. The unfortunate thing for Leto and anybody who was ever going to sign on the play The Joker was that nothing could ever stop comparisons to Heath Ledger. Leto does what he can with the role and he does well under the circumstances. His character has the menace of Ledger's Joker, but the colour of Jack Nicholson's, which is the way he has been directed and it is just a shame that the role comes with embedded comparisons so that Leto cannot be praised in his own right.

Leto's case is not helped by the amount of editing his character has. Even before Leto confirmed that a great deal of the Joker's scenes did not appear in the final cut of the film, it is obvious. The Joker is one of the most popular villains in the DC universe and his role is edited so much that it feels as though he has only been included as he is Harley Quinn's boyfriend. According to Leto, there was enough footage shot of the Joker for he to have his own film and this is more than believable as so much is left unspoken of. Although there are no guarantees that the film would have been better with more Joker in it, it does suffer from it's obvious editing as no one should be able to acknowledge editing in the final product and this contributes to it's uneven execution and sloppy finish.

Suicide Squad tries and tries hard to be a spectacular film event. Unfortunately, the film which David Ayer wants it to be is not the film that audiences wanted it to be. Suicide Squad will owe it's staying power to the force that is Harley Quinn and falter because of it's over-exaggeration, sloppy creative choices and unwarranted editing,