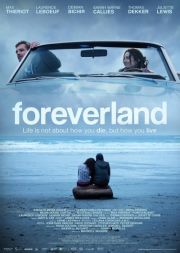 Foreverland
Year: 2011
Director: Max McGuire
Cast: Max Thieriot, Laurence LeBoeuf, Demian Bichir, Juliette Lewis, Thomas Dekker
Once in a while, a film comes along which is evidently made with an avalanche of passion and is truly a joy to watch as a result of this. Foreverland is one of these rare films.
Currently making its way around the film festival circuit in North America, Foreverland is intriguing, compelling and takes you on a journey filled with emotion through the eyes of a unsung hero.
Will Rankin (Max Thieriot) is not your typical twenty-one year old, he has cystic fibrosis. Will lives every day looking into a bleak future where all he can see is death, which is amplified by watching those who have gone through the same thing die around him. When one particular friend, Bobby (Thomas Dekker) passes away, his sister, Hannah (Laurence LeBoeuf) visits Will with her brother’s last wish. With that, Will and Hannah embark on a road trip of discovery to a healing shrine in Baja, Mexico. Will’s first trip away from home brings discovery and the realisation that death isn’t all that awaits him.
Foreverland is captivating from the beginning to end. Not only is it entertaining, but also informative. It deals with a disease that is not spoken about in great detail in the media, especially in film. The film gives the audience a renewed admiration for the victims and survivors of cystic fibrosis and their families, who feel the impact of the disease almost as much as the sufferers. Director, Max McGuire has bought his own experiences and that of those around him to the film to build a highly realistic and accurate picture of what life is like for those affected by cystic fibrosis.
The journey of the Will and Hannah down the Pacific Coast Highway is particularly memorable. McGuire captures the beauty that America has to offer and shows that you don’t need a Hollywood blockbuster budget in order to capture true beauty on screen. His choice of locations along the way put parts of America into focus one would not normally pick as highlights of a road trip, but they fit perfectly into the film.
Max Thieriot is the perfect choice for the lead of Will. His performance leaves nothing to be desired as he puts his all into his portrayal of a young man who goes on a journey of self-discovery, while still feeling restrained by his condition. He is believable and a heroic in his role.
Laurence LeBoeuf gives a wonderful portrayal of a beautiful character who is strong, yet fragile from what she has seen and endured through her brother. LeBoeuf is extremely likable in her role and very real. Demian Bichir, Academy Award nominee for A Better Life, is an absolute treat to watch, as is Juliette Lewis.
Foreverland is one of a kind. The type of film you want to see every time you walk into a cinema. The type of film that keeps you entertained and pulls at your heart strings, but at the same time doesn’t let you get lost in misery by letting you see how beautiful life is.
8.5/10


Foreverland premiered at the Palm Springs International Film Festival on the 12th of January and screened to two sold out performances. Following our viewing of Foreverland, Movie Critical was lucky enough to be able to interview director, Max McGuire.

Hi Max! Thankyou so much for agreeing to answer some questions about your movie, Foreverland. Congratulations on making such a beautiful film! These must be very exciting times for you with Foreverland making its way around the film festival circuit, especially with two sold out showings at the Palm Springs Film Festival! What’s next for the film?

Hi Nicki! Thanks for the opportunity to talk to you! I'm glad you enjoyed the movie. It truly is a passion project, and it's so flattering to see it being so well received.

After Palm Springs, Foreverland is screening at the Victoria Film Festival back in Canada on February 5, where Matt Frewer who plays Mr Steadman, and I will be in attendance. I'm very, very excited to attend that festival as we shot a large part of the movie on Vancouver Island, where the festival is taking place.

Also we're currently exploring and entertaining American distribution deals at the moment, we're trying to figure out how best to get the film out to as many people as we can!

Where did the inspiration for Foreverland come from?

I myself, like Will the lead character have Cystic Fibrosis (CF). So naturally it's infused with many personal elements.

The story itself stemmed from a few darkly serendipitous occurrences. I grew up with a group of peers with CF, back in 2005 the last remaining survivor of my sister and I's “generation” passed away (one of my two sisters has CF as well). I then had an appointment where my lung function test over time showed I was dropping, for a brief moment I wondered if it was the beginning of the end – turns out I just needed to work a little harder, but I was left with some darkly comedic ideas about planning my own funeral. This was eventually massaged into the Steadman funeral home scenes by Shawn Riopelle my co-writer!

How much research was involved in the initial stages?

As I mentioned above, most of our CF information and relative research were mined from my lifetime of living with the illness. Between my life in and out of hospitals as a child, my parents experiences raising my sister and I, and my lifetime of dealing with our medical team, we were well equipped to tell this story.

I also have a sister who doesn’t have CF, we wanted to address the idea that an illness doesn't only affect the sick child, as the whole family's existence is controlled by the health regimen of the one with CF.  Regular hospital visits instead of playing with your friends, physiotherapy treatments that control the TV remote control, family trips planned around insurance and accessibility of care... Everything, so in our story Hannah truly understands Will, she's been there, done that, and doesn't accept his cop out attitude that nothing matters.

Rather than be strictly informative about Cystic Fibrosis, my writer Shawn and I wanted to explore what it's like to have a mid life crisis at 21, and the effects of learning to hope and the consequences that come with it.

How long did it take you to film Foreverland? Was the process gruelling, or fulfilling?

We had 22 days of actual principal photography, but the film took 6 years to make from conception. So many highs and lows along the road, ultimately ending in the high of watching the film with extremely gracious audiences at film festivals, and eventually the general public. It's very fulfilling to watch people laugh and sometimes even cry at scenes or sequences that were once just ideas Shawn and I talked about in my parent’s basement. Every day on set was truly inspirational, to wake up early arrive to work and see so many people already working to help make my vision a reality is quite a trip, and responsibility I didn't take lightly.

What would you like audiences to take away from Foreverland?

If people are entertained I'm happy, if they feel touched by the story I'm ecstatic, if they feel inspired to try to squeeze more out of their life, I'm humbled - there's not much more one could ask for when they try to tell a story that means something to them.

What has been the highlight of your journey with Foreverland so far?

Every milestone was a highlight worthy of a celebratory family dinner, sometimes prematurely (false starts are big time bummers).

Getting green lit for production, and our world premiere both stand out, so far.

I'm truly impressed and ecstatic every time we get a chance to show the movie, we've been lucky that we've been so well received at all of our screenings. Seeing people line up for  our picture is surreal every time, especially considering at one point I thought was going to make it on credit again.

This is only your second film. How was making Foreverland different from making Crossing The Wake?

I'd venture to call Foreverland my first feature with a budget, though Crossing the Wake was an awesome learning experience, it was really my version of film school. It was shot over 9 days on a credit card, it sold somewhere in Eastern Europe... The biggest difference in making Foreverland was having a budget that enabled us to secure essential elements like a super talented crew, fantastic locations,  pedigreed actors (like our Oscar nominees Juliette Lewis and Demian Bichir and Max Thieriot and Laurence Leboeuf), and more days of shooting. Not to mention catering was way better when you had amazing cooks taking care of your dietary needs every day.

The extra money also came with some restrictions such as the inability to improvise a day if the opportunity arose, for instance, packing up and moving locations with 40 people in tow is not that easy! Or the fact that dozens of people were on email chains associated with creative elements, whereas on a five person nine day shoot, you do what you want... There's a lot more compromising when you start to play with other people's credit cards.

Have you started to think about your next film after Foreverland?

I'm currently in LA promoting Foreverland at festivals and abroad (thank you!), as I take meetings with agencies and managers in search of the right team that'll help me find my next project. I humbly announce here that I'd happily settle for something between American Beauty and Swingers... haha. For now I'm just trying my best to enjoy the ride that is Foreverland!

Any chance of bringing Foreverland to Australia as of yet? Would love to see the film released here!
We have a small but strong contingent of CF supporters in Australia, we'd love to show the movie there! Hopefully our international sales agent can make it happen, I'd love to come check it out, as I also have some family there, who'd love to see it!

Thank you to both Michelle Czernin Von Chudenitz-Morzin and Jessica Kill of Popular Press Media Group (PPMG) and to Max McGuire for the opportunity for Movie Critical to be part of Foreverland’s journey.
Posted by NP1982 at 5:09 PM 4 comments: