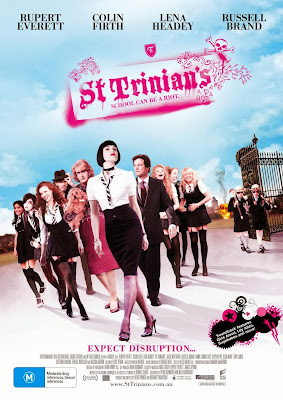 There is only so long you can go as a film reviewer before you feel that you absolutely must tell the world why you love one of your guilty pleasures.

St Trinian's is perhaps my biggest guilty pleasure. It is the movie I put on when I don't know what I feel like watching. It is the film I watch when I need a bit of a laugh. It is the film I watch when I want to see all these great actors in one place. It's the film I watch when I just want to have some fun and not be challenged in any way shape or form. It's may not be the best made film and it won't feature in any "Best of" lists, but this doesn't detract from the enjoyment it gives me and so many other people. Does this make St Trinian's a cult classic? It could well do. Honestly, I don't think I will ever get sick of watching this film over and over and I have no shame in saying it. Nor do I think I will ever stop quoting Tasmin Egerton's lines over and over.

Before I go into detail about why I love this film so much, here's a quick run through about St Trinian's. St Trinian's is an English boarding school for girls, but not just any girls. The naughtiest and unruly girls. By their own definition, they are the defenders of anarchy. As for the teachers, they are the teachers who can't find a job anywhere else. Headmistress Ms Camilla Fritton (played by Rupert Everett) is known to the area as the one who lets her girls run wild and do whatever they want, yet she believes she is looking after her girls who have nowhere else to go. Yet, St Trinian's is about to make some changes, starting on the day which Ms Fritton's estranged brother, Carnaby (also played by Everett) brings his bullied daughter, Annabelle (Talulah Riley) to St Trinian's. Head girl, Kelly Jones (Gemma Arterton) is on hand to welcome Annabelle and after introducing her to all the cliques, reveals that the First Year's are taking bets about how long she will last. The girls over hear a conversation between Ms Fritton and the bank manager and find out that their school is in dire straits financially and may close down. The girls take matters into their own hands and hatch an extremely elaborate plan to save their beloved school. 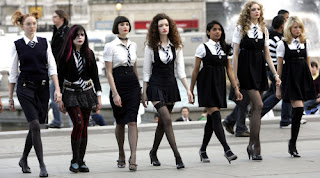 So why do I love St Trinian's so much? The film, based on the cartoons by Ronald Searle, opened in 2007 to mixed reviews. It has a 5.6 rating on IMDb and 31% on Rotten Tomatoes. This doesn't sound enticing at all at the moment, does it? Yet, there is so much to love about it.

When I went to the Australian premiere of Hansel & Gretel: Witch Hunters in January this year which Gemma Arterton, I overheard a fan say to her "You were great in St Trinian's!" and she replied, "Thankyou. It's a real girl power film".

And that it is. The audience for St Trinian's may predominantly be female for this reason. Obviously the majority of the cast is female (even Rupert Everett is playing a woman for the large part of the movie) as it is set in a girls school. Even though this is a school for bad girls, the characters maintain the image of being unruly without crossing the boundaries into them being described as crude or inappropriate. Although they speak of bombs and explosives, they are not particularly violent either. They are more just mischievous than anything else, and it is welcome for them to be so. St Trinian's is very much the English brand of comedy. If you are not a fan of British comedy, this is probably not for you, yet it is perfect for those that are. The girls antics throughout the film are very, very funny and the script is hilarious.

And the masterplan they hatch! Brilliant! It is so elaborate, colourful and fun. They combine the competing in a televised school game show with a heist in order to save their school and although it may be predictable, is just great fun to watch. The soundtrack is also extremely foot tapping and head bopping.

Rupert Everett
The role of Miss Fritton was played in the earlier St Trinian's films (released in 1954 and 1957) by Alastair Sim. But what must have Rupert Everett thought when hewas approached to play both a male and female in the 2007 St Trinian's? No matter what he thought or what it sounded like, it works! This isn't a case of Everett playing a man in drag either, you completely forget after awhile that Miss Fritton is actually a man! The love story between Fritton and Colin Firth's Geoffrey Thwaites is over the top, but a riot when you do remember that Fritton is a male. One of the funniest parts of the film is when Geoffrey see's her/him for the first time in years and the vision of Fritton in her bright pink running suit is accompanied by "Love Is A Many Splendored Thing" by The Four Aces. For all of you playing at home, here is a little bit of trivia courtesy of IMDb, the character of Camilla Fritton is modelled on the Duchess of Cornwall's image and mannerisms. 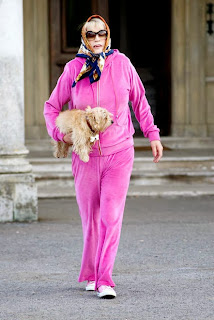 Colin Firth
Love Pride & Prejudice? Will love St Trininan's. The film is absolutely covered in references to Colin Firth's role as Mr Darcy Austen classic. When appearing on the hockey pitch again, his emergence is reminiscent of that of Mr Darcy appearing at the end of Pride & Prejudice. Miss Fritton's dog, who Geoffrey is the cause of it's demise, name is Mr Darcy. There are also quite a few references to another film of Firth's, The Girl With The Pearl Earring. In one scene, there is a classic line by Antonia Bernath's Chloe who when looking at the painting says "Wow, you can so see why Colin Firth wanted to shag her". 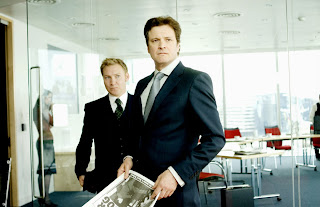 Lena Headey
While these days Lena Headey is most well known for her role as Cersei in "Game Of Thrones", we saw her play a polar opposite character in St Trinian's. Perhaps the most well behaved character of the film, Miss Dickinson is a far cry from Cersei Lannister. She is the goody-goody newest teacher of St Trinian's who is dying to see the girls take part in School Challenge. Headey has been around for a long time and is an extremely versatile actress. This film shows off her versatility in a character who is meant to be boring in behaviour compared to the others, but is still such a great character with a whole lot of character. 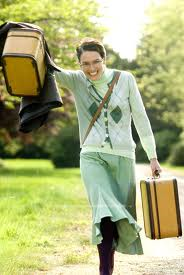 Russell Brand
﻿
Russell Brand plays Flash, another character who made his first appearance in the earlier St Trinian's films as played  by George Cole. Flash is the girl's crime consultant if you will. St Trinian's is essential viewing for any Russell Brand fan as the type of comedic dialogue he uses is very much his own. Brand's Flash is very much a superstar to the girls, as he is in real life. Perhaps his funniest scene in St Trinian's is his meeting with Carnaby Fritton in his art gallery when he is pretending to be an elusive and gay art dealer.

Talulah Riley
Talulah Riley is the perfect leading lady as Annabelle Fritton. She has the ability to play the bullied schoolgirl convincingly before switching to play a true St Trinian. She is a completely different character at the beginning of the film compared to at the end and that is a true example of the evolving of a character. She never stops changing throughout the film. Like Firth, Riley also provides another Pride & Prejudice reference as she played Mary Bennett in the 2005 film. Riley also appeared in the sequel, St Trinians 2 where Annabelle is named head girl.

Gemma Arterton
For the now globally famous actress, this was her breakthrough role. Gemma Arterton played head girl Kelly Jones and was absolute perfection. Many still credit this as being Arterton's best performance to date. She is undoubtedly the leader of the girls and is absolutely convincing as it. She, like Riley, has complete star power in St Trinian's.

Tamsin Egerton
Tamsin Egerton plays Chelsea, the leader of the Poshy Totty, a group of girls who run a chat line and all claim to have slept with a member of the royal family. Chelsea is believed to be the tarty airhead, but there are signs throughout the film that suggest otherwise. Egerton is wonderful in this role and is one of the most memorable characters. She delivers some of the funniest lines of the film and her final scene of School Challenge is pure gold. She is gifted with perhaps the best line of the film when she says "You want to steal...Scarlett Johansson?"

Paloma Faith
Paloma Faith plays St Trinian school girl, Andrea, who is the face of the Emo clique. Faith, who is nowadays better known as a successful UK pop/jazz singer with signature flaming red hair, is seen in a completely different light here than how we are now used to seeing her. She is also great fun to watch as she is more disturbed than actually an angry Emo chick, but also changes throughout the film to become a little less Emo in attitude.

Lily Cole
Another star who we see in a completely different light in St Trinian's than we normally see is supermodel, Lily Cole. Cole plays Polly, the leader of the Geek clique of St Trinian's. Absolutely convincing, until the scenes where you see he standing next to he co-stars and she is towering above them with her 5'10" frame. Holly and Cloe Mackie
I love these two girls! Twin sisters who play first years, Tara and Tania are referred to by Arterton's Kelly as "Winchester's answer to The Sopranos". They are wise beyond their years, but also a whole lot of first year trouble. The girls were only ten years old when they appeared in St Trinian's and were absolutely hilarious. You know it shouldn't be adorable, but it is here when in a little ten year old voice you hear "You were only supposed to blow the bloody doors off!"