Top 10 Films To Watch on Halloween 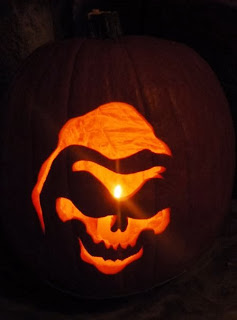 One thing I absolutely miss about living in the United States is Halloween. This isn't to say that we don't celebrate Halloween in Australia, but it is nowhere near as big a deal. I miss it being a big deal!

I experienced my first real Halloween in 2008 when I was living in Los Angeles and studying at California State University Long Beach for a semester. I have to admit that Halloween was one of the things I was truly excited about when starting on my journey and it did not disappoint. Halloween parties were in full swing all through the week and I never knew that there was such thing as haunted mazes until I saw the ones opening up at the Queen Mary, Universal Studios, Knotts Berry (Scary) Farm and Griffith Park. It was the Halloween decorations on some of the mansions along the shore and also at Disneyland which really got me excited.

I did have my first (and only) Trick or Treat experience in which my roommate (who was also Australian) and I took to the streets of Huntington Beach in our costumes as a pirate and a flapper. Everyone was pretty understanding and accepting of the idea that these two Australian girls were on their first Tick or Treat, apart from one neighbour who at first told us that we were a little too old to be doing this and when we told her that we were from Australia, she said "Oh yeah, I can do that too" in the worst possible Australian accent.

Five years on I am still confused whether she was joking or not. All I know was that she couldn't imitate our accents to save her life.

So being in Australia and not being able to celebrate Halloween as much as I would like, Halloween is reserved for watching a scary or Halloween themed film. This year I decided to help those who are in the same position as me, or just want to have a low key Halloween. Plus Halloween this year is a Thursday so chances are most people will be doing all their partying over the weekend and will be working on the Friday afterwards.

We have tallied up the votes collected and put together a list of the top ten films to watch on Halloween. Nearly 80 films received votes and all types of films were represented. There were classic horror films, B grade horror, family friendly films, animation and thrillers. However, the film that has received the honour of being the top film to watch on Halloween has won by an incredible margin. Please note that this top ten is the results of the public voting and the films and order in which they appear has not been altered in any way.

Halloween doesn't always have to be a serious movie night and nobody says you can't have a laugh. Shaun of the Dead is the creation of Simon Pegg and Edgar Wright and a parody of such zombie films as Day of the Dead and Dawn of the Dead. Shaun of the Dead is the perfect mix of comedy and horror, as there are still a lot of blood, gore and frights as well as plenty of laughs. Shaun (Simon Pegg) is an ordinary guy, not quite everyone's favourite person and especially not in girlfriend, Liz's(Kate Ashfield) good books. However, he has to find his inner superhero when he tries to save his family and friends from the zombie apocalypse.

Saw caused quite the sensation when it came out in 2005, and like all horror/thriller films which cause a sensation has been followed by six follow-up films (the latest being Saw 3D in 2010). A film absolutely not for the faint hearted, Saw is incredibly suspenseful and intriguing. It is just like a car crash, you can't look away no matter how bad it gets. Two men wake up and have no recollection of what happened, where they are, who the other one is and why there is a dead body between the two of them. They have to play by the twisted rules of a serial killer only known by the name Jigsaw if they are to survive.

When The Texas Chain Saw Massacre was released in 1974, it became an instant horror sensation. Gruesome and terrifying, the film has the ability to cause nightmares in anybody who watches the film, because what could possibly be scarier than a serial killer with a chain saw as his weapon of choice? What was even more scary at the time was the persistent rumours that it was based on a true story, this is only partly true. The film is based on true events, but not an actual true story. In The Texas Chain Saw Massacre, five teenagers take a trip to their grandfather's house and are hunted by a man only known as Leatherface and his cannibalistic followers.


A Nightmare on Elm Street gave birth to one of the most famous and scariest horror film villains of recent time, Freddie Krueger. Krueger was an evil man who preyed on children in his life, but after he is killed by outraged parents, he starts coming for their children where nobody can protect them...in their sleep. Krueger is one scary man with his scarred, burnt skin and knives for fingernails and he comes for you where you can't be saved. A Nightmare on Elm Street is extremely creepy, but on the brighter side, you do get to see Johnny Depp in his first ever acting performance.

No one can deny that The Exorcist is one of the scariest, if not the scariest movie of all time. However, it does rank as also being one of the best films of all time and was the first horror film to be included in the Best Picture category at the Academy Awards. What makes The Exorcist so scary is that it is the unseen enemy of the Devil that takes possession of a young girl, Regan (Linda Blair). Regan becomes unrecognisable and it is terrifying to see such a pretty young girl turn into such a monster. The fact that it is such a wonderfully made film only adds to how terrifyingly real it feels.

Now for a completely different change of pace! Halloween is a big day for kids as well and Halloween is not always about scaring yourself silly, but also having a bit of fun. Halloweentown was released as a television movie in 1998 and gathered quite the following for adults and children alike. In the first movie in the Halloweentown series,  Debbie Reynolds plays grandmother Aggie who is from Halloweentown and visits her grand-daughter, Marnie (Kimberly J. Brown) to teach her how to be a witch. Marnie and her brother and sister travel back to Halloweentown with Aggie in order to face the danger that is lurking there.

Based on the book by the Master of Horror himself, Stephen King and directed by the great Stanley Kubrick, The Shining is incredibly creepy and spooky. Set in an abandoned hotel which a writer, Jack Torrance (Jack Nicholson) and his wife, Wendy (Shelley Duvall) and son, Danny (Danny Lloyd) move into for the winter and it isn't long before strange things begin to happen and Jack starts to turn into a violent monster. The Shining is like watching a nightmare with creepy and unsettling images throughout the film which have since become famous. The most memorable being the twin girls in blue and Jack Nicholson's "Here's Johnny!"

It couldn't be a Halloween film list without Halloween. This is the ultimate horror Halloween classic as it encompasses both the night of Halloween and real horror. It's a relatively simple story with an incredible amount of suspense and terror. On Halloween 1963, a young boy by the name of Michael Myers kills his sister in cold blood and is locked away in an institution. It isn't until 15 years later that he escapes and brings terror back to Haddonfield, the scene of his crime. Myers is one scary villain, as he never says a thing and wears an ice hockey mask. The ultimate Halloween slasher film!

The Nightmare Before Christmas is a favourite animated film of many people and comes in at number two on our top Halloween films. Nothing like your traditional Halloween film, Tim Burton's film combines the holiday with Christmas, making The Nightmare Before Christmas both a Halloween movie and a Christmas movie. Jack Skellington is the hero of the film and king of Halloween Town. He gets bored of doing the same thing every Halloween and after stumbling on Christmas Town, decides to combine the two holidays. The result is of complete mayhem, but a wonderfully creative, original and memorable film.


At number one is 1993's Hocus Pocus, which is only fitting as this Halloween marks the film's 20th anniversary. Hocus Pocus is a truly wonderful Halloween film with it's holiday atmosphere, great story and flawless characters. When Max (Omri Katz)  and his younger sister, Dani (Thora Birch) move to Salem, they immediately hear the story of the Sanderson sisters who were witches hung hundreds of years ago. Legend has it that if a virgin lights the Black Flame Candle,  the sisters will come back to take the lives of all the children in Salem. Max, of course, doesn't believe this, and lights the candle as a joke. He soon realises that it is more than legend when the Sanderson sisters walk through the door and puts every child, including Dani in danger.

Hocus Pocus is another Halloween film which the whole family can enjoy. The film catches the essence of Halloween the way it is celebrated in a community, while also having a scary (but not too scary) side. Bette Midler plays head sister, Winifred Sanderson and is wonderful. Sarah Jessica Parker and Kathy Najimy played sisters Sarah and Mary and the three of them have amazing on screen chemistry. This is perhaps Sarah Jessica Parker's best role. No disrespect to her Carrie from Sex & The City, but she plays a completely different character in Hocus Pocus and is truly hilarious.

The 19th of October saw the films 20th anniversary and a screening was held at Walt Disney Studios in Burbank, California. Please see here to check out all the action and see photos of some of the stars 20 years on.

HAVE A WONDERFUL HALLOWEEN EVERYONE!

Thankyou to everyone who voted and to Nicole Voigt for helping out with the voting.