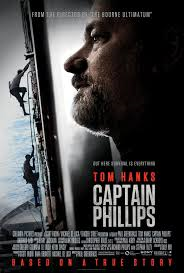 Captain Phillips is to be released in Australia on the 24th October 2013 and is distributed by Sony Pictures. Now showing in the USA and UK.

Captain Phillips is a high paced, suspenseful film based on the true story of sea captain, Richard Phillips.

Being a true story, Paul Greengrass' latest film does what many suspense films fail to do and that is remain realistic while maintaining tension. It is also an incredible thing for a film to remain so suspenseful while being a true story, as being a true story will often mean that people know  how it will end. Although Captain Phillips is not a film without flaws, it is remembered far more for what it does right rather than what it does wrong.

In April 2009, an American cargo ship was making it's way along the Somali coast to Kenya at a time when there was an increasing number of pirate attacks. The Maersk Alabama is targeted by a group of Somali pirates as it is not travelling with a herd of other ships and therefore makes an easier target. Four pirates hijack the ship taking crew members hostage, among them being the ship's captain, Richard Phillips (Tom Hanks). While protecting his crew, Phillips risks all to make sure his men and his ship remain safe.

Captain Phillips does not for one moment feel like it is it's 134 minutes long. There is never a dull moment throughout the film and it constantly flows at a steady pace. Nothing is included in the film that doesn't need to be there as a result of a very clean cut screenplay and skilful editing. When the Maersk Alabama was hijacked now over four years ago, it was a huge event as no American cargo ship had been hijacked in 200 years. Therefore, the story of Captain Phillips and his crew is quite a well known one. It is not an easy thing to do to make a film out of a true story and generate suspense equivalent to what the audience would feel if they didn't know the outcome. By being a true story it does also avoid the pitfalls that many suspense films fall into, which is that of coming close to the end so many times that it loses it's realism. Although the story's credibility has recently come into question as a result of differing stories from the actual crew of the Maersk, Captain Phillips does not feel as though it is trying too hard to build tension and does do naturally. 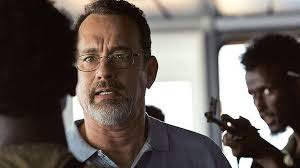 Visually, Captain Phillips is quite well done. People who suffer from seasickness will not be bothered by the film, as there are far more things to worry about than the state of the water. There are some scenes in which you feel you are in the lifeboat, but there isn't the effect of feeling as though you are on the choppy sea. Some camera movements are a little too quick to be able to allow you to focus, but this doesn't do too much in taking away from the situation at hand.

The film is very much a one man film. There is really no time taken to get to know any of the other characters in the film besides Captain Phillips. This isn't really a major problem, but it does mean that the film lends itself to a type of Hollywood heroism in which they are trying to go above and beyond in glorifying the main characters. Based on many recent articles regarding the inaccuracies of the film in regards to Captain Phillips himself and his behaviour, it would seem as though there has been an attempt to make Phillips out to be more heroic than he actually was in the circumstances for the sake of a film. We gain tiny glimpses into the lead pirate, Muse's life and personality, but it feels as though we still don't really know as much about him as we should by the end of the film.

As it is a one man film, Tom Hanks has a big task in holding his own throughout the film. He does so brilliantly. He does have the air of being slightly arrogant and distant from his crew, but he is a very strong character. His best acting of the film is absolutely in the last 20 minutes when all his walls come down, but no one can deny that Hanks gives a solid performance throughout the film. He's beginning scenes with Catherine Keener, who plays his wife Andrea, are particularly enjoyable as they show the human side of his character away from the ship. Barkhad Abdi, who plays Muse, also is commendable, as is Barkhad Abdirahman who plays Bilal.

Captain Phillips is a suspenseful survival film which keeps you constantly wondering how things will eventually pan out, whether you know the answers or not. Tom Hanks' powerhouse performance is one of the must sees of the year.