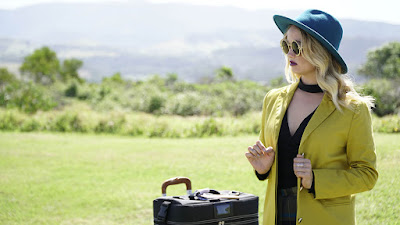 While there are not a great amount of teen flicks released theatrically each year, these days it is hard to come across one that is clean and simple, but at the same time is able to promote an important message in a captivating way for this age group. The large majority of teen flicks aim towards those in the later teenage years and neglect the younger spectrum, which in turn can have the negative side effect of 10-15 year old girls wanting to grow up too fast to be like the characters they see on screen.

The concept of wholesome family entertainment is still important and Rip Tide reminds us why. Rhiannon Bannenberg's film promotes valuable lessons for it's target audience such as remaining true to yourself, following your dreams no matter what anybody else says and always being kind to others. Georgia Harrison's screenplay is simple and perfectly catered towards the target audience, yet for older audiences it could be a little too watered down at times. From the opening scene which flashes through Cora Hamilton's (as portrayed by Debby Ryan) modelling success, the film is perfectly catered towards it's female teenage audience with simplistic dialogue and a protagonist who any young girl can relate to. 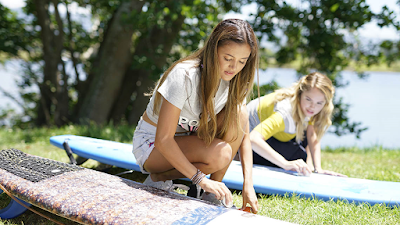 Rip Tide also sets a grand example not only for young female girls, but for women everywhere. The film is directed and written by women with a strong cast that is predominantly female. The great thing is that none of these female characters are atypical or shrinking in the shadows of their male co-stars. Debby Ryan here proves that she is a great deal more than a Disney darling with a confident, natural performance of a character that is dedicated, hard-working and ambitious yet has a sweet naivety to her. Both Genevieve Hegney and Danielle Carter plays exceptionally strong characters, but it is Naomi Sequeira who owns the show as surfer girl, Chicka. She steals every scene she is in with her adorable sense of humour and her portrayal of the girl everybody wants to be best friends with.

It is a truly wonderful thing to have such a female driven cast, but the male characters are left exceptionally underdeveloped. There are also several questions left unanswered including where Cora's father was in all this?

The film was shot in it's entirety on the New South Wales south coast and is a celebrated location as it makes the most of the opportunity to showcase the Illawarra region's beautiful beaches and the Australian surf culture. By having the film set here, it sets itself apart from other teen flicks of the recent years and makes Rip Tide atmospheric and fun with it's visions of the ocean accompanied by images that accompany the surfie lifestyle.

Rip Tide knows it's audience and does everything that it can possibly do give them the film experience that they need and deserve. It is a film that will not resonate as greatly with older audiences as it will younger, but one we can all be grateful for. 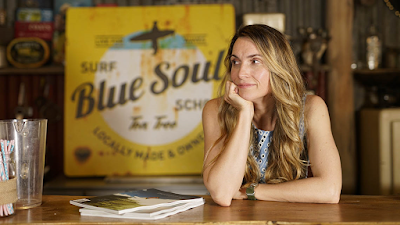