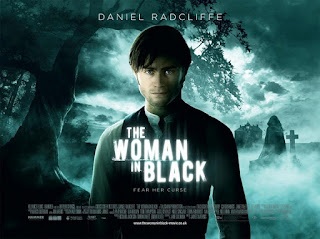 Before I begin my review….
Let’s have a quick chat about the horror genre.

Some people are completely obsessed with the horror genre and others flat out refuse to see anything that remotely resembles a film of this nature.

Why? The main reason for this is that some people love the adrenalin rush when experiencing the scares and thrills in a horror film. It’s the same sort of feeling you get when you go on a rollercoaster and they also have their lovers and haters. Not that I am saying that everyone who loves horror movies will also love rollercoasters.

Then some people don’t like that rush of all these extreme emotions that a horror film gives you and cannot understand why people like to be scared. Me? I’m a fan of good film making, if it means being scared in the process, so be it!

Another reason why some people may dislike horror films is what which I didn’t think of until I saw The Woman In Black is that horror films aren’t notoriously known for having conclusive endings. So if you are someone like my husband who likes to leave a movie feeling fulfilled, you are typically not going to like horror films. They are known for more often than not ending with an ending that isn’t really an ending.

Not all horror films do this and that’s not what I am saying, but it does seem to be a recurring feature of the modern horror film. I understand why this is a feature of horror films, as the film makers want a horror viewer to leave the film still on edge and to take with them the feelings that the film aroused outside the cinema.

So it’s really up to the individual whether you roll that way or not. Each to their own.

Review
The Woman In Black is a best-selling novel, a stage play which has had a 23 year stint on West End and……a not too bad film.

The Woman In Black seems to have attracted the majority of its popularity from being the film in which Daniel Radcliffe grows up and steps out of his Harry Potter persona. However, Harry Potter is the last thing on the audiences mind when being transported back in time to a spooky village where the ghost of a woman in black terrorises the townspeople and brings danger to the lives of their children. It’s the stuff that nightmares are made of.

Widower Arthur Kipps (Daniel Radcliffe) is assigned the duty of seeling Eel Marsh House, a manor just outside a village which belonged to a deceased scorned woman. His night in Eel Marsh House turns into a night of terror as he soon realises that the house is haunted by its late owner and the deceased children of the townspeople. When he returns to the village after his night in the manor, Kipps arrives in the middle of a terrible tragedy involving a little girl. He then starts to believe the villagers that when someone sees the woman in black, she comes to the village to claim the life of one of their children.

Although The Woman In Black does provide jumps and goose bumps particularly in Kipps’ nights at Eel Marsh House, it is very slow to get going and can just be a bit too tame in parts. The film almost seems a bit sleepy and if it wasn’t for the night scenes, it would be a great film to have a nap in.

The story itself is not lacking, which is why the novel and the stage play are so successful, but it doesn’t quite have the elements to work on the big screen. Yet, it is executed well enough to make you interested in either reading the book or seeing the play. You can see how it would be interesting in these forms from watching the film.

However, there are some things that are worth staying awake for. For example, the film is visually beautiful and is a beautiful period film. Period horror films are not in great supply and for one to come along and be so gorgeous to watch is a great treat. It is just a shame it is just one of those films where the horror is only restricted to certain scenes.

The talking point of The Woman In Black cast is Daniel Radcliffe. Such actors as Radcliffe are typecast once they play an iconic role as he did with Harry Potter, but never once do you look at him throughout the film and think of the boy wizard. Radcliffe’s role of Arthur Kipps is not award winning by any means and is not the best performance he will give in his career, but it is indeed a good, solid performance. He has proved that he is versatile and capable of many other screen roles rather than just the one he has been made famous for.

The Woman In Black is one film which Harry Potter fans will still flock to see so people can see their beloved hero once again. There are elements of the film which are enjoyable, but it is otherwise forgettable and joins the list of books which are better than the movie.
6/10