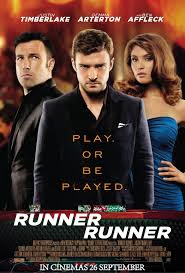 Year: 2013
Running Time: 91 minutes
Director: Brad Furman
Writers: Brian Koppelman and David Levien
Cast: Justin Timberlake, Ben Affleck, Gemma Arterton, Anthony Mackie
Runner Runner is now showing in Australia and is distributed by Fox. Also now showing in the UK and opening in the USA on 4 October 2013.
Runner Runner is the perfect definition of cinema mediocrity.
Neither bad, nor good and can't seem to move from that line right down the middle between the two. There is nothing terrible about it, but nothing mind blowing either. There is the potential for it to progress to the good film part of the spectrum, but the screenplay and Brad Furman's direction doesn't permit this advancement to take place and just let's Runner Runner become a completely forgettable film and a film all involved would rather forget.
Princeton student, Richie Furst (Justin Timberlake), who made the mistake of relying on his winnings from an online poker game to pay his college fees, travels to Costa Rica to meet with the man who's website he lost his money on. He believes there is someone on the site who is cheating people out of their winnings and wants to approach owner, the elusive Ivan Block (Ben Affleck) face to face to tell him. Block is impressed by what he learns about Richie and offers him the opportunity to work for him, which he immediately accepts. Richie has the time of his life in Costa Rica enjoying the high life and his new romance with Block's close confidant, Rebecca (Gemma Arterton), until he realises that he may have become involved in activities that are less than ethical and legal, and that he is also the one being played. 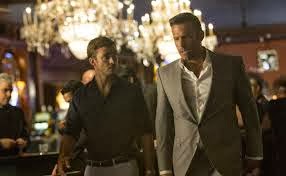 When you stand back and look at the breakdown of Runner Runner, you can see how much could have been done with this film. The combination of an uneventful screenplay and Furman not knowing what to do with the opportunities that are there makes this film not at all suspenseful and just bland. Sadly, the film seems to think that it is much more exciting than what it is. Everything points to the ending being some amazing breakthrough, except for the fact that there was no tension at all and nothing strong about the delivery. The dialogue is filled with metaphors rather than the characters just getting to the point and saying what they mean, which is both irritating and pretentious. It is as though the script is trying to make the film intelligent and clever, but just goes the opposite way.
Perhaps the only real saving grace which the film has is that it is quite attractive to watch. It makes Costa Rica seem like a perfect holiday destination and the high life which the characters are living does look visually attractive. Funnily enough, Runner Runner is a bit like a relaxing holiday itself. It is a little too laid back and it just coasts along through the 90 minutes. Qualities that are great for a holiday, but not so great for a film.The musical score isn't bad and reminds us that we are watching a thriller.
﻿ 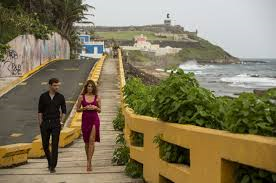 Justin Timberlake doesn't seem comfortable in this role. It doesn't feel as though he fits into the character at all and one feels that with another lead man Runner Runner may have been more of a success.. The first 15 minutes of the film are actually very reminiscent of his role in The Social Network, as it is his Sean Parker in college. He and Gemma Arterton have absolutely no on screen chemistry at all, and Arterton herself really doesn't have much to work with. Ben Affleck doesn't do badly in his role as Ivan Block, but there is so much more that could have been done with his role but he is just not given the opportunity. He has one scene where the mean streak in his character appears and it starts to get interesting, but at no time after that is he able to show that streak again. The film would have benefited so much more by the character going further and having an interesting villain, but Ivan Block isn't all that intriguing, even though you are waiting for him to be so.

One forgets that Runner Runner is supposed to be a thriller, in much the same way that people will forget that this film ever existed.


You may have also seen Justin Timberlake in....
The Social Network as Sean Parker

You may have also seen Ben Affleck in......
Argo as Tony Mendez