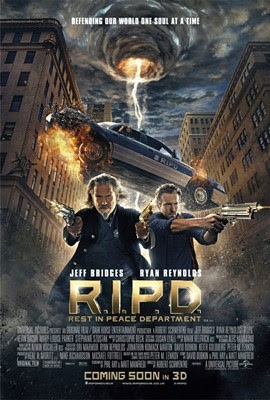 R.I.P.D. isn't the stuff that classics are made of, but that doesn't stop it from being an entertaining 96 minutes in the cinema.

Based on the comics of the same name, the concept behind R.I.P.D. is an enjoyable one. Although at first glance it may seem as though this a mash up of several past films, it's translation to the screen is seemingly original. The movie itself is not faultless by any means, but is action packed and amusing, helped along by Jeff Bridges' charismatic performance.

Boston police officer, Nick (Ryan Reynolds) is clearly not having a good day. What else can you call the day when he is called out to a job, only to find that his partner of five years, Hayes (Kevin Bacon) is actually one of the bad guys and shoots him dead? On his way up to be judged, he finds himself in the interrogation room at the R.I.P.D, the office of the law enforcement officers who have passed on but still return to Earth in order to protect them from the destructive souls who do not wish to pass on. Nick and his new partner, Roy (Jeff Bridges) set off back to Earth in pursuit of Hayes to stop his evil plan of bringing all these souls back to the world and unleash mayhem. 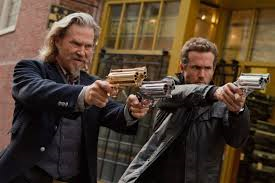 R.I.P.D. is entertaining, but not entertaining enough to be over-whelmed. The story is interesting enough to be intrigued and left in suspense as to what is going to happen. Let's face it, the actual outcome of the film is not unpredictable, but how they reach that outcome is. If you look too closely into the story, it does start to reveal the holes in the concept. This is especially true with the idea of the avatars and who can see what. .

At times, the cinematography can be amazing and the action sequences riveting. It truly takes advantage of 3D and scenes that involve the path between Heaven and Earth are amazing to behold. However, there are scenes where the CGI is extremely dodgy and unrealistic. Funnily enough these scenes almost every time involve Ryan Reynolds character looking a cross between a computer generated video game character and a doll. The use of music can sometimes be a bit over the top rather than having a positive effect on the film.

Ryan Reynolds performance is mediocre at best. He is pretty much void of emotion throughout most of the film and his character just a little too boring for the lead character and expected hero. However, it is Jeff Bridges who steals the show. His character is charismatic and full of life. Bridges has the luxury of being the one who delivers the best lines and most comedy relief in the film. Mary-Louise Parker is also amusing as Proctor and Kevin Bacon once again becomes a convincing villain.

R.I.P.D. is definitely more original than many other action films gracing our cinema screens presently and therefore makes it entertaining and a bit of fun. Cracks develop if you think about it too much so the trick is to just accept it for what it is and enjoy what you see.


You may have also seen Jeff Bridges in.....
Crazy Heart as Bad Blake
True Grit as Rooster Cogburn

You may have also seen Mary-Louise Parker in....
Red 2 as Sarah