The Mortal Instruments: City Of Bones (2013) 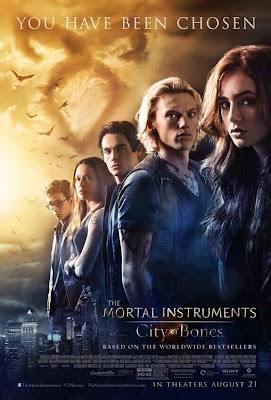 The Mortal Instruments: City Of Bones is now showing in cinemas everywhere.

Well, what a disappointment.

Anybody who would have read The Mortal Instruments books by Cassandra Clare will be able to confirm with you that this film is not a good representation of the first novel in the series which it is based on, City Of Bones. Not only are there so many things which are changed for the film which clearly don't work, but the screenplay is atrocious. All the potential in the world hasn't been able to save The Mortal Instruments: City Of Bones from being little more than a less than impressive and not very clean cut mash up of every young adult fantasy/romance book to screen we have seen in recent times.

Clary Fray (Lily Collins) is a seemingly ordinary New York teenager, but it soon becomes obvious that there is nothing ordinary about her when she starts to see things that her best friend, Simon (Robert Sheehan) can't see, draws strange symbols subconsciously and her mother, Jocelyn (Lena Headey) goes missing in mysterious circumstances. She meets shadowhunter, Jace (Jamie Campbell Bower) who is the first to inform her that she also has shadowhunter blood and he and his friends, Alec (Kevin Zegers) and Isabelle (Jemima West) agree to help her find her mother. Clary and Simon enter into a world they never knew existed and neither of them will ever see anything in the same way again. 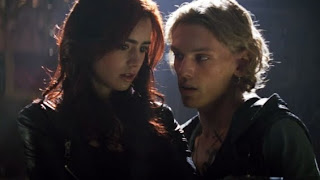 For how much potential there is here, The Mortal Instruments: City Of Bones is just ordinary no matter how hard it tries to be something special. And try it does. Director, Harald Zwart is fond of trying to give scenes importance when they really don't feel as though they are by means of slow motion and the aid of a wind machine for the character's hair to create dramatic effect. The film has no feeling of importance for the large majority of it and lacks suspense tremendously.

The only thing really saving the film is the fact that Cassandra Clare's story is interesting enough and this does make the film succeed in some way as you feel as though you simply must watch the next film to find out all the answers...even if you barely tolerated the first film. While Cassandra Clare's story provides a solid basis for the film, the adapted screenplay by Jessica Postigo is it's undoing. The changes made for screen just do not work at all and the dialogue spoken by the main characters is weak and bland. Even the lines which are obviously supposed to have comedic value are just a little too predictable and just not funny at all. Zwart's direction and Postigo's writing are individually the wrong choices for the film and the mixture of the two is the reason for the film's failure. It is not strong enough a film to break through the mould and be seen as just another teen supernatural flick.

Visually, The Mortal Instruments: City Of Bones is not a complete failure. Some of the CGI does not seem completely realistic, such as when Isabelle pulls down the chandelier in the vampire attack scene, but for the most part it is convincing. As previously stated, it does try to enhance the atmosphere and emotion of it's scenes using particular filming techniques and musical scores. Perhaps the scene that does benefit from this the most is again the vampire attack when because of it's editing and entertaining battle choreography. However, for the most part, many of these scenes just feel overdone with the aid of it's cinematography. Yet, sometimes it does pose as a reminder that the scene MAY be important, but more often than not still doesn't achieve this and the scene still doesn't feel special. 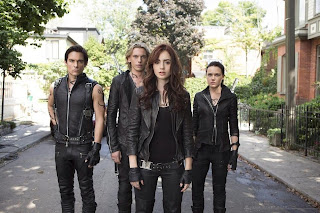 The Mortal Instruments has assembled a fine cast for the beginning of it's series of films (if it does make it past the second film, as only the second film has been announced). It is just a shame that they really have not been given much for them to exhibit their talents. Lily Collins' Clary Fray is very different from the one in the books, who is quite a strong female character. The way she has been written for the film is not that. Collins' does well enough with the role that is given to her and she is likable, but hasn't got enough character to make her relatable. Jamie Campbell Bower is indeed charismatic and very well suited to the role, but it is a role that doesn't have a great deal of emotional range. Collins and Bower do have on screen chemistry, which is a saving grace for the film.

Jonathan Rhys Meyers does not have much screen time and his character isn't written very well, but his performance is still quite chilling and he does evil very well. Lena Headey also doesn't have a great deal of screen time, but does do well with what is given to her.

It is such a shame to see a film with so much potential fall dramatically short of what it could really be. The scariest thing about this supernatural film, is that no matter how unfortunate the film is, you are still interested to see the next one to find out exactly what happens to Clary and Jace.


You may have also seen Lily Collins in....
The Blind Side as Collins

You may have also seen Jamie Campbell Bower in.....
Anonymous as Young Edward De Vere/ Earl of Oxford
Posted by NP1982 at 6:23 AM