Chatting with Captain of the Snapple Command himself, Karl Lentini 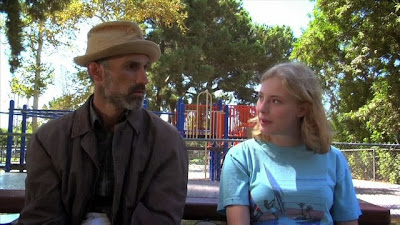 This is the superhuman effort of Karl Lentini in his latest feature film, Cleaver's Destiny which will be premiering at the Laemmle Playhouse in Pasadena, CA this Friday the of 27th September. Lentini's film is about to embark on it's one week run at the Playhouse and audiences will finally get to see this feature film which has been years in the making.

Cleaver's Destiny is the tale of a troubled eighteen year old girl, Amy (Jenny Leona di Gennaro) who wants to find her long lost father who she has just found out was a Gulf War veteran. When she does find her father, Bill (played by Lentini), she finds he is not only homeless, but also has dementia and does no memory of her at all. Amy makes it her duty to expose him to people and places he has been to in order to restore his memory.

When asked where the idea for Cleaver's Destiny came from, Lentini explained that it all started with a short comedy film which he had made around twenty years earlier about the antics of an eccentric homeless man. This film was the beginning of Bill Cleaver, otherwise known as Captain of the Snapple Command, as he spent his days collecting Snapple bottles which people had thrown out.

"Over time I was thinking more and more about this character and maybe he had a daughter who he had lost contact with, and maybe he was in the military" Lentini said. "I decided to make it into the movie and that it should be the daughter looking for him"

In preparation for the role of Bill, Lentini dressed up as though he was homeless himself and went out into the streets of Los Angeles, where he lives and where the film is also set, to get a glimpse into the life of those like Bill. He also said that "just being in L.A. means you get to observe the homeless in a big way".

Cleaver's Destiny was shot over a 14 day period in 2008. As Lentini was the writer, producer, composer, director and actor in the film, he admitted that the biggest challenge he had to deal with was the exhaustion. "The biggest challenge was being mentally, physically and emotionally exhausted because I was putting out so much" he said.

However, he is now able to see the more rewarding side of his hard work. Cleaver's Destiny has received rave reviews leading up to it's premiere on Friday night. Lentini is also quick to praise his leading actress, Jenny Leona di Gennaro, who is not only receiving critical acclaim for her role in the film, but has also since graduated from The Julliard School in New York.

Lentini, who is originally from New York, studied at Boston University's film school and moved to Los Angeles to pursue his career in 1991. It was when he first saw Star Wars when he was a child that inspired him to work in film, a film which is still one of his favourites. He admits that he is not following the rumours circulating about the seventh Star Wars film as he would much rather be surprised and enjoy the film for what it is when it is released.

"I would love to someday make a sci-fi film" Lentini said. "But with a real emphasis of character like in this film".

Cleaver's Destiny will be screening at the Laemmle Playhouse Pasadena, CA from the 27th September-3rd October 2013. Karl Lentini will be participating in Q & A sessions at the 7:50pm screenings on the 27th and 28th of September.  Please see here for more information on times and tickets.

Thankyou to Karl Lentini for his time and having a chat to us about his film and we wish him the very best of luck with Cleaver's Destiny. Thankyou also to Amy Prenner of The Prenner Group and Monica Busby of Quantum Leap Entertainment.
Posted by NP1982 at 1:18 AM