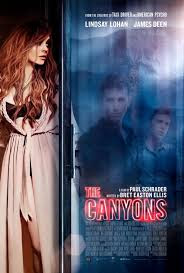 Where do you start when discussing The Canyons?

How about this, The Canyons has the ability to become a cult classic. Being a cult classic in itself isn't bad news. It means your film has staying power because there is something about it which causes people to remember it. That's got to mean that The Canyons must be a good film then, right?

Wrong. To be completely and utterly honest, The Canyons is a terrible film. It's low budget cannot be used as an excuse for it's empty story, ridiculous dialogue and mediocre acting. What makes it resemble some of the films which have been tagged as cult classics is that it is so bad that it is actually hilarious. While it is very unlikely that this is what the filmmakers had in mind when creating this movie, it is at least entertaining and therefore watchable for it's comedic relief.

Christian Reid (James Deen) is a trust fund twenty-something living in Los Angeles and dabbling in the movie business. His girlfriend, Tara (Lindsay Lohan) is secretly having an affair with Ryan (Nolan Gerard Funk), who is Christian's assistant, Gina's (Amanda Brooks) boyfriend. When Christian finds out, he becomes obsessed with making Ryan's life hell. Ryan retaliates and when he does, Christian shows how dangerous he really can be. 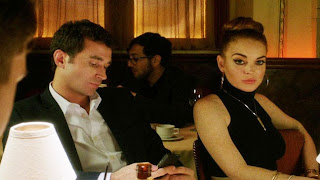 The intention of The Canyons is to present the increasing emptiness of today's society and chooses the Hollywood region of Los Angeles to be the representation of this. The film, directed by Paul Schrader and written by Bret Easton Ellis, wants us to acknowledge how we do not place as much importance on things as what we used to, whether it be material things or relationships and feelings such as happiness. The opening consists of shots of abandoned cinema complexes as a representation of how we are no longer placing importance on the things that we used to. However, what the film is ultimately trying to say is not that easy to unravel. The story itself doesn't make us believe that there is some symbolism going on there and as the story isn't a strong nor original one to begin with, the whole film just feels empty. It feels like you are just watching these people on screen deceive each other with no other reason besides they are just pathetic creatures. While the film is supposed to be symbolising emptiness, it doesn't reach as high as symbolism and just becomes empty itself.

The script is absolutely atrocious. It is such a shame as one would expect author Bret Easton Ellis' transition from writing novels to screenplays a lot more successful. As said before, the story is not particularly interesting in itself and the dialogue is terrible. Some of the lines delivered by the actors are just laughable as they are either just ridiculous and make no sense at all. For how many laughs some of Christian's deliveries receive, Schrader should have just bit the bullet and made The Canyons into a thriller/comedy.

Schrader's direction is also a great disappointment. He even has problems directing Lindsay Lohan pretending to drop a bottle of water. His choice of closing shot is not supposed to be a laughing matter, but is probably one of the most comical of the film. Admittedly, the first scene in which the four main characters are having dinner together is quite well directed and not much can fault that scene, but not every scene is like that scene. There is the matter of not being able to have as many takes as you would with a higher budget film, but Schrader obviously had this all in his head to begin with and was visualising it all wrong.

The cinematography is also not up to standard. Some of the hand held camera work is extremely unstable and adds nothing to the scene. The editing and choices of shots are just a mess and again, do nothing for the film. What's a random shot of a man's pelvic area anyway in the grand scheme of things? The soundtrack accompanying the film is at least interesting and does add to the feeling of the scene and the personality of the characters.

There are no spectacular performances in sight here. As The Canyons is being labelled by many as Lindsay Lohan's comeback film, many eyes are on her, and the ones that aren't are watching how James Deen makes the transition from porn to actual acting. Lohan does try in this film, you can tell she didn't take this project lightly. She does have some very good moments, particularly towards the end of the film, but in those scenes where she is crying and they have opted for the close-up, it problem wasn't a great idea when she can't bring the tears. James Deen isn't terrible, but is more at ease being physical (yes, that does mean exactly what it sounds like) than delivering those awful lines. Nolan Gerard Funk's performance is just weak. Watching him is like watching someone in their first acting class who is just starting to learn how to make the audience believe what they are saying, and we are talking about their first ever experience of reading a script. Amanda Brooks is probably the actor with the most likable character, as she doesn't have a deceptive nature, but doesn't put up with anybody else's.

However, even though all the above may put you off going to a screening if you have the chance. Don't let it. The best way to do it is to grab a couple of friends, make a night of it and be prepared to unintentionally have a great laugh together!