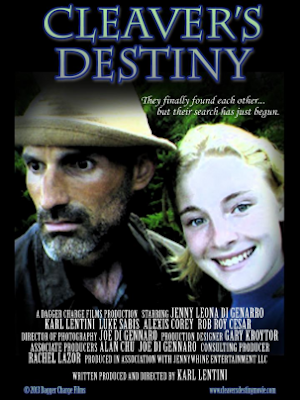 Year: 2013
Running Time: 92 minutes
Director: Karl Lentini
Writer: Karl Lentini
Cast: Jenny Leona di Gennaro, Karl Lentini, Alexis Corey, Rob Roy Cesar, Luke Sabis, Samantha Lester
Cleaver's Destiny will be screening at the Laemmle Playhouse at Pasadena, CA from the 27th of September to the 3rd October 2013. For more information on times and tickets, please see here
Cleaver's Destiny is an incredible piece of work on so many levels.
There is so much to be marvelled at in this beautiful film which is directed, produced, written and stars Karl Lentini. Cleaver's Destiny is the type of film which big budget films could learn from in the areas of character development and emotional depth. However, one of the best things about this film is that it addresses so many community and personal issues without making you feel as if you are being bombarded with information and are struggling to take it all in. It is very clean cut and absolutely delightful.
Troubled teenager, Amy Cleaver (Jenny Leona di Gennaro) has always thought that he father was dead. However, on her eighteenth birthday she receives a box of his belongings from her grandmother and when discovering that he was a soldier in the Gulf War, decides to find his grave. She soon finds out that he does not have a grave and that can only mean that he is still alive. Her search for him leads her to find that he is homeless and suffering from dementia, which means that he doesn't remember Amy. She sets out on a mission to help him remember more about his life and help him remember her.
There are many elements in Cleaver's Destiny that people will be able to relate to. The film gives us a closer look at the homeless and their lives on the street, particularly in Los Angeles where this is extremely widespread. We are given the opportunity to understand more the mentality of many of the people on the street and also the journey they took as to how they came to be that way. It also of course looks at the lives of veterans after they return from their service and how they continue to live their lives. Such is with the examples of Bill Cleaver and Pratt, the war changed their perception on the world and they were unable to carry on with life in the same way they did before. 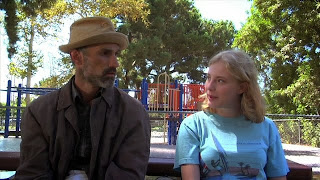 The character development in this film is brilliant. We learn everything we need to know about each of the main character within their first few minutes on screen, especially Amy. We learn not only how troubled she is and how she is headed down a self destructive path by her meal of cereal and alcohol, but also how she is wanting to be loved and taken care of. She is an extremely complex human being who is made easier to understand by a wonderful beginning of a film. Not only is the character development brilliant, but so is the relationship study throughout the film. Cleaver's Destiny looks at the relationships between mother and daughter, father and daughter, friends, lovers and those strangers you meet by chance who play a big part in your life.
It is a superhuman effort by Karl Lentini to direct, produce, write and star in his own film. He has created an incredible film with a wonderfully witty screenplay, and has absolutely no problem in directing himself. It's wonderful how his character changes throughout the film and Lentini has something amazing scenes which are so emotionally powerful. Jenny Leona di Gennaro is the perfect choice for Amy. She really is an amazing talent as she is completely convincing in every scene and makes Amy into a likable character which you connect with and care for. Alexis Corey is also great with her perfect comedic timing as Amy's mother, Norma.
Cleaver's Destiny has something for everyone and is the perfect example of how you can still have so much happening, yet not make your audience feel as though they have to fight to keep up. All you need to do in Cleaver's Destiny is sit back and enjoy Amy and Bill's journey.
8.5/10﻿

Cleaver's Destiny will open at Laemmle Playhouse on the 27th of September. Karl Lentini will be attending both the 7:50pm screenings on the 27th and the 28th and be participating in a Q&A session following them both.
Military discount: $6 for veterans, retired and active military with appropriate ID.
Posted by NP1982 at 6:45 AM