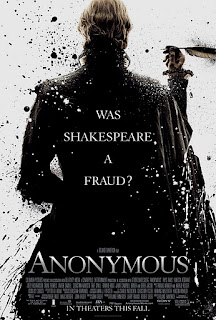 Anonymous
Year: 2011
Director: Roland Emmerich
Cast: Rhys Ifans, Vanessa Redgrave, Joely Richardson, Sebastian Armesto,
Before I begin my review….
So Anonymous isn’t sitting well with those at Stratford-Upon-Avon. I can’t imagine why (sarcasm intended here).
Although I think the whole concept of Anonymous makes for a great story and conspiracy theory, I’m not really convinced. I know it is impossible for me to say with any great confidence as I was not alive in Tudor England (funny that) and therefore do not know any people who could have been involved in the “cover up”. All research I do on the internet on this subject is completely non-conclusive and doesn’t really present anything else that I hadn’t heard in Anonymous.
There is also no real evidence that Queen Elizabeth I gave birth to any illegitimate children let alone as many as they say in the film.  There’s always at least one commoner in history who wants to tell the whole world that they have or are*insert famous person name here* illegitimate child. In Tudor times there was no way to tell whether it was true or not unless the Queen herself came forth and said that it was true. It does sound like a fun idea to make believe, doesn’t it? You may get treated like royalty and may earn a few shillings! Or people may think you are crazy.
Anyway, I am a fan of Shakespeare and of Tudor England so it was all fun and interesting to me either way.
Review
Was Shakespeare a fraud?
It doesn’t really matter when it comes down to it in this case, just as long as the film is entertaining and brings people into the cinemas. The subject matter is certainly interesting in Anonymous and the controversy surrounding it is enough to make people want to come in and find out what all the fuss is about. It is interesting enough, but there seems to be something missing.
In Tudor England under the rule of Queen Elizabeth I (Vanessa Redgrave), the stage is gaining in popularity with the emergence of actor turned play writer, William Shakespeare (Rafe Spall). However, Ben Johnson (Sebastian Armesto) knows the truth…that Will Shakespeare is illiterate and all his plays were written by Edward De Vere, Earl of Oxford (Rhys Ifans). The Earl has to keep his name hidden due to his and his plays personal connection to royalty.
There are some terrific moments in Anonymous and some moments where you wish the film would just hurry up and get on with it.
The opening of the film is an interesting choice by director Roland Emmerich. It does work as an introduction, but there are other more fitting ways the film could have begun that would have been more fitting for the story and time period. Some of the editing is also a bit of a strange choice and the flashback sequences are a bit erratic.
Visually, the whole film is stunning and it is a beautiful period piece. The costumes, especially those of the Queen, are amazing.
The script, written by John Orloff, is tight and very clever, never forgetting that this was taking part nearly 500 years ago and the language needs to always be appropriate of that time. It contains lots of historical fun facts and is a good learning experience for all the audience.
The part of the film that lacks the most is that it does go for about half an hour longer than what it should. It isn’t boring as a result as such, but more just takes a bit longer than what it should to get to the point.
There are some really credible performances in Anonymous, yet no actual feeling of being emotionally connected to any of the characters. Perhaps the only character you feel really attached to and have some sort of feeling to is Edward De Vere, Earl of Oxford  as Rhys Ifans. This role is the best of his career so far and he is truly superb in it.
Mother and daughter team of Vanessa Redgrave and Joely Richardson are wonderful as the young and older Queen Elizabeth.  Richardson brings out both the sweet and fiery side of the younger Elizabeth and Redgrave is completely memorable in her portrayal as the older Elizabeth. It is not often we see Elizabeth at the end of her reign on screen and she is wonderful.
Sebastian Armesto’s performance seems like it is almost supposed to be comical at times, even though this is not the intention. One of his first scenes when he bursts onto the stage in rage of his play being received wrongly, it almost seems like a Monty Python.
Jamie Campbell Bower is wonderful as the young Oxford and continues his good form and rise to fame with this film.
If not a little far-fetched and a little too long, still an interesting and half an entertaining watch.
6.5/10
Posted by NP1982 at 1:48 AM