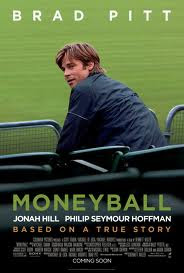 Moneyball
Year: 2011
Director: Bennett Miller
Cast: Brad Pitt, Jonah Hill, Philip Seymour Hoffman, Robyn Wright
Before I begin my review…
Moneyball is a sports movie with a difference. Even though there is plenty of baseball romanticism, it shows that there is more to sport than what happens on the playing field. Probably a good thing we have a film like that as the sports movie where the losing team eventually becomes the winning team and everyone is left feeling happy is becoming very cliché and boring.
You have really got to hand it to Billy Beane for completely changing the way sports teams are run. This isn’t just restricted to baseball, you can see it in American grid iron football and even in rugby codes. Being a team is all about working together and not just having a few stars and back up dancers (if you can think of it that way).
However, Billy Beane and Brad Pitt really look nothing alike. I would’ve though Brad Pitt would have dyed his hair darker for the role at least.
And just for the hell of it, go Red Sox!!
Review
Moneyball gives us the type of sports movie we have been waiting for since the likes of Jerry Maguire.
You cannot have a sports movie without some winning and losing and sports footage, but Moneyball shows what happens behind the scenes to those who sometimes miss out on all the credit.  It is the intelligent sports movie.
Ex baseball player and now General Manager of the Oakland Athletics, Billy Beane (Brad Pitt) is stuck with the tough job of rebuilding the team after their three star players leave at the end of the season. However, he has to do this on a tiny budget compared to all the other teams in the league which means not being able to afford players of the same calibre as the ones who have left. With his new Assistant General Manager, Peter Brand (Jonah Hill) he devises a plan to focus more on runs rather than stars and is ridiculed and scorned by all those around him at the A’s.
The best thing about Moneyball is that it is intelligent. The script by Steve Zaillian and Aaron Sorkin is very well written and covers all bases.
This is director, Bennett Miller’s second feature length film (his first being the critically acclaimed Capote) and he has once again done a great job. The way he has assembled the script against the visuals and combined visuals of the A’s actual games and filmed cinema footage is commendable.
However, because Moneyball does focus so greatly on the script and the story, it is quite slow and many people will not quite appreciate the sequences of pure conversation with not much else happening.
Brad Pitt is fine as Billy Beane, although in some moments he is better than others. In the first half an hour, he isn’t quite convincing in his role. It seems as though he isn’t really acting, just sitting down and talking to his co-stars. His best moments in the film are the moments where he is in a fit of rage. In his defence though, it is not one of the hardest roles of his career and he does fine.
Jonah Hill gives a good performance as the brains behind Beane’s plan and embraces a character different to the ones he normally plays. Philip Seymour Hoffman is satisfactory in his role as the A’s team manager.
A sports film that not only sports fans will enjoy. One completely refreshing thing about Moneyball is that it is one of the only Hollywood films released this year where there isn’t a romance between two people subplot. Something to be rejoiced.
7/10
Posted by NP1982 at 6:54 PM