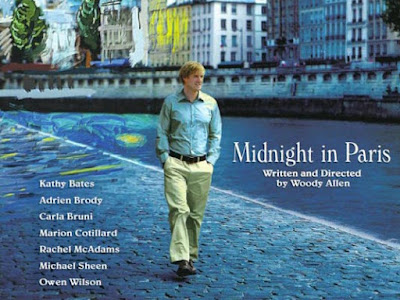 Year: 2011
Director:  Woody Allen
Cast: Owen Wilson, Rachel McAdams, Michael Sheen, Kathy Bates, Marion Cotillard, Carla Bruni, Adrien Brody
Before I begin my review…..
You know, there is a difference between thinking a film is a good film and truly liking it. Of course the two can usually come hand in hand with each other, but you can walk away from a film saying “Yes, it was good”, but it is different to walk away and saying “I really loved that film!”
Being a reviewer, I see many films that I know are great films and because I am a fan of great film, I do like them. Yet that doesn’t mean that I am going to put the film on my list of all-time favourite films.
On my list of favourite films, there are many films which I would consider great film, others which I know perfectly well won’t end up on any “Greatest Films Of All Time” lists…except mine. These are the films which you think are great films, but you have that extra emotional attachment to them because they strike an interest with you or you can relate to them.
Why am I talking about this? Because I loved Midnight In Paris! It is a good film, not one of the best films at the year or a contender for the Academy Awards (but I wouldn’t mind seeing it as one!), but it had a lot of me in it. I love the city of Paris, I loved all the literary and art maestro’s in the film and I love films that take you back to the glory days or yesteryear. Yes, I do want to live in Paris in the 1920’s. And if I do, I want to look and dress like Marion Cotillard.
Here is my review…
Review
It’s been a long time since Woody Allen has made a critically acclaimed film and you may have heard that Midnight In Paris is his best film in decades. You may like to know that this is true.
Woody Allen is completely back to form in Midnight In Paris. He has discharged the trends in the films he has made in the past 10 years which were still selling cinema tickets, but clearly not working for him. Midnight In Paris is subtle but charming and very sweet. It is almost like a modern day fairy tale with the all-important moral of the story at the end. New territory for Allen, but it works.
Hollywood screen writer, Gil (Owen Wilson) and his fiance, Inez (Rachel McAdams) are on a trip to Paris. Gil, who is struggling to write his first novel, falls in love with the city, while Inez is quite the opposite and doesn’t romanticize Paris the way her fiancé does, except if it includes her friends and in particular old flame, Paul (Michael Sheen). Gil decides to take a night walk back to their hotel while Inez goes out dancing, and he finds that Paris comes alive at midnight.
It is completely obvious within the first five minutes that Allen is in love with Paris the same way he is with New York. His montage of Parisian landmarks and Parisian life is a wonderful way to set the scene and make the audience fall in love with the city.  His cinematography of the city is loving and beautiful.
People who are not fans of Allen’s past work will still enjoy Midnight In Paris, as it is completely different from the majority of his films. It hasn’t got the same “weird” vibe as most people describe his films as having. It is a load of fun, and helps if you know a bit about great writers and artists of the early twentieth century to make it all the more fun. Some people may find it all just a bit silly and the concept completely ludicrous, but there is no doubt it is entertaining.
The script is very clever for a subject which is actually quite simple when it comes down to it. The concept of going back in time is not a new one, but it seems completely fresh in this film and Allen does a wonderful job of recreating both turn of the century Paris and 1920’s Paris.
What the best thing about Owen Wilson’s role in this film as opposed to his past roles, is that he comes across a lot more natural than usual. He is often criticised for giving forced roles where she seems like he is trying too hard to be funny, but here he is just completely at ease. He gives one of his best performances in years.
Wilson and Rachel McAdams are completely mismatched on screen, which means that they have achieved their objective. Unfortunately, she is not quite as believable as the hard to handle fiancé. She seems like she still really wants to be nice so her performance does feel forced.
Alison Pill and Tom Hiddleston are a real treat as Zelda and F. Scott Fitzgerald and Adrien Brody is hilarious as Salvador Dali. Marion Cotillard is charming as usual and completely at home in her city of Paris.
A wonderful treat, especially for those who love Paris.
8.5/10