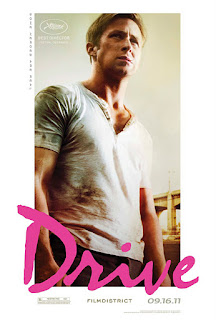 Drive
Year: 2011
Director: Nicholas Winding Refn
Cast: Ryan Gosling, Carey Mulligan, Bryan Cranston, Christina Hendricks, Oscar Isaac
Before I begin my review…
I have a brilliant idea.
We all know how this year is the year of the Rabbit in Chinese astrology and next year is the year of the Dragon. I’m not necessarily into astrology for reasons which are my own and I’m not going to start a debate about it here, but I propose each year to be a year of a particular movie star. This “movie star” year is selected according the achievements of a particular movie star of that year. Not like the Oscars, as the Oscars are based on one performance. This is based on a year of work.
Only problem is that it is usually in the second half of the year that you notice that you have pretty much seen this actor in almost everything that year. You know what I mean. 2004 was the Year of Jude Law. His film roster that year included I Heart Huckabees, Sky Captain and The World Of Tomorrow, Closer, Alfie and The Aviator. That’s an impressive year. Unfortunately Movie Critical wasn’t in existence then, so seven years later we will declare 2004 the Year of Jude Law! Well done Jude!
Back to the present, I proclaim 2011 to be the Year of Ryan Gosling. He has had a big year. He has starred in Crazy Stupid Love, Drive and The Ides Of March, as well as short Quiet Ryan. It seems as if we have seen Gosling everywhere the past few months. He was also nominated for a Golden Globe at the beginning of 2011 for Blue Valentine.
What do we love best about Gosling? Not the so called “photo-shopped” chest which Emma Stone refers to in Crazy Stupid Love, but that he never gives anything less than 100% in every single one of his performances. He’s a good looking boy, but don’t let the looks fool you into thinking that that’s all he relies on in his movies. Just watch Drive.
Review
Drive is an absolute sackful of surprises.
For the first half of the film, you think it is one type of the film. However at the halfway point it completely switches pace, rhythm and becomes a totally different film entirely. It may not be the change some are happily expecting, but it does allow intrigue and keeps up interest in the film.
Ryan Gosling’s Driver is a Hollywood stuntman by day and is a hired getaway driver for criminals at night. He lives a solitary life and avoids emotion of any kind. That is, until he meets his neighbour, Irene (Carey Mulligan) and her son, Benicio (Kaden Leos). He finds himself becoming drawn to both of them, even when Irene’s husband, Standard (Oscar Isaacs) is released from prison which leads to inevitable complications with his emotions and profession.
Drive is very well directed by Nicholas Winding Refn. The cinematography is truly brilliant and he makes the most of every scene no matter how non-aesthetically pleasing the contents of that scene may be. Refn is a fan of the mirror reflection shot and this is used a great deal throughout the film.
There are aspects of Drive which seem extremely 1980’s, such as the pink handwriting at the beginning of the film and the somewhat retro music played throughout.
The first half of the film is quite slow, but is so in order to create character for the Driver and also for Irene and her family. However, once Standard and Driver team up the film does a complete 360 degree turn and changes entirely. It becomes fast paced and action packed and really quite violent. There are fragments of the infamous Bonnie and Clyde scene with the addition of a great deal more blood.
The car chases in the film are particularly memorable and prompt you to reach for your seatbelt like you are on a ride and afraid of falling out.
Ryan Gosling does a good job in his role, but you really wish you knew more about his character. However, it is interesting that for the lack of character development, you feel an instant relationship with the character from the first few scenes. His acting is really quite good for a character who doesn’t say much or show much emotion. You are able to see the subtle flicker of emotion in his eyes during the relevant scenes. Yet, you do wish at times that he might say a bit more.
Carey Mulligan never puts in a bad performance, but it doesn’t seem like the best role for her. She is sweet, but not a strong role really. Oscar Isaacs is believable and actually quite likable, which is a surprise for a criminal. Christina Hendricks doesn’t have a big role, but she doesn’t do badly. It is a big change from her Mad Men persona.
Not a typical “rev-head” movie so does draw in a wider audience. Not for those who cannot stand blood.
7/10
Posted by NP1982 at 11:34 PM