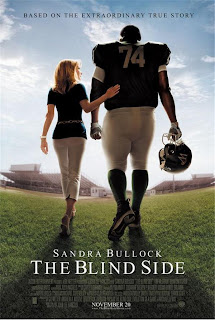 In My Own Words
Big confession, I wasn’t a huge fan of Sandra Bullock until about 6:30pm today. Actually, I wasn’t a fan of hers at all. I found her roles too light and wishy-washy, if that is an accurate description of ones acting performances. But as of 8:40pm, I like her a lot more. I don’t know if I am completely convinced that she gives the performance of the year, but it is definitely the performance of her career. If there was an award called “Best Choice Of Role To Redefine Yourself As An Actor”, I do believe she should win that. I fear that she may win the Oscar for the reason that it is her best performance and members of the academy may get the two mixed up. I’m not saying that her performance in “The Blind Side” isn’t a great performance, because it is, but I don’t believe that it is the best performance by a female actor in 2009. I’m not entirely sure that “The Blind Side” should have been one of the 10 films nominated for Best Picture either, and again, not because it isn’t a good film, but it doesn’t quite compare to pictures such as “Avatar”, “The Hurt Locker” or even “Up”.

Yet....”The Blind Side” is a sweet and simple film, that made me want to go home and watch a football game. Too bad the rugby league season here doesn’t start until next weekend. It has been awhile since a good sports film has been released and it’s good to finally see one again. Definately one for the football fans.

These are my words and here is my review.

Review
“The Blind Side” is definitely the best sports film of the past few years. Although it can be quite simplistic at times, it is still enjoyable and Sandra Bullock does indeed give the performance of her career. For many reasons, it is almost “The Sandra Bullock Show”, but by no means is that a bad thing. The film is based on the true life story of footballer player Michael Oher (Quinton Aaron), who lived an under-privileged childhood as a result of a drug dependant mother and having to move from foster home to foster home. When he is lost for a place to live, he is taken in by the Tuohy family and is treated as one of their own. Michael shows talent as a footballer because of his huge size and he achieves more than he ever thought possible.

Even though “The Blind Side” deals with hard-hitting issues such as racism, drug abuse and poverty, it is quite light considering. The script is very simply written and at the beginning, is quite weak. Luckily, it gathers momentum and strengthens as the film goes on. Of course, we do feel sorry for Michael with all his turmoils, but it is known from the very beginning that “The Blind Side” is definitely a feel good movie so he will therefore break through. Being a fell good movie, it is predictable. The ending isn’t as victorious as it could be, but such is the problem with biopics, you can’t stray too far from the truth if you want to remain true to the story. However, even though this is a downfall, it is also an advantage for the movie. By making the movie softer than it could be, it opens up a bigger audience for the film. The audience doesn’t need to have a strong stomach or even be much of a sports fan to enjoy the movie. Of course, sports fans will love the movie, but the film is not just for sports fans by any means.

Sandra Bullock is, as everyone must know by now, the star of the film. She gives the best performance of her career in this film and it is unlike any other work she has ever done. Although she has tried her hand at dramatic films before, this is the role that best suits her acting capabilities and is definitely her most memorable. She is witty, driven and believable as Michael’s adopted mother, Leigh Anne. Quinton Aaron does well in his portrayal of Michael Oher. His character is quiet, yet shows much emotion just by using his facial expressions. The performance is sure to please the real Michael Oher by all means. Kathy Bates is witty and delightful as Michael’s tutor, Miss Sue and Tim McGraw is likeable, but at times boring, as Sean Tuohy.

“The Blind Side” will not win Best Picture at the Oscars next week, but it is definitely a feel good movie that will delight audiences. Sports fans will really enjoy all the football sequences, but non-sports fans will enjoy the acting and optimistic view of the movie that you can make something of yourself no matter where you come from. It is definitely worth seeing the film for a piece of light, but good viewing and to see Sandra Bullock give the performance of her career thus far.
7/10