One In The Gun 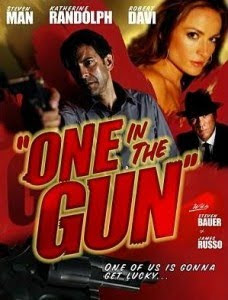 In My Own Words
“One In The Gun” is the second film of the 2010 Soho International Film Festival that I am reviewing. This feature premiered on the closing night in February and ended the festival with a bang. The film is high paced and full of action, with never ending twists and continuous surprises, a perfect end to a festival. Such an end to an event leaves an audience wanting more, ensuring that the 2011 Soho International Film Festival will be bigger and better.

Director Rolfe Kanefsky has tried his hand at many genre’s, horror being what he is best known for. In this film he tries his hand at “One In The Gun”, a film which is hard to fix with a particular genre. It has the aspects which could classify it as film noir, such as a femme fatale and.....well, I can’t say much else besides that as I would give away part of the film! However, the film has a real David Lynch feel about it, reminding me most of a cross between “Mulholland Drive” and “Lost Highway”. It is extremely surrealistic , just like many of Lynch’s films, but Kanefsky has his own style and knows how to make it work for him.

Review
“One In The Gun” is an extremely enjoyable, action packed roller-coaster. It is one of those rare films where there is not a single moment where there is not something of intrigue and captivation happening, a sign of a great story, script and direction. True to the surrealist nature of the film, there are times in the film that are plagued with a feeling of confusion, but the confusion is an intended part of the film. It is not there as a result of something being ill-explained, but rather to increase the audience’s inquisitiveness of what Mickey, played by Steven Man, is really going through. When Mickey meets Katrina (Katherine Randolph) in a supermarket car park, he is thrown into a seductive, and dangerous chain of events. In becoming the house painter for Katrina and her husband, he falls under her spell and falls victim to her charms. However, things are never what they seem.

Although the film can seem like it starts off weak, it is realised that it is the perfect the way it is. “One In The Gun” gains momentum continuously throughout the film so it is only fitting that it starts off at its weakest as it is revealed later as to why Kanefsky made things the way they are. It can be argued that the acting is weak at the beginning of the film, but it is supposed to be weak as the actors are playing characters who are acting themselves. It is a great film when a film is one that makes you think you know the ending, but the ending is continuously changing so the film is indeed tricking the audience. When you think it is predictable, it changes direction. “One In The Gun” changes direction, but does not do so in a messy way. There is no stone that is left unturned and everything ads up in the end. It feels as though the film really is a roller coaster, it goes around in a loop, but shocks its passengers by making jolted, unexpected turns, leaving the passengers anxious as they do not know what to expect. When the roller coaster of “One In The Gun”, the passengers turn to one another, looking for each others reactions, but they all agree that that was a great and surprising ride.

Steven Man does well as Mickey and carries a convincing performance showing the unease of the character. At times, the character can seem like the evil one, yet there is also pity for him. Katherine Randolph is the perfect femme fatale, both physically and in her acting ability. She is sexy and sultry, as well as scheming and can be plain wicked at times. The character of Heather, played by Dana Fares, is definitely noteworthy. She is extremely bizarre and definitely unsettling. Her movements and terrifying laughter and voice are the things nightmares are made of. Just the sight and sound of her makes the audience squirm. Heather is the horror of the film.

“One In The Gun” is a film where nothing is ever as it seems. Even when you think you have it figured out, it is unlikely that you do. It is a film that must be watched until the end and is unlike your everyday run of the mill thriller. Although it does contain fragments of other movies that you may have seen, it is presented originally due to its surrealism and is entrancing.
8/10