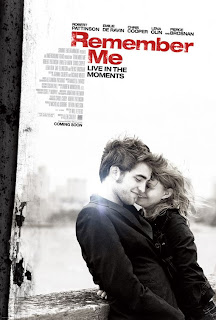 Remember Me
Year: 2010
Director: Allen Coulter
Cast: Robert Pattison, Emilie De Ravin, Pierce Brosnan, Chris Cooper
In My Own Words
Never underestimate the drawing power of a teenage heartthrob. They not only draw in the adolescent crowd, but filmgoers of all ages who are curious to know whether these superstars can in fact act outside their comfort zone. “Harry Potter”, “High School Musical” and “Twilight” are perhaps the three biggest phenomenon’s of recent times and have made superstars out of young actors. People follow these young superstars through the tabloids and also their other projects, eager to see who can survive outside their usual playing grounds. The stars of “Twilight” definitely have their work cut out for them. Teenagers flock to their movies away from the Twilight saga in droves, and as a result Robert Pattison, Kristen Stewart, Taylor Lautner, Anna Kendrick and Dakota Fanning have their work cut out for them. Fanning established herself as an actress before she appeared in “New Moon”, yet “Twilight” has provided her with a whole new fan base, while Kendrick gave an amazing performance in the acclaimed “Up In The Air”, earning her an Oscar nomination and proving she is far more than just Jessica in “Twilight”. However, what about Pattison, Stewart and Lautner? What lies beyond Edward, Bella and Jacob?

Review
“Remember Me” is the Robert Pattison show. There are many other actors who could have played the lead in this film and may have even done it better than Pattison, but the film wouldn’t have done quite as well as it did financially had Pattison not been part of it. Pattison plays Tyler Hawkins, who is mourning the death of his older brother, Michael who committed suicide five years before. Tyler develops a rebellious nature and after having a run in with a policeman, lands himself in hot water. Tyler’s room mate and partner in crime, Aidan (Tate Ellington)discovers that Sgt. Craig (Chris Cooper) has a daughter who goes to school with them and dares Tyler to ask her out. Tyler and Ally (Emilie De Ravin), who is also still recovering from the murder of her mother, embark on a romantic venture which helps both of them recover from their losses.

The big fault of “Remember Me” is that it is nowhere near as emotionally charged as what it should be. There is now overpowering feelings of love between Tyler and Ally, as there should be in a romance film such as this. There is more of an emotion connection between the audience and the “smaller” characters such as Tyler’s father (Pierce Brosnan) and his sister, Caroline (Ruby Jerins), and Sgt. Craig, than with the lead characters. However, the film is supposed to be focused on Tyler and Ally, although the audience definitely wishes that director Allen Coulter would focus more on the families and their dynamics and ways of dealing with their grief. The way in which the film is filmed, one would suspect that Coulter was also trying to film “Remember Me” in an indie style, which greatly fails. It lacks the purity and raw emotion of an indie film.

As for Robert Pattison, it isn’t a bad performance, but certainly not a great performance. Pattinson can act, but he is overshadowed by other performers in this film. It almost feels as though he is struggling to break through with his performance and falls short of the performance he should have given. There does definitely seem to be a lack of chemistry between him and co-star, Emilie De Ravin. There is no belief in the two being in love. Watching the two of them on screen makes the audience member, particularly the “Twilight” fan wish, Kristen Stewart would take De Ravin’s place. De Ravin herself does not deliver a particularly memorable performance and does not have a very hard role to fulfil. However, the saving grace of this film are the performances by the supporting actors. Both Brosnan and Academy Award winner Cooper give superb performances as the two fathers. They leave both Pattinson and De Ravin for dead. Young Ruby Jerins is also superb in her debut role. She is believable as the talented, bullied younger sister and surely has great things in store for her. Thanks to these three performers, the film does have a reason beyond Pattinson to be viewed.

“Remember Me” could have been a lot more than what it is. It is not the best role for Pattinson and he is truly much better as Edward Cullen. If it were not for the performances of Brosnan, Cooper and Jerins, “Remember Me” would not be remembered at all.
4/10