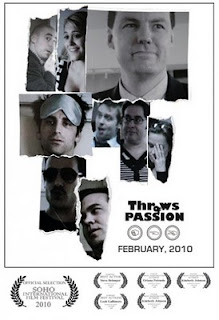 In My Own Words
“Throws Of Passion” is the third film I have reviewed that premiered at the Soho International Film Festival and completely different from the other two films which I have reviewed thus far. While both “A Kiss Of Chaos” and “One In The Gun” were serious and quite intense, “Throws Of Passion” is a comedy. It is not just a comedy, it is in the style of a mockumentary. A mockumentary about a rock scissors paper tournament....that should arise much interest in the film by itself! Rock scissors paper is traditionally a way of deciding those decisions between two people that really aren’t that important (I haven’t actually heard of any decisions in the political world being made by rock scissors paper, but correct me if I am wrong!), so it is obvious that the movie itself will be something light and comedic.

The mockumentary style of film is one that I am particularly interested in. I really like the creativity involved in making such a film. I enjoy documentaries as well as they are really educational, but mockumentaries are entertaining, and you feel like you are learning something as well. However, what you are learning in a mockumentary is rarely factual, but that is the talent and creativity combined of the directors to make you believe that you are actually learning something real. The talent of Todd M. Jones shows this as well in “Throws Of Passion”. Believe it or not, there is actually a Rock Scissors Paper World Championship for those who did not know, as I didn’t before I saw this film and did my research.

Review
“Throws Of Passion” is the comedy film that everyone who attended the 2010 Soho International Film Festival is talking about, and with good reason. It is an extremely funny little mockumentary, which is great fun and completely enjoyable. The film is pieced together from found footage by the failed Cable Sports and Life Network of the coverage of a Rock Scissors Paper tournament. There is a stressed producer, Cuban competitor who no one believes in Cuban, the drunken, out of work presenter and many more who are all involved in the tournament and allow for mayhem amongst all the passion.

According to director, Todd M. Jones, “Throws Of Passion” cost only $1000 to make. Well, what a superb feature for such a small investment! The script is extremely witty and original, not to mention extremely funny. It is never easy to make a film funny, but writers Jones and Jeremy Linden (whom also plays Jeremiah) succeed in making a film that will make everyone giggle. Jones has taken a subject which people would find amusing and made it even more so by throwing some intriguing and colourful characters. As one would expect from a film such as this, the cinematography or visual effects are nothing to write home about, but that is definitely excusable considering the budget. It is the script and the characters which are the focal point of the movie and they are the aspects to be celebrated.

The character development is brilliant in this film. The way in which the film is edited shows all the important points of each of the characters very early on in the film. The audience connects with the characters straight away. There is no character in the film that doesn’t bring a smile to your face, they are all hilarious in different ways. All the characters are perfectly cast in their roles, and, again, Jones does a fantastic job in directing them all.

“Throws Of Passion” is a great film that is funny in so many ways. It is a very clever comedy and certainly a credit to its makers.
7.5/10