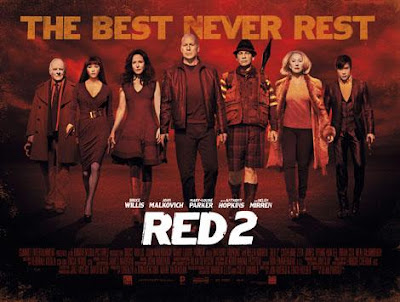 Red 2 opens in Australian cinemas on August 29 and is distributed by Hopscotch Films. Now showing in the USA and UK.

While Red 2 tries to promise a great film experience by tempting you with an amazingly ensembled cast, the film is rarely better than plain bland.

The last 25 minutes of the film are perhaps the best, but it takes a lot of patience to get to this point and not have given up on the film. However, the sequel to 2010's Red is saved by thoroughly entertaining performances by Helen Mirren, John Malkovich and Anthony Hopkins and some pretty exciting action sequences....no matter how unlikely and unrealistic those sequences may be.

Frank Moses (Bruce Willis) is back with his girlfriend, Sarah (Mary-Louise Parker) and once partner in crime and best friend, Marvin Boggs (John Malkovich). Frank and Marvin have been linked incorrectly to a secret operation called Nightshade and are on the run from the authorities as a result. As well as having the authorities on their tails, Victoria (Helen Mirren) has been hired to kill Frank, as has Han (Byung-hun Lee). Together they try to find out exactly what is this top secret operation is that they have been linked to and when they finally find Nightshade creator, Dr Edward Bailey (Anthony Hopkins), everyone realises that there is more than meets the eye to Nightshade. 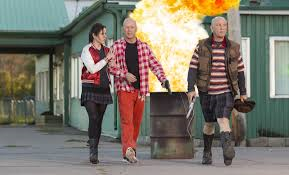 Although it has it's entertaining moments thanks largely to it's wonderful cast, Red 2 is quite lack lustre and borders on the ridiculous on more than one occasion. It is in the first 20 minutes when watching Bruce Willis' Frank take on 15 armed men and come out victorious that you can't help but scoff at how unlikely this seems. Of course in the majority of action films there is usually the presence of less than realistic action sequences, but here in Red 2 we just have no belief that Frank Moses is all he claims to be even though he has so many near death moments throughout the film that he lives through.

Although the script can be just as ridiculous at times. Some of the dialogue (especially that said by Mary-Louise Parker) can be particularly silly and annoying. The story itself has some good moments, such as the uncovering of the Nightshade mystery. Yet it also has it's bad and unnecessary moments, such as the inclusion of the side story of Frank and Katya (Catherine Zeta-Jones) and inclusion of the character of Katya at all. The ending of the film doesn't gather any suspense at all with a conclusion as predictable as the end of day.

On the positive side of things, there are some very entertaining moments in Red 2. Perhaps the best scene in the film is when Victoria and Han are in the car together and the shoot out that takes place. Visually, it was an interesting decision Dean Parisot made to link scenes together by having an outline of the last character seen on screen, and then a red screen leading to a shot of the location for the next scene with the name of the city included. It doesn't really add anything to the film, but there is no real reason to dislike it. It is just an interesting inclusion which makes it a bit more like the traditional comic book to film adaptation.

While there are some ordinary performances by some actors in Red 2, there are some other very entertaining performances. Bruce Willis. who is the main character of the film, seems to be playing the same role he has played in countless films before. His performance doesn't contain any points for discussion, other than it was just mediocre and flat. Mary-Louise Parker plays a character who is just plain irritating, far more irritating than in the first film. Her naivety for the situations she finds herself in is more stupid than endearing. She is not a particularly strong nor inspiring female figure. 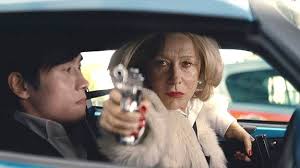 Helen Mirren is the best part of the film with her brilliant delivery of her colourful dialogue. She is an amazing female action star and is cooler than many in the younger generation of butt-kicking females in action at the moment. Those who are followers of Mirren's career will have a good giggle at her scene in the asylum where she mimics a character she has played in the past.

Catherine Zeta-Jones' character is not overly useful in the grand scheme of things and her inclusion really isn't necessary. It isn't a particularly interesting performance by her, but it would be hard to give a great performance of a character who really isn't that great. Anthony Hopkins gives a very good performance as Dr Edward Bailey and shows that he can just as likable as he can subtly terrifying. John Malkovich provides great comic relief to the film with some cracking lines and very funny antics.

Red 2 is just a little too mediocre to make it a successful sequel. As a stand alone film, it not a success by any means. However, the presence of Helen Mirren, Anthony Hopkins and John Malkovich make the film bearable enough.


You may have also seen Bruce Willis in....
Looper as Joe

You may have also seen Helen Mirren in....
The Last Station as Countess Sofya
Hitchcock as Alma Reville

You may have also seen Anthony Hopkins in....
Hitchcock as Alfred Hitchcock
Posted by NP1982 at 6:26 AM