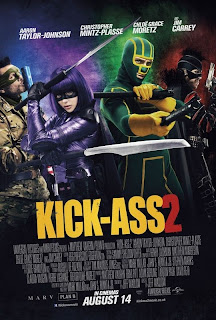 Kick Ass 2 opens in Australian cinemas on the 22nd of August 2013 and is now showing in the USA and UK.

As you would expect it to be, Kick-Ass 2 is just pushing the limits of what the original was. Kick-Ass was the stuff cult classics are made of. It was not a usual film of the superhero genre by a long stretch and shocked the masses of people who thought it was appropriate to take their children to see the film. So Kick-Ass 2 tries to push the boundaries even more by making it more violent, cruder and throwing in more wannabe superheroes.

While Dave (Aaron Taylor-Johnson) is taking a break from being his superhero alter-ego, Kick-Ass, there is a whole new league of new superheroes on the street, all ordinary people wanting to make a difference. Dave decides that he wants to give it another go and calls on Mindy Macready, AKA Hit Girl (Chloe Grace Moretz) to be his partner and help him out. Mindy has her own problems at hand with trying to deal with losing her father and also the typical teenage woes that come along with starting high school. While Mindy is AWOL from the superhero world, Dave teams up with a new team of superheroes led by Colonel Stars and Stripes (Jim Carrey). In the meantime, Dave's arch nemesis, Chris D'Amico (Christopher Mintz-Plasse) is building a team of super-villains all for the purpose of bringing down Kick-Ass. 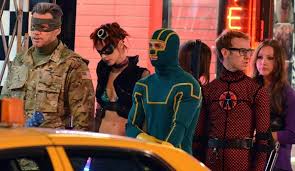 Kick-Ass 2 is just overly silly. It isn't bad to the point where you should just get up and walk out of the cinema, but it is pretty much just an unnecessary sequel. Kick-Ass worked not only because of it's shock factor, but also because it was so unlike your typical superhero genre film. While Kick-Ass 2 is not entirely a regular type of superhero film, it does start to move towards being one with how many clichés are thrown into the mix. Director and writer, Jeff Wadlow wants to say in as many ways as possible that ordinary people can do super things and that we all can be superheroes is we believe we can be. The presence of such clichés and constant reminder of them throughout the film just take the Kick-Ass franchise in genre film territory.

There is still an element of fun to this film, regardless of how ridiculous and silly it can be at times. The fighting scenes and the defining personalities of each of the characters do make the film bearable. All of the characters in the film are enjoyable to watch and they all have a great deal of development to let the audience understand who they are. However, for the main characters of Dave/ Kick-Ass, Mindy/ Hit Girl and Chris/ The Mother-F**ker (yes, that is his name in the film), their defining character moments still belong in the first film so if you haven't seen the original, you may struggle to connect with them.

While Kick-Ass was notorious for it's shock tactics throughout the film, the sequel tries to do the same, but really just takes it a little too far. While this film is violent just like the first film and therefore not as much of a shock, it is it's crude humour takes the cake as being the factor that takes it just a little too far. The lunch room scene with Mindy and the mean girls is just too much no matter what way you look at it. Everything to do with Mindy and the other girls at school is just very overdone and also just ridiculous to the point that it is just cringe-worthy. Yet, it is definitely the lunch room scene that is the most ridiculous and disgusting of the film. 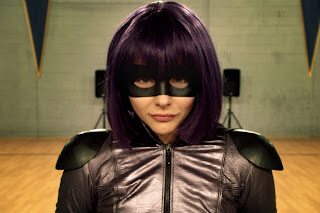 Regardless of the ridiculous and over blown nature of the film, Aaron Taylor-Johnson and Chloe Grace Moretz still do well. They have wonderful onscreen chemistry and make the mot of the roles which are handed to them. They are both fine actors, and it is a credit to the two of them that when they are in such a film as this, it is still evident that the two of them have incredible talent. Jim Carrey has a much smaller role than is suspected. He does well enough in the role which he has, but it isn't quite as comical as you would want it to be.

Kick-Ass 2 isn't a complete loss, but still reinforces the fact that Kick-Ass really didn't need a sequel and nothing has really been achieved (besides the fact that Aaron Taylor-Johnson and Chloe Grace Moretz can act well in anything) by having one.


You may have also seen Aaron Taylor-Johnson in......
Kick-Ass as Dave/Kick-Ass
Nowhere Boy as John Lennon

You may have also seen Chloe Grace Moretz in......
Kick-Ass as Mindy/Hit Girl
Hugo as Isabelle