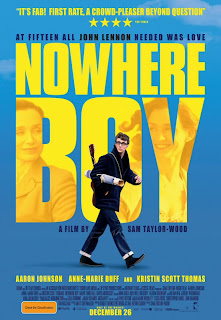 In My Own Words
This movie is an absolute treat for all the John Lennon and Beatles fans out there. However, be aware that this is not a film about The Beatles. It is about the teenage years of John Lennon and the relationship between him, his mother and his auntie. The words “The Beatles” are not even mumbled through out the whole movie, although the movie does feature Paul McCartney and George Harrison. However, you will not need to know much about John Lennon or The Beatles in order to be a fan of this movie. It is a good movie in its own right, no matter whether it has a worldwide star as its main character or not.

I listened to all my Beatles songs on my iPod this morning to get ready for this movie which I have been so looking forward to seeing. I was not disappointed with the film at all. I was extremely happy to find a music biopic that didn’t fit the norm, not that I don’t enjoy watching music biopics. I was just happy to see one that didn’t focus on the fame and the music industry, but rather the person and who they are and where they come from. Most biopics do show this, but not in as great detail as “Nowhere Boy” does.

You have to be inspired and smirk when Lennon’s headmaster says to him “You are going nowhere, boy”. I really hope that happened and is not just an idea of the script writer, because that just shows everyone not to listen to what others tell you, because...you know, John Lennon didn’t go far at all.

Review
John Lennon needs no introduction. He is known worldwide as one of the most influential singers and songwriters ever to grace this Earth. “Nowhere Boy” gives us a glimpse of where this amazing man came from and who and what made him who he became and does so in an interesting and enjoyable way. Young John Lennon (Aaron Johnson) lives with his highly strung and strict Aunt Mimi (Kristin Scott Thomas), who he believes shows no love towards him. After the death of his Uncle George, John seeks out his free-spirited mother (Anne-Marie Duff). They reform a close bond, much to his aunt’s dismay and her interest in rock and roll music encourages John to form a rock band with his friends. However, the film is not about The Beatles, but primarily about the relationships with these two women in his life.

“Nowhere Boy” is a lovely film that will delight both fans and non-fans of The Beatles and Mr Lennon. This film that premiered at the end of the 2009 London Film Festival is an excellent debut film for director Sam Taylor Wood. It perfectly depicts Liverpool in the 1950’s and the script is well written. The film is particularly character orientated, in that there is perfect character development and the audience feels that they know and identify with each of the main characters. The musical score is also perfect for the movie, as one could expect. The music creates an exciting atmosphere at the beginning of the film and creates the right mood for each scene throughout the movie.

The acting is almost entirely perfectly cast and directed. Aaron Johnson is superb as the young Lennon. He captures the rebellious nature of the character as well as the fragility and need for love the character experiences. He also captures the quirky nature of Lennon both in character and physically. He is a pleasure to watch on screen. Kristin Scott Thomas is, as always, astounding and perfectly cast as Mimi. She is subtle at the right times and intense at the appropriate times. Anne-Marie Duff is perhaps the only actor that is less than perfect in her role. As Lennon’s eccentric mother, she is a tad over-exaggerated and almost annoying. Her relationship with her son in the film can sometimes seem inappropriate, which is more a result of the way she is directed than her acting as per say. Even so, she can be too strong at times, and too light at others. Thomas Brodie Sangster, of “Love, Actually” fame, is a stand-out as the young Paul McCartney. In reality, it was often said that Lennon and McCartney were like brothers as a result of certain circumstances in their life, and this relationship is shown on film and is particularly tear-jerking at times.

“Nowhere Boy” is enjoyable from start to finish. It is a roller-coaster of emotions and one of the better biopics of the 12 months. The acting is particularly superb and the characters are well crafted for the screen. It is a fitting tribute to John Lennon.
8/10