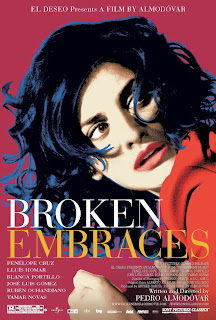 In My Own Words
The first foreign film review for Movie Critical! I am a big foreign film fan, but I find I never see enough of them. A lot of people do not like foreign movies because they do no like the idea of having to read subtitles while watching a film, but I normally find that you almost forget that you are reading subtitles rather than not hearing those words come out of the characters mouths half way through the film. I watch a few of them on DVD, but it is always a challenge watching them at the cinema as not many cinemas around here show foreign films. “Los abrazos rotos”, which is also known by its English title “Broken Embraces” was one film that I wanted to make an effort for. The effort was made easier when one of my friends, who is Spanish, was also wanting to see it and I also won a double pass!

Before I had seen “Broken Embraces”, I had seen only two of celebrated Spanish director, Pedro Almodovar’s films. These films were “All About My Mother” and “Volver”, the latter of which I am a big fan of. He definitely is a great director, although he can be a bit full on at times. I have not seen “Bad Education”, but I have been told that that is an extremely intense film. I found “All About My Mother” quite confronting at times, but “Volver” not as much. “Broken Embraces” wasn’t as full on as what I expected it to be, although you wouldn’t expect that from the opening scene of the movie which just so happens to be a sex scene.

I did enjoy the film as it dealt a fair bit with making and directing films, and it does have some amazing acting, but there are faults in it that make it not as much of a masterpiece as it could be.

Review
There is no denying the power and beauty of the pairing of director Pedro Almodovar and actress Penelope Cruz. It has proved to be a winning combination in the past and continues be so in “Broken Embraces”. Although there are some moments in the movie that can be criticised, the acting and cinematography save the film from being a failure. Mateo Blanco (Lluis Homar), who also goes by the pseudonym of Harry Caine, is a film maker who has been left blind after a car accident. After a visit from someone from his past, Mateo tells his producers don, Diego (Tamar Novas) about the filming of his last film before he lost his sight and about Lena (Penelope Cruz), the married star of the film whom Mateo fell hopelessly in love with. Through this period he starts to call himself Harry Caine and when he loses his sight, proclaims that Mateo is dead and won’t answer to anything but Harry.

“Broken Embraces” is indeed captivating. It is interesting and the cinematography is wonderful. The camera shots which Almodovar uses to capture the actors emotions and make an ordinary shot into an extraordinary shot. As is seen in his earlier films, Almodovar is a great fan of using colour in his films and this was also evident in this film, where even morbid scenes become visually beautiful scenes. However, the film does seem to drag a tad towards the second half of the film. It feels as if not much is happening, and it is taking too long to show not much. It is somewhat anti-climatic and although there is conflict, it conflict scenes in the film are dull and strung out.

The absolute shining star of the film is Penelope Cruz. She is gorgeous and stunning and gives a fine performance. Although the film is told by Mateo and is ultimately supposed to be about him and his life, Cruz is in the majority of the film and is on screen more than Lluis Homar. However, the audience does not mind this, as she is definitely an intriguing character and the camera loves her. Almodovor definitely makes the most of her beauty in his choice of camera shots and angles. Homar does give a good performance, but it feels as though the script did not give him much to work with. Blance Portillo, who plays Mateo’s producer, gives a wonderful performance filled with emotion, but her best work isn’t shown until the end of the film.

“Broken Embraces” is very clever and a beautiful film to watch, although it does have its bad points that non-fans of Almodovor will not be able to appreciate. However, it is one of the best foreign films released in the past year and if you are going to watch only one foreign film in this past year, it should be this one.