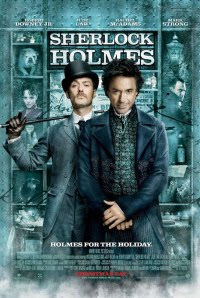 In My Own Words
Everyone knows the basics of “Sherlock Holmes”. He is a British detective who has an offsider named Watson. That’s pretty much my extent of my knowledge of Sherlock Holmes. I love reading, but have never read a Sherlock Holmes book. Upon seeing this film, I was expecting a bit of a background about Holmes, or maybe even a beginning point where Holmes becomes a detective. This is not what the film is about. It throws you in the deep end of a Holmes story and expects you to understand everything and everyone in it. This is not always a bad thing, as a little mystery in a film is a good thing. However, too much mystery can be messy.

Upon researching a bit more once I got home, it turns out that Sherlock Holmes’ creator, Sir Arthur Conan Doyle actually does not disclose much about Holmes’ world outside his detective work. He does not write much about his family, his past education or his love life. So this film can be forgiven for its lack of character development. Yet, I still believe that a director such as Guy Ritchie could find a way of including some type of subtle character development, whether or not it be through words. Perhaps he was just trying to stay true to the books, as many directors who are adapting novels into movies do. One thing is certain, there must be a sequel to this film, as too many questions are unanswered here for there not to be. We can only hope so anyway, or it will be one of those films I will be thinking about for years to come, still trying to figure out why certain things were there in the movie. Such as, does Watson’s betrothed, Mary, really look a bit suspicious, or is it just me? Or was Irene Adler constructed so basically because she is to have an unravelling or character in the future? These are the things I am wondering about anyway.

Review
The highly anticipated “Sherlock Holmes” will delight many, but disappoint many others. The film ultimately does what it sets out to do, which is entertain the audience. It is nothing short of entertaining with its special effects and action sequences, but it does certainly lack substance in certain areas, in particular, that of character. “Sherlock Holmes” opens with the legendary Sherlock Holmes (Robert Downey Jr.) and his partner, Dr John Watson (Jude Law) stopping the evil Lord Blackwood (Mark Strong) from taking the life of a sixth young woman by using his black magic. Lord Blackwood is sentenced to death and hung, but somehow comes back to life. Holmes is once again called upon to stop Blackwood, who also has a keen interest in Holmes.

First and foremost, this film is thoroughly entertaining. The special effects and the story will keep audiences entertained and capture their attention for the whole time. There are some stunning visuals of London in the 1800’s and the period is perfectly captured by director, Guy Ritchie. It is obvious that this film has been made by Ritchie, as it contains dark humour and has a rough edge to it. It also contains a few fighting scenes which are reminiscent of his earlier films. He does do a good job, but there are quite a few criticisms of this film. Firstly, there is not much character development and many things that do not seem to make sense. As a stand alone film, it does not work quite so well. Ritchie assumes that the audience knows who Holmes, Watson and Irene Adler (Rachel McAdams) are, and does not attempt to give the audience a helping hand as to find out where these characters have come from and why they are the way they are, and why they have these relationships with each other. Apparently, the Sherlock Holmes creator, Sir Arthur Conan Doyle, was not a fan of the retelling of each of the characters and their personal stories in his novels, so Ritchie may be forgiven for making this choice in his film, as he stayed true to the novels. However, many audience members will be sure to feel lost, as they would not have heard much about these characters before seeing this movie. The film does also leave room for a sequel, as there are unanswered questions both during the film and at the end of the film.

Robert Downey Jr. does definitely shine as Sherlock Holmes. He is quirky and puts a new spin on the traditional Sherlock Holmes, making him more rugged and comical. He is also extremely likable. Jude Law is also perfectly cast as Watson. The two actors compliment each other on screen and play off each other. The characters are both witty and quick, making their relationship interesting and humorous. The screenwriters must be complimented for the way they have written the relationship between Holmes and Watson. However, Rachel McAdams does not shine. She does not seem suited to the role of Irene Adler. One would expect, as she is said to be a criminal, for her to be far more devious in nature and bordering on the femme fatale role, rather than just plain. There does not seem to be much depth to her character and can in fact be quite boring at times. There are moments throughout the film where it is unclear why she is even there. Adler and Holmes were supposedly madly in love with one another once up a time (or, we suspect this, but there is not spark or on screen chemistry between her and Holmes. There is suggestion towards the end of the film that if there is a follow up, she may have a bigger role then, but her role is almost useless in this film. It would seem that Kelly Reilly, who plays Watson’s fiancé Mary, would have been more suited to the role of Irene Adler than McAdams.

Overall, “Sherlock Holmes” does what it sets out to do, entertain. It is witty and clever, and people will be excited to learn of all of Holmes detective methods, but the connection to the characters may not be there as much as one would hope.
6.5/10