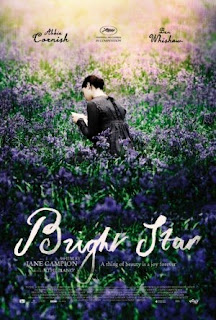 In My Own Words
Let me just start of by saying how much I love this time of the year when it comes to movies. Not that I don’t love this time of the year for other reasons, but Boxing Day and New Years are great for new movies. I spent most of December looking forward to the 26th of December and the onslaught of new films being released on that day. This was one of the films that I had been looking forward to seeing.

My trip to the cinemas today to see this movie did not go as much to plan as I thought it would. Being a public holiday and a rainy day in Sydney town, everybody wanted to go to the movies. My local cinema would have had at least 10 sold out sessions today. I turned up to watch the 1:10pm session of “Bright Star”, only to find out it was full and I had to buy a ticket for the 4pm session, which eventually became sold out too.

I enjoyed “Bright Star” as much as I thought I would, which is always a pleasant finding. Abbie Cornish was absolutely delightful, which I was very happy about. It was quite a different role for her, as I have never seen her in a period piece before, but she pulled it off beautifully. The film was visually stunning, one I would definitely buy on DVD so I would be able to watch the most breath taking scenes again. I am also not ashamed to say, this is the only film I have seen this year that has had me in tears at the cinema.

Review
“Bright Star” is the highly anticipated period romance from celebrated director, Jane Campion. The film is extremely romantic and is nostalgic of the days of falling in love without the technology of mobile phones and the internet. It is the semi-biographical story of the romance between poet John Keats and Frances “Fanny” Brawne. Set in 1818, Fanny (Abbie Cornish) cares more about fashion than poetry, until poet John Keats (Ben Whishaw) and his business partner, Charles Brown (Paul Schneider) move in next door. They fall for each other, but it is a love affair plagued with class prejudice and sickness.

“Bright Star” is truly amazing. It is beautifully filmed and cast. Campion is in her element with a film such as this and this film shows how well she works with a project such as this. Everything about the film is stunning. However, the main criticism people will have of this film is that it is quite slow. It takes awhile to get to the point of the film, but there is a reason behind this slow pace. “Bright Star” exhibits fantastic story and character development. The audience is able to completely identify with the characters and feels like they know the characters personally, and this makes the slow pace of the film quite acceptable.

Abbie Cornish is amazing in this film as the young Fanny, who is first and foremost concerned with fashion and sewing until she meets Mr Keats. Her performance is amazing as it is extremely heart-felt and at times, tear jerking. It could well be her best role yet, although she was superb in “Somersault” and “Candy”. There were rumours that she may have been up for a Golden Globe nomination, but due to heavy competition this year, she was left out. However, there is always hope for an Oscar nomination for her. Ben Whishaw is far from bad as John Keats, but Cornish is definitely the star of the film. Both Cornish and Whishaw are brilliantly cast, as they work so well together on screen. The chemistry between the two is extremely believable and they are visually suited to being on screen together. Paul Schneider is also noteworthy as the unlikeable Charles Brown. The audience feels real hatred for the sarcasm and immaturity of his character.

The cinematography of “Bright Star” is superb. The images and the way in which they are filmed are visually stunning. The choice of shots and editing is spot on to show the importance of certain scenes and highlight the emotions that the characters feel. As one would expect with such a romantic film, there are some amazing visuals involving flowering meadows and butterflies that one should definitely watch out for. The costumes are always noteworthy, especially those which Fanny wears.

“Bright Star” is an amazing film on so many levels. As may be expected from it though, it is not a film that everyone will enjoy for its subject content and its pace. However, it is definitely one that should be seen in order to admire some amazing acting, cinematography and beautiful visuals.
8.5/10