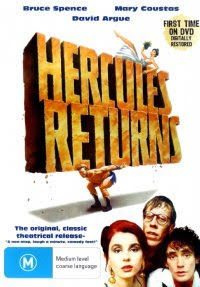 In My Own Words
Welcome to the first Hidden Gem post! Hidden Gem’s are movies which are not well known, but are definitely memorable. When you are a movie buff, you tend to find quite a few of these films. For Movie Critical’s first Hidden Gem, I’ve chosen “Hercules Returns”. My Dad has been asking me to review this for months, so here is the answer to his pleas! I also think this is a perfect movie to start with as it is an Australian movie and, being Australian myself, I would love build recognition for Australian films.

I can’t remember the first time I saw “Hercules Returns”, although I know it was on video quite awhile after it was released. Afterwards, my Dad, brother and I quoted lines from it for years and years. We still even quote it here and there nowadays. It’s just one of those movies that has so many memorable lines in it. “Hercules Returns” is an extremely funny and random film. Other people may not find it as funny as what my family and I did, but I do know it has a big cult following here in Australia. I would love more people to watch this movie and discover the insane world of “Hercules Returns”!

Review
If the name “Hercules Returns” conjures up images of the long-awaited sequel to Hercules and a serious period piece set in Roman times, you are severely wrong. Brad McBain (David Argue) is an ex-employee of one of the biggest cinema chains in Australia and wants to re-open a run down classic cinema palace. After restoring the palace, he decides that he wants to show the last film shown at the cinema before it closed down ay the opening night. That film happens to be “Hercules”. Unfortunately, he doesn’t find out until the very last minute that “Hercules” is all in Italian and it has no subtitles. His friends and business partners, Sprocket (Bruce Spence) and Lisa (Mary Coustas) come to the rescue as the three of them decide to dub the film. The result of which is hilarious and absolutely nothing like the original “Hercules” was ever supposed to be.

The film is considered to be a B grade film, but is an example of how a B grade film doesn’t necessarily mean a bad film. The concept of the film follows in the footsteps of Woody Allen’s film, “What’s Up Tiger Lily” by dubbing an already made film with something which is the complete opposite to the original story. One can only imagine how long it would have taken to match a new story and its jokes to the original footage. One also feels encouraged to watch the original film to find out the real story behind the images. However, try and watch the original without remembering the dialogue from “Hercules Returns”, it’s impossible. It is extremely clever and as mentioned before, extremely funny. For anyone who likes random and silly humour, this is the movie for you.

The acting is not amazing, as there is actually very little of it to be done as the “Hercules” movie takes up the majority of the feature. Although, Coustas is hilarious as the quick-witted Lisa and Michael Carman is believable as Sir Michael Kent. The film is more centred around the comical value rather than the dramatic so it is excused for not having award winning performances.

“Hercules Returns” may be hard for some people to find, especially those of you who are overseas, but if you are keen to see it, it is easily ordered over the internet. It has recently been released on DVD and is definitely a movie worth seeing if you are needing a laugh.