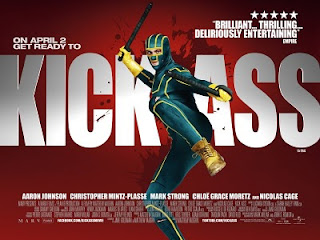 In My Own Words
“Kick-Ass” is definitely one film that I had an opinion about even before I saw it. I have been looking forward to this film coming out for quite awhile, even before most people knew about it. As soon as I heard that it wasn’t a typical superhero movie, I was ready to line up for it as I love a film that defies the norm.

However, even before I saw this film, the controversy surrounding it got my blood boiling. “Kick-Ass” has come under scrutiny because of its violent scenes and coarse language. Not only this, but most of the violence and bad language comes from 13 year old Chloe Grace Moretz. Many people have been up in arms about this, and don’t get me wrong, I can see how some people would find this offensive and wrong. My argument against this is that the movie is rated MA15+ in Australia and R17+ in the USA for a reason. People have taken their children to see this movie completely ignoring the censors warning and assuming it to be a typical superhero movie. If you ignore these censors, then yes, you will be completely shocked and if you take your children to see this, you will wish you hadn’t. Going to a film such as this, knowing what it is about and being offended, would be like watching a porn film and being offended by the sexual content. If you do get offended by strong language and violence, nobody is forcing you to see this film so don’t complain about it. This is the same for Chloe Grace Moretz. No doubt you would’ve heard some of the things which she does in this film and if you think this sounds horrible, nobody is forcing you to watch her. Miss Moretz is no stranger herself to horrific films after staring in the 2005 remake of “The Amityville Horror” and she will be starring in the upcoming “Let Me In”. I doubt she will feel particularly scarred from this role. I would love to hear other people’s opinions on this film and its surrounding controversy as well, so please feel free to talk about it here. My advice is, take note of the classifications and don’t complain if you don’t.

Review
“Kick-Ass” is unlike any other superhero movie. It is probably the most in your face superhero movie you will ever see, but nevertheless a breath of fresh air and great entertainment. Many people will find much of the film too hard to handle with its extreme violence, but if you can get past that and realise that this is only a movie, it is actually quite fun to watch. It has one valuable message in it, that ordinary people can do extraordinary things. Of course, just remember, that this doesn’t mean that those extraordinary things will always involve killing the bad guys. Invisible high school student Dave Lizewski (Aaron Johnson) has decided that he wants to become a superhero. He has no super powers and his only asset is his good heart. After his alter ego, Kick-Ass becomes an internet phenomenon, he inspires a whole new group of superheroes. Enter Big Daddy (Nicholas Cage) and his sidekick and 11 year old daughter Hit Girl (Chloe Grace Moretz). These two are the real deal and come equipped with their own special weapons and fighting moves, also a motive for revenge on Frank D’Amico (Mark Strong), who is after Kick-Ass.

The film opens with a taste of things to come, confronting and gruesome, but also hilarious. Most of the shocks come in the first half of the film and if you are not offended by then, you won’t be. Matthew Vaughn’s film is almost like a “Kill Bill” for younger people and Vaughn direction is much like that of Quinton Tarantino’s. There are some great moments in the film, with the right cinematography and editing chosen for the right scenes. The soundtrack is also notable, sometimes being creepy and other times being fun and uplifting. The script is witty and very well written. “Kick-Ass” is completely original for the most part, but it still has many aspects of it that are typical to a superhero movie. It does tend to get cliché towards the end and although it is still suspenseful, it also becomes quite predictable.

Aaron Johnson gives a solid performance as Dave/Kick-Ass. He draws a lot of laughs, but at the same time a lot of sympathy. He can be so pathetic in the first half of the film that you feel sorry for him and even embarrassed for him. Nicholas Cage also doesn’t give a bad performance, but it is quite a strange performance. He looks so much like Stanley Tucci as Mr Harvey in “The Lovely Bones” that it distracts from his character in the film. Chloe Grace Moretz is the star of the film, although she is also the most controversial. The people who do not find her role offensive, will find her very entertaining and girls will find her empowering. It would be true to say that if the character of Hit Girl/ Mindy was only a few years older, she would not have been as controversial. Yet if she was, she would have been the same run of the mill female superhero and be branded as corny. Hit Girl is anything but that. She is completely out of the ordinary and although some of the things that leave her mouth are shocking, at least she isn’t like every other female superhero that has been and gone.

It cannot be reinforced enough that “Kick-Ass” is not a film for everyone. It is almost difficult to pinpoint the target audience for this film as it is like a high school film, crossed with a superhero action film, crossed with a shock comedy. Yet, if you get past all the controversy and the shock, it is a great and entertaining film. The ending indicates that there may be a sequel, but one has not yet been announced yet. Sequels are known for stretching past what the first film has done, so we may be in for more “Kick-Ass” shocks in the future!
7.5/10