Clash Of The Titans 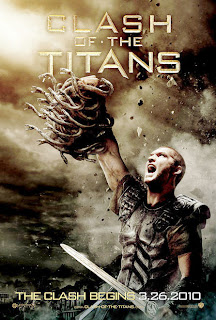 In My Own Words
Curiousity usually gets the better of me with movies. If a film is based on a book, I will read the book before I see it. If the film is a remake, I will see the original before I see it. However, this was not the case with “Clash Of The Titans”. I have not seen the original “Clash Of The Titans”, and this time I was actually really pleased that I hadn’t. It felt like one of the only times I have been able to judge a remade film as a stand alone film. I have heard that fans of the original film have not liked the remake, and that there is numerous differences between the two. So my thoughts on the film may also be different to those of the original film’s fans, as I was watching it in a different way to them. I will watch the original “Clash Of The Titans” in the future. It will be interesting to see whether I like the idea of seeing the original after a movie, more than seeing it before, although I guess that will always depend on the movie I am watching.

My opinion of the film, definitely not the best blockbuster action movie I have seen, far from it. Yet the story kept me entertained for most of it. I have never known much about Greek mythology. I had a crash course during my Media, Ideology and Culture class a year and a half ago in college, but that was only the basics. So I learnt a lot more during this film and I would love to find out more it in the future. Oh, by the way, remember how in my review for “The Rebound” I mentioned how at the cinemas, it is like you are seeing double when seeing what is now showing? This is another type of film I can add to the equation. “Clash Of The Titans” and the upcoming “Prince Of Persia” look incredibly similar in the trailers. Particularly since Gemma Arterton is in both films.

Review
“Clash Of The Titans” is a film that could have been so much more. The subject matter is one that so much could have been achieved with, yet it falls remarkably short. For those who are not interested in Greek mythology and special effects don’t strike a chord, this film will be an utter bore. The story and special effects are what save the film. Perseus (Sam Worthington) is found at birth by a fisherman and his wife, who raise him as their own. When the human race rebels against the Gods, Hades (Ralph Fiennes) kills his family in his attack on the people. Perseus vows revenge against the Gods and sets fort with the soldiers of Argos to battle the Gods. It is during this time that Perseus is approached by Io (Gemma Arterton) and told that he is in fact the son of Zeus (Liam Neeson), making him half man, half God.

What makes “Clash Of The Titans” a forgettable film is purely a case of bad directing. The film is not suspenseful or gripping at all in the way that an action film should be. It just feels weak and at no time do you feel completely engrossed in the film. Although Sam Worthington is usually in his element in an action film, as has been proved in “Terminator Salvation” and “Avatar”, this role does not do him any justice. His dialogue feels over-acted and at times almost inappropriate and silly. The camera angles and styles used during several of the crucial scenes do not work well and all and do no justice for the actors or the story. The camera use does not compliment Worthington’s performance at all, and does the same thing for Gemma Arterton’s performance. This also comes down to a bad choice of dialogue in the screenplay. Ralph Fiennes and Liam Neeson do well as the two deities, but their roles are quite miniscule compared to Worthington’s. One can also argue that there is perhaps too many characters in the film, and not enough room for character development of each of them. Perseus is well constructed, but there is really no room for any more character development for others.

On the other hand, the special effects and the visuals are quite stunning. They are well crafted and bring the world of Greek mythology to life. Such visuals as the Pegasus and Medusa are gorgeous. They also seem completely realistic, which is always a huge advantage when undertaking a mythical project. The interpretation of the ancient, mythical world is well done. It is very interesting and a great lesson for those who are not familiar with Greek mythology. The film does differ from it’s original, which some people will appreciate, while others will not be impressed by.

It is a shame that “Clash Of The Titans” does not measure up to what it could have been. It is nothing more than a mediocre action film with a good subject matter. With a better direction style and a stronger screenplay, it could have been one of the great action/adventure films of 2010, but instead is a film that will not be remembered in years to come, except as maybe a helpful resource when studying Greek mythology and its characters.
5/10