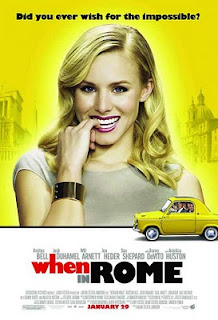 In My Own Words
Ah, the chick flick. I have not met any girl who can resist a chick flick, and any girl who tells you that she doesn’t like chick flicks is lying. I’m not saying that chick flicks are the favourite genres of every female, but they are take up so little brain activity that they are just easy and fun to watch. A chick flick is to a female what an action movie is to a male. Guy’s love watching big explosions and action heroes, while girls like watching romance and female heroines. It all makes sense. In my experience, guys have bagged me out when I have wanted to go and see a chick flick, but what these guys need to realise, is that a chick flick is our answer to the action film. And part of me did really want to see “When In Rome”, but mainly for the fact that Rome and New York City are in one movie. I have yet to visit Rome (even though I am dying to), but New York City is, like many other people, one of the great loves of my life.

I noticed something interesting while at the cinema today. I went to the 12:05 session of “When In Rome” today by myself. Some people find going to a movie by themselves an act of desperation. I once heard one girl I used to know complaining about how much of a “nigel” she was going to a film by herself. I have done this on many occasions and I don’t feel like a “nigel” at all. Today when I went, there was about 6 other people in the cinema by themselves. There were maybe only about 20 people in the cinema, but I thought it was interesting that there were so many people there on their own. I think I might put it down to the time of day. Most of the people who came in to the cinema by themselves had shopping bags with them, so maybe it was the fact that the cinema was in a shopping centre. Once people finish their shopping, they have time and look for something to do so they go to a movie. I just find it interesting how people think it is taboo to go to a movie by yourself, because you may be missing out on a great movie just because you can’t find someone to go to it with you!

Review
“When In Rome” is the typical chick flick, which means that most guys would rather poke their eyes out than see it. It is not the worlds best movie, but there is something fun, funny and very cute about it. Beth (Kristen Bell) has always had bad luck in love and life and it only gets worse when she has to make a flash trip to Rome for her sister, Joan’s (Alexis Dziena) wedding. Down and drunk, Beth takes a venture into the Fountain of Love and instead of throwing a coin into the fountain to wish for love as most people do, she decides to take 5 coins. It is only when she gets home and starts getting strange mans following her around professing their love for her, she finds out that if you take someone else’s coins, they will fall in love with you. A real problem arises when she actually falls for Nick (Josh Duhamel), who she believes is one of the men who’s coin she has retrieved.

Nothing about “When In Rome” makes it a great film. It won’t be remembered in years to come as there is nothing which really makes it stand out. However, it is very light, fluffy and cute. It is definitely an easy watch and extremely predictable. The script isn’t all bad, there are some very funny moments, although it can be very corny. There is not much more to be expected from this film though, it is very stereotypical in the way that a girl has bad luck in love and then finds love. Even though it is very predictable, there are no boring moments in the film. The scenery of Rome and New York are well captured and can at times, detract from the story and characters at hand, which some people may see as being bad and others see as being a good thing.

Kristen Bell is adorable as Beth. Her character of Beth does seem pathetic at the beginning, but she does become more likable towards the end. Her and Josh Duhamel definitely have on screen chemistry and make a very cute couple. However, the four men that fall in love with her are loose ends. They are all pretty painful, more so than they are supposed to be. Their characters are all more annoying than funny. They are probably the biggest turn off in the film and so over the top that it is ridiculous.

Again, keep boys as far away from this film as you can. It is a stereotypical chick flick, but not the best chick flick you will see this year. The best words to describe “When In Rome” are predictable and the two words used the most in this review, cute and adorable. It is a great film to see if you plan on not thinking for an hour and a half or taking a trip to Rome or New York.
5/10