The Book Of Eli 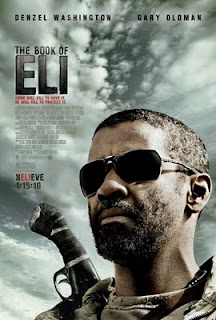 In My Own Words
I wish this movie was adapted from a novel. Well, there is a novel called “The Book Of Eli” by Sam Moffie, but it bears no similarity to the film. The reason I wish there was a book of this film is because all my questions could be answered. Very rarely do I get completely confused by a film, especially a film like this. If I was confused by a David Lynch movie, another story, but a film like this shouldn’t be so hard to figure out. At first I thought it may just be me, but after I asked my movie companion the same questions I was asking myself and he couldn’t answer them either, I was satisfied that it wasn’t just me. I do really wish that this movie was based on a book so that I could read the book and completely understand what I had just seen. If this movie was a book, I could imagine the book being really quite good, as it had the potential to be a good film based on the story and a book can express things in more words (funnily enough). Instead, I will have to guess the answers to my questions or I may be able to one day interview the Hughes brothers and writer Gary Whitta, and question them myself. For example, why do people ask Eli to show them his hands and who does this distinguish him from? I would love to put more of my questions here, but I don’t want to spoil any of the movie for people who are planning to see it!

Review
“The Book of Eli” is a film that had the potential to be very good, but is not very well scripted. The huge problem with this film is that there are not nearly enough explanations offered as to why things are the way they are and therefore seems incomplete and not nearly as tense or suspenseful as directors, the Hughes brothers would want it to be. In the future, the human race has taken a huge step backwards as a result of the war making things such as food, water, education, shelter and power scarce. Eli (Denzel Washington) is on a lone traveller making his way across the land with a sacred book which is considered to be a weapon. When he arrives in a civilised town, he comes in contact with Carnegie (Gary Oldman), who is delighted to meet someone from before the “Flash” who remembers what life used to be like. He becomes obsessed with Eli when he realises that Eli is carrying the book which Carnegie has been so vigorously searching for. Eli tries to escape Carnegie’s town so to keep on his path of taking the book westward.

The good thing about this film is that in theory, it is a very good idea for a film. Unfortunately, it does not execute this idea to its full potential. It is very slow to get going as it is not until the 40th minute that the film actually offers any explanation as to what is going on. Even then, it doesn’t at one moment feel as though it hits the level of suspense that one would expect it too. The film has plenty of action and drama in it, but it feels slow and dull. Although the story itself is very interesting, it definitely feels as though the film’s writer takes his time to tell it and even then has problems trying to tell it. In hindsight, it is not an easy story to tell on screen, but it should have at least had more background so that the audience felt more comfortable in their understanding of what was going on. Possibly the idea of explaining what has happened to society as we know it gradually through the film may have been what the film makers were planning to do, but it does not work.

There are some good points about the film. For one, the cinematography is very good. The action sequences are very well filmed and edited. There are different filming styles used throughout the film which do actually make it visually pleasurable to watch. The musical score is also very fitting. It is not Denzel Washington’s best performance, but it is not a bad performance. The character of Eli is not a very complicated one to play, suggesting that this is one of the easier roles that Washington has played. Gary Oldman, on the other hand, is very good as the bad guy, Carnegie. He shows a ton of emotion in bringing this character to life and is the one that the audience will connect with the most.

The story is the foundation of any film, and if the story is weak for any reason, there is no chance that a successful film will come of it. “The Book OF Eli” succeeds visually, but this is about that only area that it does succeed in. Not a strong film by any means and will most likely be forgotten in the near future.
4.5/10