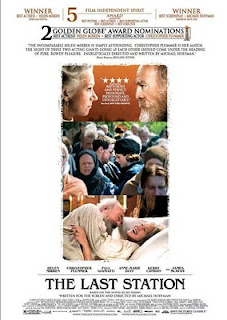 In My Own Words
Today I am sure I was the youngest person in the cinema to watch “The Last Station”. I’m not entirely sure why that was, but don’t get me wrong, it didn’t bother me at all. I don’t particularly see why “The Last Station” has been particularly stereotyped as being just for the older audience. Maybe it’s because in Sydney it was advertised as closing the Seniors Film Festival at Dendy Cinemas 2 weeks ago, or maybe it’s because Helen Mirren and Christopher Plummer are headlining it. Or maybe it is because the combination of Leo Tolstoy, romance and the early 20th century time period just do not seem even remotely interesting to the youth of today. I’m not quite sure that many of the young generation today would know who Leo Tolstoy is, unless they are avid readers like myself. I myself think that “Anna Karenina” is one of the beautifully written books, so I was overjoyed to know that there was going to be a movie about the great man and that Christopher Plummer was playing him. I really believe Plummer did the role complete justice, as did Helen Mirren in playing Countess Sofya.

I have always had a love hate relationship with films which are filmed in a non-English speaking country, but have English dialogue. “The Last Station” is another one of these films. Sometimes I think I would prefer to see a film set in a country and spoken in the same language as it would make it more realistic, but at the same time I understand why such films are done in English as it increases the audience scope. So many people get put off by the idea of going to see a film in a foreign language as they feel like it is work watching as well as having to read at the same time. Some films with the foreign country and English dialogue can really irk me, especially when the dialogue also has the wrong accent, but this film was not one of them.

By the way, does anyone else have the problem where anytime they see Christopher Plummer, all they can think is “The hills are alive with the sound of music…” No? Maybe it’s just me. Anyway, these are my own words and here is my review.

Review
“The Last Station” is one of those films which you watch, and forget that you are actually watching actors act. Although the film can seem a bit slow in parts, the acting is absolutely superb and is to be celebrated. The film may not suit all film goers, as period piece author biopics are not to everybody’s liking. “The Last Station” retells the last year of celebrated author, Leo Tolstoy’s (Christopher Plummer) life. In particular, it focuses on Tolstoy’s relationship with his wife, Countess Sofya (Helen Mirren). As a result of mixed political views, their marriage of 42 years was extremely turbulent, but could also be extremely passionate and loving. The film completely captures the raw emotion of their relationship, as well as the relationships of Tolstoy and the Countess with all the people closest to them.

Although the film is there to tell the story of Tolstoy’s last year, it is more about the characters. The direction by Michael Hoffman is spectacular in this way, as he brings out the best in all the actors who take part in the film and it is unbelievable how the audience feels as if they personally know and empathize with each of the characters. Unfortunately, being a character driven film, this does slow down the pace of the film which some audience members will find to be a disadvantage, while others will realize that every moment in the film adds to the realism of each of the characters. The visuals are also quite stunning of the Russian countryside in which Tolstoy and his family made their residence. The only downfall with the direction is that some of the landscape panning shots are a little too fast and do not allow for the audience to take in all of what they see on screen.

Both Plummer and Mirren earned themselves Academy Award nominations for their performances in “The Last Station” and this is not a surprise at all. Mirren is absolutely superb as Countess Sofya. She shows so many emotions within the film and does each perfectly. Mirren has said of this film that she did not look too much into how the Countess was in real life, but created her own interpretation of how she believed the wife of Tolstoy should have been. She excels at this and definitely brings the character to life. Plummer is also wonderful as Tolstoy, created a completely lovable characters whom the audience immediately falls in love with. James McAvoy is also brilliant as Valetin Belgakov. When he meets Tolstoy for the first time is particularly a stand out moment, showing the true emotion of a pupil meeting his hero for the first time.

“The Last Station” cannot be missed by anyone who is a Tolstoy fan, or a fan of great acting. There are many moments which linger once the film is finished and make this one of the finest biopics of the year.
8/10