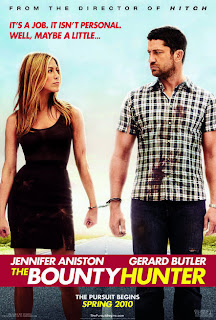 In My Own Words
I try not to take too much notice of other film reviews before I see a film myself and can form an opinion myself. I don’t like to feel as though I have been persuaded to feel a certain way about a film. But the reviews for “The Bounty Hunter” were pretty hard to ignore, who can ignore the declaration that this is the worst movie of 2010! I was not looking forward to seeing this film for that reason. Maybe I wouldn’t have seen it at all until it came out on DVD unless I had a free ticket. Walking into the cinema, I was definitely prepared to see the worst movie I would see all year. It’s funny how a film that has a stigma attached to it as being a really, really bad film can sometimes make people want to watch it. I was actually curious to see it to make an educated decision as to whether it really is the worst film of the year, and to see really how bad it was. Almost like when I wanted to see “Gigli” with Ben Affleck, Jennifer Lopez and Al Pacino, just to see how horrible it really was.

Well, it wasn’t good, but it wasn’t the worst film I had seen this year at the cinemas. I believe “Old Dogs” takes that prize thus far. So it’s probably the second worst movie I have seen so far this year. I am pretty sure that minus the film’s two main stars, the film would have been a B grade, straight to DVD film. One good thing did come out of this film though. I wasn’t a big Jennifer Aniston fan before this film, but she was probably the best thing about this film and I was impressed that she could carry such a bad film.

Review
“The Bounty Hunter” is just silly. That is the best word to describe the film. It is over the top and completely predictable. Even by looking at the poster for the film, you can tell exactly what the ending is. The concept is not one which is meant to be serious in the first place and does seem to be perfect for a comedy, but could have been toned down far more than how it was presented. Every ex-husband out there will toy with the idea of taking their ex-wife to jail and do so with glee, but the presentation of it as an on screen comedy just doesn’t work. Milo (Gerard Butler) is an ex-policeman who makes his money by being a bounty hunter. He is over the moon when he finds out that there is a warrant on his ex-wife, Nicole (Jennifer Aniston). Milo becomes mixed up with a story which Nicole is researching for her paper and it turns out he is not the only one after his ex-wife.

The major problem with this film is that everything is completely exaggerated. Perhaps the most irritating exaggeration is the music in the film. The music does not compliment the scenes, it overpowers it. There is no such thing in this film as background music and a subtle musical score, it is in your face the whole time and is just plain annoying. The characters are also extremely exaggerated. Maybe not the characters of Nicole and Milo, but the characters around them just seem to have way too much character. It is almost as if director, Andy Tennant is trying too hard to make “The Bounty Hunter” into a hilarious and successful film. Maybe if he didn’t try so hard, it wouldn’t have come across as such a mess.

Gerard Butler definitely does not give his bets performance in the film, but he is definitely not one of the striking bad points in the film. There isn’t a great deal of acting or even effort that goes into his performance. Jennifer Aniston does not do a bad job either. However, the role is much like other roles which she has done in the past and is a role she does well. These two stars save the film from being a complete waste of time.

“The Bounty Hunter” has attracted interest purely for its main stars, there is no other reason to see this film. There are no moments in this comedy which will make you laugh out loud, but rather have a bit of a giggle at certain moments. Not the worst film of the year, but not far off.
3/10