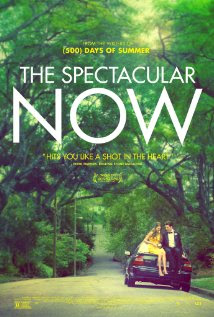 Year: 2013
Running Time: 95 minutes
Director: James Ponsoldt
Writers: Tim Tharp (novel), Scott Neustadter and Michael H. Weber (screenplay)
Cast: Miles Teller, Shailene Woodley, Kyle Chandler, Jennifer Jason Leigh, Brie Larson
The Spectacular Now screened at Melbourne International Film Festival on the 31st of July and 10th of August 2013.
Now showing in the United States, please see local guide for locations and times. Opening in Australia on the 5th of December 2013 and distributed by Buena Vista.
Very rarely does a high school coming of age film create a real emotional connection with it's audience and avoid the stereotypes associated with the genre.
The Spectacular Now is one of those rare films which has a simple story, yet is emotionally stimulating and challenges you to see how your actions in the here and now can affect the shape of things to come. With subtle yet wonderful performances. this film is not exactly uplifting, but does leave you in love with the two main characters and absolutely wanting more.
In the last year of high school when everyone is deciding which college they want to go to and where they will move away to, Sutter (Miles Teller) is more content just enjoying life as it is and not worrying about the trials and tribulations of things to come. When he meets and falls for Aimee (Shailene Woodley), a shy girl who is naïve to Sutter's world of pre-alcoholism, he starts to recognise the factors in his life which do need to change which are destructive to both himself and those who he cares for.

Whilst the beginnings of the film indicate that this may just turn out to be "just another teen movie", it is most definitely not. The great thing is that despite not being stereotypical in it's delivery, The Spectacular Now is absolutely a film which teenagers can relate to, especially those who are at the crossroads and trying to figure out what to do once their schooling days are over. People who are past those days will also be able to relate to this film, as there are a great deal of adult themes used throughout the film. Unlike most teenage style movies, there is real depth to this film and a whole lot of feeling. It isn't quite a tearjerker, but is more emotionally challenging than draining.
The story is almost simplistic as it is not overdramatic and filled with subtlety. It is more to do with how the present and our decisions now shape us for the future. Sutter is a budding alcoholic, but he isn't at the point just yet where damage has been done. He is rather in the process of getting to that point. While he is just having fun now, the ball is rolling for damage later on and The Spectacular Now is about this time in people's lives when the future can be altered. This is not to say that there are not moments when it feels like things are really terrible and they are very emotional moments. The screenplay is really very good for being able to create this in a film. 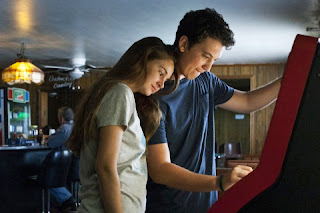 The characters of The Spectacular Now are what really make the film spectacular. Miles Teller's Sutter is such a complex and interesting character. He is a cocky teenager who is into partying, drinking and girls and seems like he is on the path to self-destruction. He doesn't sound like a particularly likable character, but as the film progresses and his inner demons are revealed, you actually find him quite endearing and sympathize with him. Teller does an amazing job in this film and the way his character develops throughout the film is wonderful. His absolute standout scene is with Jennifer Jason Leigh, who plays his mother, in their kitchen.
Shailene Woodley is also brilliant. In a completely subtle performance, she is just adorable from the word go. It is such a controlled performance by Woodley and like Teller, she portrays such a likable character. The audience instantly sympathizes with Aimee and feels sorry for her in all her naivety and worry about what ways Sutter may sway her.
The Spectacular Now is a film that is, as the name suggests, spectacular in all it's subtlety.
8/10
﻿
﻿