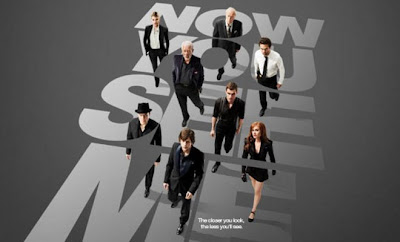 Now You See Me opens in Australian cinemas on the 8th of August 2013 and is distributed by Hopscotch Films.

Now You See Me is one incredibly creative, unpredictable and entertaining film with an amazing cast, but don't expect it to be particularly subtle or realistic at it's core.

Louis Leterrier's film promises an entertaining and fun time and is never for one moment slow or dull. It provides people with a completely unpredictable ending and constant guessing. However, it is a little over-extravagant at times and very farfetched, but the aim of the film is to entertain and it certainly does that. Now You See Me gives us an original film unlike any other we have seen this year or any other year and that is something to be appreciated.

The Four Horsemen magic/illusion group, featuring J. Daniel Atlas (Jesse Eisenberg), Henley Reeves (Isla Fisher), Merritt McKinney (Woody Harrelson) and Jack Wilder (Dave Franco) become an overnight sensation when during one of their magic tricks, they pick an audience member to rob a bank and distribute the money to all their audience members. FBI Agent Dylan Rhodes (Mark Ruffalo) is called in to find out how this group managed to rob a French bank during their show and with Agent Alma Gray (Melanie Laurent) must decide whether it really was magic that enabled The Four Horsemen to commit this crime or is there a Fifth Horseman?

Now You See Me will draw you in and start you guessing straight away. It is the type of rare film that has you fooled, just like everyone in the film. You think you know all the answers, but there is one answer you will be a very, very clever moviegoer to guess. It is a very clever film with a very unique concept. Magic and illusion are mysterious and mystical and as a subject matter to a film it promises the same. `

Now You See Me, like it's subject matter, has no problems entertaining, but it does seem like it tries a little too hard to astonish. The whole film seems like a Las Vegas show (again, like in the film), it is just a bit too over the top and elaborate. At times it tries a little too hard to be an amazing film and gets a bit lost in itself. The majority of the time it isn't too much of a problem as it is just great fun, but it does get to a point where you can almost scoff at how far removed from reality it can get. However, as a whole the film is just a really great piece of entertainment, but it shouldn't be looked at as anything more than that.

Therefore, as one could expect, the film is really quite a visual treat with plenty of confetti and spotlighting. It has it's stars well placed in every scene and many movements resemble a dance routine. Although it is not an action film, the car chase scene is pretty impressive. 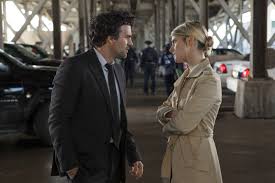 Before one even see's Now You See Me, it is extremely hard not to be drawn in by the astonishing cast which has been assembled. The majority of the cast have somewhat easy roles to play (as opposed to other characters they have played in past films), but they all play their roles to the very best of their ability. Mark Ruffalo is the stand out of the film as he is so convincing and natural in his role and a great lead for the film. He has great on screen chemistry with Melanie Laurent, who is also very convincing in her role even though the side story and ending of the film for the two doesn't really add anything to the film. Woody Harrelson is also a lot of fun and quite comical in his role and Dave Franco shows his versatility as an actor by adding Now You See Me to his resume. Michael Caine and Morgan Freeman also work well together and by themselves.

As a whole, you may as well be watching a magic show when you are watching Now You See Me. It is overdone in many ways, but you enjoy the spectacle and the players and enjoy the thrill of the unknown.


You may have also seen Jesse Eisenberg in....
The Social Network as Mark Zuckerberg

You may have also seen Mark Ruffalo in.....
The Avengers as Bruce Banner/ The Hulk

You may have also seen Isla Fisher in......
The Great Gatsby as Mabel

You may have also seen Dave Franco in....
Warm Bodies as Perry

You may have also seen Michael Caine in....
The Dark Knight Rises as Alfred

You may have also seen Morgan Freeman in....
The Dark Knight Rises as Fox