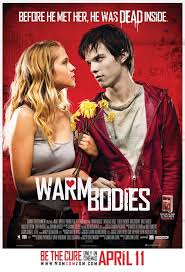 Review
Well, another zombie apocalypse film. That seems to be in fashion at the moment. And....it is another case of young love between the dead and undead.

However, don't be put off. Warm Bodies is not like any other typical teen romance with two unlikely lovers. A fantastic script makes this film funny, clever and witty and some perfectly cast young actors give some great performances. As a result, the appeal of this film reaches far beyond young adults and makes this a film that everyone will enjoy. Just as long as you don't mind seeing a few gory details because you couldn't really have any type of a zombie film without them.

R (Nicholas Hoult) is a corpse (another word for zombie) like no other. He is sure that he is the only one walking the Earth in this zombie apocalypse who wishes for more and desires to feel something once again. Out on a hunt for food he comes across a beautiful human, Julie (Teresa Palmer) and he decides to go against making her his next meal and takes her to safety. During their time together, R starts to feel again when he falls for Julie and he starts to change on the inside and out. The two have many obstacles in their way. Not only is R not of the same species as Julie, but he is also the one who made his last human meal out of her boyfriend, Perry (Dave Franco)! 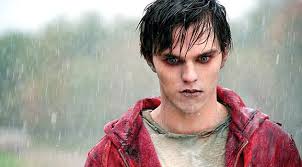 If you look closely, you will see how Warm Bodies is based on William Shakespeare's Romeo and Juliet. R and Julie are the zombie and human version of Romeo and Juliet, who are from "families" who are at war with each other. The first letter of several of the character's are the same as those in Romeo and Juliet who share a similar type of role. There is even a balcony scene.

The main thing that sets Warm Bodies apart from other films that it could be likened to is that this film knows what it is and embraces it. It knows that it is not a dramatic film and doesn't try to be. There is no young love angst involved. Warm Bodies is just entertaining and a great deal of fun. It doesn't want to be taken too seriously and as a result, is a much better film than all the others that it could be likened to.

The script, written by director Jonathan Levine and based on the novel of the same name by Isaac Marion, is very well written. The opening segment where R tells everyone who he is and what has happened to the world is absolutely hilarious. The use of a voice over in order to give R a voice works so well and provides some of the funniest moments of the film. The soundtrack of the film is also put to great use. It enhances the character's emotional moments and provides a bit more comic relief where needed.

Nicholas Hoult's star is certainly on the rise. This is a completely different role for him and he once again proves his abilities as the leading man. He is wonderful as R. He completely embodies the character and makes a very convincing besotted zombie. Hoult also proves that he has a great comedic ability too. He quickly gains the audience's sympathy and has everyone cheering for him by the end.

Teresa Palmer does well as Julie and is a very likable character. It doesn't seem like too far a cry from her previous roles, but she does well all the same. Analeigh Tipton also does well as Julie's best friend, Nora and is a character worth having in the film. Dave Franco does well with the limited amount of screen time he gets, but isn't there long enough for the audience to make an informed decision about whether they like him or not. Rob Corddry is hilarious as R's best friend, M.

Warm Bodies is an absolute treat. It is something unique and a brand of comedy which isn't forced.  If only there were more movies these days with the same kind of spirit.

On a side note....
What is the best thing to come out of "America's Next Top Model"?

Back in 2008 in the 11th season of "America's Next Top Model", a cute as pie ex- figure skater from Sacremento graced our screens in the first episode and ending up finishing third in the competition. Analeigh Tipton gained a large following during the show for her down to Earth personality, her beautiful looks and for how much girls could relate to her. Living in the USA at the time, she was certainly the favourite of all the girls I spoke to. Tipton was complimented in one particular episode as being quite a good actress and the judges saw her as having a Hollywood look.

They had this right.

While many talk of how the modelling and entertainment industry does not take the television show seriously, Tipton has proved that the show can definitely give birth to stars.

While she was signed by Ford Models after the show, she decided that she wanted to study film and the rest is history. Since then, Tipton has starred in The Green Hornet, Crazy Stupid Love, Damsels In Distress and now Warm Bodies.

I must say, though reality TV is frowned upon by many, I believe ANTM has given Tipton a leg up as many were able to see the true person she is and she is such a likable girl that so many people want to see her do well in any profession whether it be modelling or acting.

Her star is on the rise and I couldn't be happier for her!

And by the way, according to IMDb, she is also writing a zombie movie script!

You may have also seen Nicholas Hoult in......
X-Men: First Class as Hank/Beast
Jack The Giant Slayer as Jack

You may have also seen Teresa Palmer in....
I Am Number Four as Number Six

You may have also seen Rob Corddry in......
Hot Tub Time Machine as Lou