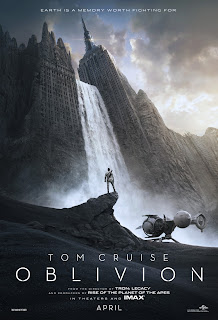 Review
There isn't much wrong with Oblivion.

In saying that, it isn't the best movie of the year but it is entertaining, well done and a great, unpredictable story. It is great when Hollywood turns out a sci-fi blockbuster which isn't completely corny and has some real substance to it.

The film opens in 2077 with Jack Harper (Tom Cruise) informing us how Earth went to war with the alien race, the Scavs and although we won, we lost the planet. He and his partner and lover, Victoria (Andrea Riseborough) live on a station in the skies while on a mission to extract Earth of vital resources before they retreat and leave Earth for good. However, Jack has many questions about who he is and where he has come from that he has been told not to ask. When he rescues Julia (Olga Kurylenko), some of his questions are answered but all of a sudden, he has a whole new set of questions. 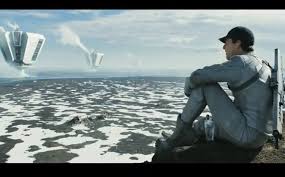 You are drawn into Oblivion right from the word go. The opening sequence is fantastic. It is informative as it lets us all know exactly what happened to the world, who everyone is and what is going to happen. The visuals and score to accompany it just works brilliantly to draw everyone in.

Oblivion is one sci-fi action film that is wonderfully directed by Joseph Kosinski. Everything in the film just works so well together. The screenplay, written by Kosinski, Michael Arndt and Karl Gajdusek is played out very well on screen. What is great is that it is completely unpredictable in parts. Some parts are a bit predictable, but it is a case of when you think you have it all figured out, something you didn't see happening happens because you weren't looking in that direction. Admittedly, around the middle of the film it loses momentum a tad, but picks it back up with a bang.

The special effects are breath taking. The Empire State Building is just eerie as well as being so interesting to behold, as are other landmarks affected by Earth's war. The sound of the whole film is incredible. The sound effects for the drones are particularly good. The musical score is also great for the love scenes.

If you after something particularly action packed, just be prepared because it doesn't click into action mode until halfway through. The action scenes are well worth waiting for though.

Tom Cruise can do action. There is no doubt about that. It's what he seems to love to do these days, which there is nothing wrong with because he is obviously very good at it and people love seeing him do them. He also seems to love playing Jack's, as this is his third film doing so (the other two films being Jack Reacher and Legend). Action man or not, Cruise does still have his dramatic work shining through in various parts through the film. He does pensive and romantic very well.

Olga Kurylenko is fine, but does spend the majority of the film with the same terrified expression on her face and doesn't stray very far from that. Andrea Riseborough is the best of the girls covering all bases. She is particularly good when Jack returns to the station.

Oblivion is fantastic entertainment. A wonderful sci-fi screenplay paired with amazing cinematography and directorial choices makes this film a winner.

On a side note....
Love him or hate him, think he's crazy or completely sane, you can't deny Tom Cruise's star power.

He is a major box office draw and has been so for well over 20 years now. He was perhaps the first film star's name I actually knew when I was a little one back in the 1980's. My mum was always swooning over him as was my drama teacher. I must say, he is aging very well as to me he has barely changed in appearance since I first remember him.

My first "grown-up" favourite film was Rain Man so at 13 years old, you can imagine my amazement when my father rang me when I was away with my mum to inform me that he had just met Cruise (he was married to Nicole Kidman at the time and in Australia at Christmas time to see her family) through mutual friends at a party! I will never forget (as won't my Dad) how I was told how much of a gentleman he is and how he was so happy just to relax and talk about his kids and also about how he wanted to understand Australian sport now.

It is great to know that today he is still that person and no matter what you hear in the tabloids, one thing is for sure. This man loves his fans and loves to have a chat no matter who you are. Just last week at the Oblivion premiere in Hollywood, Cruise arrived hours early to sign autographs and chat to his fans. I love that, there's not many stars who would do something like that.

You may have also seen Tom Cruise in....
Knight and Day as Roy Miller
Rock Of Ages as Stacee Jaxx
Posted by NP1982 at 4:58 AM