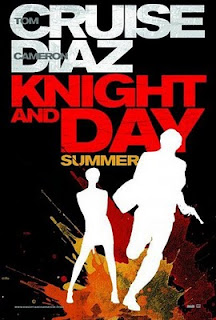 In My Own Words
Some actors can just create box office magic out of anything they touch. I’ve decided to coin the term “box office magic” as there was a term in the Golden Hollywood days of “box office poison”. Katharine Hepburn was at one point in time, as were many other old time stars. Though some stars just make everything they touch turn to gold, such as, in this case, Tom Cruise. The man could be in anything and it would generate millions just from people seeing him on the posters and reacting by going and purchasing a ticket to the film. These actors who generate box office magic don’t have to be in more than one movie a year or two years, but when they do, they don’t need to work for more than those few months that they are filming and promoting because of the money the studio pays them for being box office magic. Other actors in this category besides Mr Cruise are John Travolta, Brad Pitt and his squeeze, Angelina Jolie. Being box office magic doesn’t mean that your most recent movie is a particularly good one, but nevertheless it will still bring in the millions just with their billing. So needless to say “Knight And Day” was extremely highly anticipated, has generated $161 million worldwide so far and it’s not that great a movie. Box office magic! Spread the word!

Review
“Knight And Day” is Tom Cruise’s long-awaited return to the action film. If you are going to see this film purely to see Cruise complete amazing stunts and kill all the bad guys, then you will love this movie. If you are expecting anything else, chances are you will be disappointed. The first thing that strikes you about “Knight And Day” is that it seems extremely dated. The film would have been a hit if it was released at the most the early nineties, but now almost every aspect of it seems old and dated. June (Cameron Diaz) boards a plane to Boston with a handsome stranger, Roy Miller (Cruise), whom she is immediately attracted to. Little does she know, she has now become involved in a dangerous game of cat and mouse between Roy and his ex-partner, Fitzgerald (Peter Sarsgaard). Once Roy lands the plane by himself, June tries to go on living her life, but she is about to be taken on the adventure of her lifetime by this fugitive that she has just met.

For a mindless action film, “Knight And Day” isn’t too bad, but from a critical point of view, it is a miserable failure. The majority of the special effects and even the scene backdrops look terribly fake to the point that they can just look ridiculous. The film seems completely amateurish compared to some of the other action films that have come out in recent days. As said before, the story, musical score and the special effects resemble that of a 1980’s/1990’s action film. Harsh, but true. There is nothing worst then watching an action movie and the only thing you can think of is how fake the crashes look and how you can tell that they really aren’t underneath the Brooklyn Bridge. A film is supposed to suck you in and make you believe that what you are seeing on the big screen is the real thing. However, “Knight And Day” is an extremely unrealistic film. The plot is very unrealistic, not that this matters in an action film like this the majority of the time. However, the unrealistic nature of the script is also transformed to being that of pure fun on the screen. Many viewers will enjoy the continuously changing location of the film and seeing the beautiful cities featured, while others will just scoff at the silly antics and how far from the truth everything is. On the other hand, it really is quite comical in parts and there are quite a few giggles to be had throughout the film.

However, Cruise is worth going to see this movie for. He is still likable and is definitely the hero of the story, in both the story and in the mind of the movie viewer. As he is the reason for people going to see this film, he will be the reason many people will also enjoy it. The role he plays isn’t very emotionally challenging, but he still plays the part well. Cameron Diaz is just fine. There is nothing amazing about her performance and, again, it isn’t a very hard role. However, she can be very funny at times. Peter Sarsgaard and Viola Davis are both good in their roles. They bring to the table everything they can in the roles they have been given.

“Knight And Day” will be a delight for Tom Cruise fans as they will enjoy seeing him in his return to action. However, it will be one of the more forgettable films of the year and is really just a load of silliness.
4.5/10