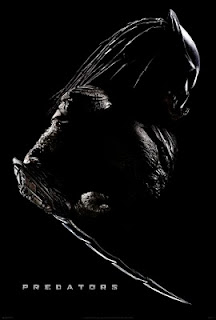 In My Own Words
From what I’ve heard, “Predator” was a classic, “Predator 2” wasn’t bad and “Alien vs Predator” was good entertainment value. From what I have seen, “Alien vs Predator- Requiem” was awful and “Predators”.....well, let’s just say from that my personal viewing of anything to do with “Predator” has been less than satisfactory. I’m almost embarrassed to say that I haven’t seen the first “Predator”, but my experience with the phenomenon hasn’t made me excited about the prospect of doing so. It just seems like a series of movies that has been going on too long. However I guess it is making money still as it is 3rd at the US box office as we speak so why not? Keep the money rolling! I know what all the “Predator” movies have been missing.....Arnie.

One thing this movie did do for me is it made me look forward to some of the movies that are coming out in Australia in the next few weeks. Who else is excited about “Knight & Day”, “Inception” and “Salt”? I am particularly excited about “Inception” and it is one movie I will be truly distraught about if it doesn’t live up to my expectations. It seems that even though Blockbuster season is drawing to a close, there are still some highly anticipated films heading our way. And let’s not forget “Despicable Me” which is at the top of the US box office at the moment!

Review
Action galore and not much more. It seems like a perfect tagline for this movie as it tells you everything you need to know. Actually, there is a lot of another thing, the “f” word. Though I guess that word would be pretty appropriate if you had the Predator following you around. The film begins with Royce (Adrien Brody) free falling unconscious and waking up in panic before releasing a parachute. He lands in the middle of an unknown jungle and he is not the only one in the same situation. He is one of eight who have no idea where they are or how they got there. It is not long before they figure out that they are not the only ones in the jungle, yet they are the only humans.

If you are after a mindless action movie, then this is it. There is a complete lack of depth in the story. There are holes all over the place and quite a few unanswered questions. Jokes that are supposed to be funny and just aren’t. There is also a lack of suspense and feeling of dread that should be present in this film. It is not entirely predictable, but there is no thirst to find out what happens next. Director Nimrod Antal must have decided that he would use the musical score to make up for the lack of script, as there seems to be background movie for well over half the movie trying to build up the suspense. So much so that it seems like it is a complete overuse of music. In the films defence, it is supposed to be an action film based purely on the terrifying creatures. It isn’t supposed to be a very in depth film as that is never what the previous “Predator” movies were about. The special effects are very impressive and fans of the old “Predator” movies will be happy to know that that part of the movie has not changed, and are obviously more superior than they were back in 1987.

“Predators” is a strange choice of film for actor Adrien Brody. It is unlike any other movie he has ever done. It is far from his best work, but he is far from the worst thing about this film. He gives a strong performance and is extremely intense throughout the film. He is not your typical action hero, but pulls it off nevertheless, once again showing his versatility and capabilities. Laurence Fishbourne pulls off a strange and unsettling performance, as does Topher Grace.

Again, there is not much to this film. “Predator” fans will be disappointed that the first time in 20 years that they are seeing these creatures of fear without aliens is not the true thrill that they would expect it to be. To watch this movie, you need to be leave all need for a well written script and storyline behind and be in it for the special effects. Those creatures aren’t even close to being as terrifying as what they should be.
3.5/10