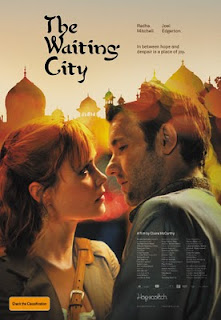 In My Own Words
Another Aussie film for the year! I am so proud of the large variety of films that my country is producing at the moment. One can only hope that the world beyond Australia will get to see these films as well. “The Waiting City” is a first for Australian film as it is the first Australian movie filmed in its entirety in India. This was one of the two things I personally loved most about this movie. I have a fascination with India at the moment. I mean, what isn’t fascinating about it? There is not much about it which resembles Australia or any other country I have ever visited, which is what intrigues me the most about it. All the Indian cities seem extremely like extremely spiritual places and just by seeing them on the screen, you can just imagine the how it must feel to be there. Well, that s probably a result of the filming of the films set in India that I have seen! Of course the poverty is extremely confronting just on the screen, I can’t imagine how it would feel seeing all that suffering in front of your eyes. I guess I will find out one day! However, I still can’t wait to go! Not to see the poverty, but to see things like the Taj Mahal and experience the culture! It didn’t surprise me at all to learn that Claire McCarthy has India close to her heart, as she has lived and worked there in the past.

The other thing I like about this film is the underlying message. You never quite figure out who you are or the place you are in until you step outside your everyday life. You never really know how things really are until you step back and take a look at yourself from outside the bubble. I found this about myself over three years ago when I went over to the United States for the first time by myself. I found out who I really was and realised where my life was heading, it’s a very healthy thing to do! I did the same thing when I lived in Los Angeles for six months in 2008. I don’t think it was a better way to find out who I really am. I think that I have to thank my six months away from my usual habitat for what I am doing on here! And also for the great relationships in my life, as you never realise how hard it is to find the wonderful people you have in your life until you don’t have them around. You have got to love travelling! It does so much for the soul.

Review
Claire McCarthy’s newest film, “The Waiting City” is breakthrough in many ways. Not only is it the first Australian film to be completely filmed in India, but it is her breakthrough film as a director. This is McCarthy’s fourth film, but is definitely her most successful to date. Not to mention it made its debut at the inaugural Toronto International Film Festival last September. The film has many good points, but even though it can be extremely confronting and emotional at times, it still lacks the intensity that it should in parts. Fiona (Radha Mitchell) and Ben Simmons (Joel Edgerton) touch down in Calcutta and are immediately culture shocked by the country in which they have arrived in to pick up their adopted daughter. One setback turns into another as they are forced to wait longer than they expected to meet their new child and bring her home. As they wait, they feel the power of their new daughters homeland as it pulls them in and exposes Fiona and Ben’s flaws in themselves and in their relationship.

“The Waiting City” is one of those rare films which has the ability to make you feel like you really are there experiencing it all with the characters. Even without being to India, you can smell the same things they do, feel the humidity and see things the same way Fiona and Ben do. The star of this film is really India. It is on show in “The Waiting City” and one can truly believe how the main characters can get so caught up in its mystery and how they start to feel like they are as one with the country. This film is visually stunning and the visuals make it extremely memorable. The clash of cultures is perfectly represented and it is intriguing as well as being humorous at times. The cinematography is very well done as it again captures the essence of Calcutta and its surrounds by the choice of camera angles and modes of filming.

The acting is good, but unfortunately it is the one part of the film that is a let down. Both Radha Mitchell and Joel Edgerton are very good actors in their own right, and do have chemistry on screen, but it almost feels as though the roles were a bit too easy for them to play. The roles they play are subtle, but they are too subtle in the most complex situations. The emotion of the situations they find themselves in, except for one main event, does not grab the audience in the way it should. Edgerton is the better of the two in this film as he is the one who gives more in his role.This doesn’t mean that Mitchell did a bad job, but it wasn’t as strong a performance as one would expect from such a role as this. Samrat Chakrabarti, who plays the Simmons’ personal chauffer, Krishna, does do a great job with the role he is given and is a joy to watch on screen. Maybe McCarthy focused more on the visuals in the film and how India is represented, rather than how far the actors could have been pushed to reach the heights their roles should have.

“The Waiting City” is really an aesthetically pleasing film. If anything, it will make you want to pack your bags and go to this beautiful place to enjoy the simpler things in life and to find yourself, if you feel that you need to be found. The key to this film being a success would have been to focus more on the raw emotion of the difficult and complicated situations presented. Therefore, this film will be remembered more as a great tourism product for India rather than the all round great film it could have been.
7/10