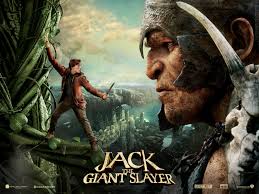 Before I begin my review…

I know this has got hardly anything to do with the movie, but how good is the name Jack?

Jack will never go out of style. The name suits a little boy, a young man and an older man. It is such a distinguished and strong name. A Jack is not to be taken lightly. A Jack will do many great things. The fairy tale which Jack The Giant Slayer is based on, Jack And The Beanstalk does not have a Jack has the protagonist for no reason.  With a strong name comes a strong will.

I may be of a slightly bias opinion considering I did name my son Jack.

It is unfortunate that one of the most famous Jack’s in history is Jack The Ripper, but I think we can all get past the fact that it is highly unlikely the notorious serial killer’s name was actually Jack. I think it is safe to assume that whoever it was was a strong person, as well as being insane (we hope).

I can assure you he is not the Jack I named my Jack after.

As he gets older, I am sure my Jack will love the fact that there is a film called Jack The Giant Slayer. I’m sure I will be watching this on DVD in years to come with my budding little film critic.

Why not make a film based on the fairy tale Jack and The Beanstalk? It seems like everything has to be made into a movie, so why not?

It’s not necessarily a bad thing either, especially in the case of Jack The Giant Slayer. This is one fairy tale that could only be made in a time like now with the amazing cinematic techniques we have in recent times. Could you imagine how ridiculous the giants and the beanstalk reaching to the sky would have looked if made any time before the 1990’s? Animation probably would not have made the film too bad, but real life action would have meant complete B grade, and also maybe cult favourite status.

Jack the Giant Slayer is everything you would expect a fairy tale film to be. It is corny in the way that most fairy tales are, but is still entertaining enough and has some incredible special effects and cinematography.
Our hero, Jack (Nicholas Hoult)is a young farmhand who experiences a twist of fate when he visits the town market in order to sell his horse. He sells his horse to a desperate monk in need of transportation out of the city in exchange for a handful of beans. It is only when a terrible rainstorm occurs, that he realises that these beans are what grows beanstalks that reach high up to the land between Heaven and Earth where giants roam. Jack becomes a key part in the rescue of the Princess Isabelle (Eleanor Tomlinson), who has been taken prisoner by the giants and he also must stop Roderick (Stanley Tucci) from achieving his goal which could threaten the kingdom.

The bad things about fairy tales and other well known stories being made into films is that unless the film makers have put their own spin on it, the film is predictable and very rarely has any suspense. This is no surprise and just something we must accept. Sometimes this can be a bore, but Jack The Giant Slayer isn’t that. 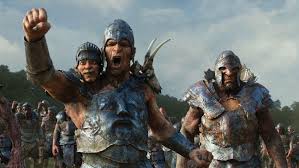 As one would expect from director Bryan Singer, the film is very well directed and very entertaining. It is just a fun film and at times, it is more like watching a historical film rather than a fairy tale. The film travels along at a steady pace, but the end seems quite sudden and then almost a little confusing. This in itself is confusing as a story which is quite simple to understand shouldn’t have an ending which confuses people.

Fairy tales are in general entertaining to watch on the big screen, but visually Jack The Giant Slayer is better than most. A great thing about this version of the fairy tale, is that the giants are made to truly look terrifying. They are not just big men, but are all deformed and evil. The beanstalk is also an amazing creation. The CGI of even the tiniest detail of the stalk is incredible. The landscape of each of the two kingdoms are just magnificent.

The time period is very well recreated and quite a pleasure to see. The battle scenes are very well orchestrated and have a slightly Lord of the Rings touch to them.

Nicholas Holt does well as Jack. With his career currently on the up, Hoult shows here that he has no problem being able to carry a film. Ewan McGregor gives a steady performance and his character is extremely likable. Eleanor Tomlinson’s performance is not a huge stand out, but she does do well.

Jack The Giant Slayer is entertaining and well made. It is a visual delight that shows you just how far films have come in regards to special effects and cinematography,
7/10

You may have also seen Nicholas Hoult in....
X-Men: First Class as Hank McCoy/ Beast

You may have also seen Ewan McGregor in....
The Men Who Stare At Goats as Bob Wilton
The Impossible as Henry

You may have seen Stanley Tucci in.....
The Lovely Bones as George Harvey
Easy A as Gill
Captain America: The First Avenger as Dr Abraham Erskine
Posted by NP1982 at 4:58 AM