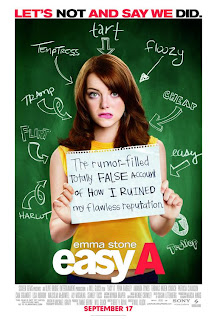 Obviously this was my experience while watching “Easy A”. I don’t understand why people do these things in the movies. If you were going to talk to your friends the whole way through or look at your phone, then why purchase a $10 movie ticket when you could just do that at home for free? Maybe I get too fired up about it...but one more thing I don’t get. I saw the new Harry Potter trailer today (something I am VERY excited about and went home to watch “Harry Potter and The Prisoner Of Azkaban to celebrate seeing the trailer!) and the group of teenage boys and girls killed themselves laughing whenever any emotion was shown in the trailer and when the sentence “The Motion Picture Event Of A Generation”. This also happened when I saw “Harry Potter And The Prisoner Of Azkaban” at the cinemas when it first came out. A group of teenagers killed themselves laughing when Harry cried. Is it really that cool to laugh at Harry Potter? Is it taboo for some teenagers to like Harry Potter and will they really be social outcasts if they do? I actually know plenty of teenagers who like Harry Potter and plenty of adults as well. I am probably over-analysing.

I suppose this is just what you are going to experience when you go to see a “teen flick” like “Easy A”. I am getting cynical in my old age. Or has anyone else noticed this?

Review
“Easy A” is just a load of fun. One would think that with a subject matter such as this, a film would be crude and dirty. However, there is an evident lack of obscenity in this film that makes it a film that a wider audience can enjoy, rather than just the hormonal teenage crowd. The quick witted humour, well written script and the leading lady make this film a breath of fresh air and a pleasure to watch. Olive (Emma Stone) was to invisible to ever have any type of reputation until the day that she makes up a tale to get her out of spending the weekend with her best friend, Rhiannon’s (Alyson Michalka) crazy parents. Before she knows it, the school’s rumour mill is in over drive and Olive is the subject. Rather than publicly deny the rumours, Olive decide to use her promiscuous reputation for good by making people believe that she has slept with the school’s bullied to ironically better their reputation. Before she knows it, she is in too deep and she has no idea how to climb back out.

It is the simple but smart humour which makes “Easy A” a winner. It is a stereotypic al teen movie which, like a good genre film should do, breaks past the target audience and is a film that many people will enjoy. One would expect the topic of a girl pretending she is having sex with all these guys to lead to jokes of a sexual nature, but the jokes and humour is very tame. The one-liners are especially funny and credit must definitely be given to the script writers. “Easy A” is not a tear jerker or in any means is very deep, but it is a great film to watch without having to think too much. There is nothing really spectacular about the directing or the cinematography. It’s a film that relies more on the script and the wording than anything else. It is a very simple comedy.

The other big thing that makes “Easy A” work is Emma Stone. She is absolutely perfect as Olive and is just hilarious. She is witty, sarcastic, clever and insane all at the same time. Minus the fact that she is lying and pretending to be a floozy, she is the way you would have liked to have been in high school. Well, maybe not the way you would have liked to have been, but definitely someone you would’ve liked to have known as there would be a laugh a minute and never a dull moment. It is a credit to both her acting and Will Gluck’s direction that she is such a great character. Stone stands above all the over young actors as they all give rather mediocre performances in which nothing is really special about their roles in this film. Stanley Tucci and Patricia Clarkson are both hilarious as Olive’s parents. They don’t have much chemistry between them on screen, but the laughs they create make up for it.

“Easy A” is far off being a contender for an Oscar. It is not overly fantastic, but the humour just allows for good movie viewing. The quick banter and witty one liners make this a movie which people who aren’t in their teenage years can enjoy. It may also give teenage girls the idea that if they think they are an outcast because they are a virgin, it is far worse being an outcast because you are the complete opposite. And there is nothing wrong with knowing that.
7.5/10