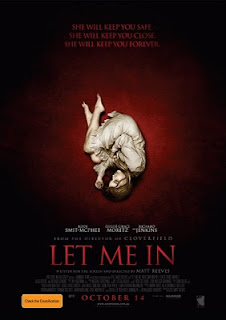 In My Own Words
I often wondered (until about 2 days ago) why American studios decideto adapt foreign films not too long after they are released in their home countries. It used to make me slightly angry why they did, it was like I thought they couldn't come up with ideas of their own so they had to "steal" ideas from other countries. Now I realise that I was being really unfair by thinking this. Now I see that foreign films are remade as a means of exposing the story to a greater audience. Many people do not take pleasure in watching foreign films as they are too far removed from what they know, and they also involve a fair bit of reading of subtitles unless you know the language. So making the film into an English speaking film exposes the story to a greater audience. And if it is a great story, why shouldn't it be exposed to an audience? It would be selfish to let language barriers get in the way of great storytelling! Especially when it is a story like "Let The Right One In", the Swedish film which "Let Me In" is based on. I must admit, I was extremely weary going into this film, as I normally am when seeing a remade film, or watching a vampire film. However, it has cometo my attention as of late that a remade film doesn't mean a bad film, especially those that are remade from a foreign film. Just look at "The Departed"!

Review
The thought of another vampire movie may bring on a cringe for some people. With so many vampires going around in movies and on television, one can be forgiven for thinking that "Let Me In" is just another one of those films that has come along with the fad. It isn't. It is far darker and more disturbing than any other vampire phenomenon you have seen in a long. long time. Like it's mother movie, "Let The Right One In", it evokes a number of emotions which are strange to see together in a film. There is tenderness and innocence, as well as fear and horror. Young Owen (Kodi Smit-McPhee) is an outsider at school, badly bullied and is in the middle of his parents divorce. He is without a friend in the world, until he meet a mysterious little girl by the name of Abby ( Chloe Moretz) in his courtyard of his apartment block. He develops a strong friendship and falls for her in the way only a 12 year old can. He finds out in the worst way possible that Abby is a vampire and that everything is far more complicated than it should be for 12 year old best friends.

"Let Me In" is dark, but somewhat beautiful. It stays true to the film which it is remade from, but it is set in New Mexico rather than in Sweden. There is nothing corny about this vampire film, and it represents what vampires should represent, fear in the heart of those who meet them. It is extremely unsettling at times and very intense and suspenseful. However, there is a feeling of sympathy for both Owen and Abby. The film focuses of human emotion and the troubles of a child growing up being bullied and in a troubled family. There is a real sadness to the film, as well as real terror. It wouldn't be a vampire film or a main stream remake without having more blood than it did in the original and therefore leading to some cringe-worthy moments. The "scary" scenes are definately not subtle. "Let Me In" is very dark and not for the faint hearted, it is everything a traditional vampire movie should be.

Kodi Smit-McPhee and Chloe Moretz are perfectly cast for the lead roles. Smit-McPhee is wonderful in this film. He shows so much emotion and his performance will ring true to many parents who are watching their children going through the same things he is going through. He really has a bright future ahead of him. Moretz is no stranger to horror movies or to playing roles of the young girl who is beyond her years. She is not the traditional vampire girl, but that only makes her more suited to the role. She is very good in her role as she is cute and sweet, but also an absolute horror.

"Let Me In" takes the vampire movie back to where it belongs. When vampires were beings that were capable of violent killings and would kill without rhyme of reason and there is no corniness to be seen. There is always something troubling about children in horror films, and this movie is no different. Yet, there is still something very sweet about the friendship between Owen and Abby and that is what makes "Let Me In" work. The combination of childhood love and the presence of pure terror.
8/10