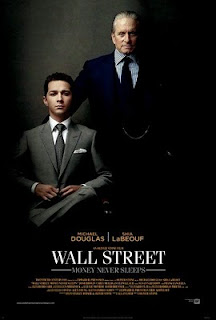 In My Own Words
Well, it’s been a long time in between drinks for Gordon Gekko. I watched “Wall Street” for Business Studies while I was in school (stop trying to guess how old I am, it was way after the film actually came out so you can’t win this one). I’m thinking that the real reason the teachers got us to watch it was to take a break from teaching for the day, but I’m assuming that their reason for us to watch it was to learn about business ethics. That if we are unethical we will end up in jail like Gordon Gekko. It must’ve worked because as far as I know, none of the girls I went to school with are in jail. It was hardly the most exciting film for 15 year old girls to watch. “Wall Street” is definitely an adult film. Not because it has adult content in it, but school children aren’t able to relate to it in any way, shape or form. It’s long awaited sequel isn’t a younger person’s film either, however the admission of Shia LaBeouf may bring a younger audience into the cinemas. If so, they may not have the same movie experience as they did when going to see their heart throb in “Transformers, but at least they won’t end up in jail for fraud.

Review
“Wall Street: Money Never Sleeps” is the long awaited sequel to “Wall Street”, which means that, like it or not, it does have a level of expectation attached to it. Those who were waiting for a huge Gordon Gekko extravaganza, then it’s not that. However, if you haven’t seen “Wall Street” or think that less Gekko is better, you may not be disappointed. The much updated version of the 1980’s corporate drama is one of those films which you will sit on the fence about. Neither a failure, but far from a classic. Jake Moore (Shia LaBeouf), a young, up and comer on Wall Street who is going out with the infamous Gordon Gekko’s (Michael Douglas) estranged daughter, Winnie (Carey Mulligan). It has never been an issue, but when Jake’s mentor and father figure, Lewis Zabel (Frank Langella) commits suicide and he then proposes to Winnie, he becomes completely intrigued by his future father in law. Although he tries to tell himself that he has got in contact with Gekko for Winnie’s , it is clear that there are more selfish motives involved on Jake’s behalf.

What fans of the original “Wall Street” will find is that this film isn’t as centred around Gordon Gekko as many would have hoped. However, for people who are not fans of the original or those who haven’t seen the first, you don’t need to have seen it to understand it or enjoy it The film is more about Jake and Winnie rather than Gekko and his daughter or Gekko and his future son in law. By the focus not being purely on Gekko himself, the film can be judged as a stand alone film rather than have the stigma of a sequel be in the way.

There are some truly good things about “Wall Street: Money Never Sleeps”. For one, the directing is quite superb, as one would expect from Oliver Stone. He makes some interesting choices in camera shots, but they work. There are some scenes were the choices he makes on the way things are shot are quite beautiful and spectacular. The only thing that can be criticised about the cinematography is that at times, it seems like Stone tries to do too much and is trying too hard to impress with what he can do and what can be done. The script is well written and has just the right jargon for the subject matter. The only criticism is that it is really quite predictable. There are no surprises hidden in the film at all, which can make it quite tedious. It is also very slow at times and is very slow getting to the point.

Michael Douglas is back to his best as Gordon Gekko. His performance this time around isn’t quite as effective as it was in the first film (sequel stigma rears its ugly head). It’s his actions in the script which make him the scheming Gekko, rather than his acting. Shia LaBeouf unfortunately seems miscast in this film. He is made out to be a young Wall Street yuppie, but it is hard to tell from his performance that he is as ambitious and money hungry as the film tries to make him out to be. He can actually seem a bit pathetic at times. His acting isn’t all bad, but his performance should have been done with more arrogance or the role should have been given to another young Hollywood male. Carey Mulligan once again gives a heartfelt performance and takes her role as far as it can go. Her only fault as far as her character is more a criticism of Stone’s direction than her acting is that she spends so much time crying and being depressed that her character of Winnie can be extremely morbid and almost painful. Mulligan still manages to give an extremely realistic performance and lacks nothing in her acting. Frank Langella also must be commended for his performance. Langella is never one to not give 100% in his roles and this is another one of his successes.

“Wall Street: Money Never Sleeps” will have its fans and its cynics. It’s ironic that there is more chance of non-fans of the original “Wall Street” enjoying this than fans of the original enjoying it. Don’t be afraid to go and see this film if you don’t enjoy the first or even if you haven’t seen it, because you may be pleasantly surprised. If you are a fan of the original, still do see it, but don’t expect it to be a direct follow on from the original, which would be impossible anyway as the original was released 23 years ago. Clear you mind and go to see the film purely as a stand alone.
6/10

I want to know more about......
Michael Douglas
http://www.moviecritical.com/2010/10/michael-douglas.html