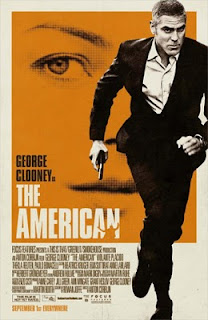 In My Own Words
I can truly believe that "The American" would not be everybody's type of film. It is a very interesting film, if not very confusing. It doesn't tell you much. There is so many questions which remain afterwards. It is funny, a movie can be criticised for leaving too many stones unturned, but then you get a film where barely anything is revealed and it can be considered a masterpiece. I'm not saying that "The American" is a masterpiece, but there are so many films which don't tell the story and are considered amazing. I suppose it all comes down to whether it makes you uneasy not knowing exactly what is going on or not. I don't know exactly what I am to tell you the truth. Some films I don't mind not having a back story and some I do. I'm actually thinking that I prefer to know the whole story. I love getting to know all different types of people so naturally I like knowing the characters like they are people I have just met in reality! Yet, mystery in people can be completely intriguing, as is the case with movies.

I have been asked after watching this film "What is the movie about?" I can answer it in one sentanceand very vaguely, but that is about as far as I can get. For this reason, I am completely intrigued, as should be everyone else who see's this film.

Review
Many people may be surprised by the type of movie which "The American" is. With the star being George Clooney and being shown in the main stream cinema multiplexes across Australia, one would expect the film to be quite commercial. However, it is anything but. "The American" is a piece of art in the traditional sense. It is stunning to watch, but carries a sense of mystery and questions which are begging to be answered. It is the marriage of the Italian film and the American film, something that hasn't been seen in quite awhile. Jack (George Clooney) is the American who is in hiding in a small Italian village after a project in Sweden ends disastreously. When hiding out in this small town, Jack decides that he wants to leave this part of his life behind and start anew after one last project. Jack starts to slip into his new life by befriending the local priest and forming a relationship with Clara (Violante Placido), before he leaves his old life behind.

So many questions are left unanswered in this film, which can make it unsettling to watch and many people will find just too strange to feel right to enjoy. It is, however, quite the piece of art. Director Anton Corbijn constructs every scene with the utmost care and no scene is not left aesthetically perfect. Every scene is compelling and beautiful and you can often get lost in the visual beauty enough to forget what is actually happenning story-wise. The cinematography and editing is superb. The beauty of Italy is perfectly caputred, while the camera also captures every tiny bit of emotion displayed on each of the main players faces. As previously said, the story itself can be a tad uneasy for some as it does not present itself simply. It is a simple storyline which is made complex by a verbally restricted script and is told more by the visuals and camera angles. For some this may be challenging and unsettling and others it may be challenging and fascinating.

The acting in "The American" is extremely subtle, yet effective. Although it may seem like George Clooney is hardly acting, it is actually one of the hardest roles he will ever have to undertake. He doesn't have any long speeches to express how his character feels so he has to express everything in his facial expressions. It is a hard job to try to keep a neutral expression while still trying to tell something with your face. Clooney achieves this in his role and shows his brilliance in his profession by being able to do this.

If you like everything presented to you simply in a movie and you don't like to be too mentally stimulated, then "The American" isn't for you. It is not often that a film comes along which can be as mentally stimulating as thes, yet doesn't have much to say out loud.
8/10