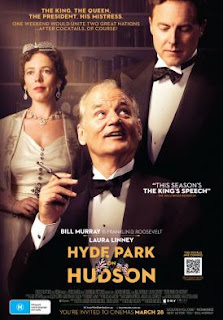 Before I begin my review…..
“THIS SEASON’S THE KING’S SPEECH” Hyde Park on Hudson’s promotional poster declares.

Honestly, this is probably the worst quote they could have chosen to put on their poster. Of course it is a compliment of the greatest kind because The King’s Speech is one of the best films of recent times so there is no better way to promote your film. Yet what it means is that once you get your people into the film, they are just going to be comparing it to The King’s Speech. And that’s a problem when your film clearly isn’t this season’s The King’s Speech.

The obvious similarity between the two is that King George VI and Queen Elizabeth are in both of the films so some of the topics addressed are in both films. This is the third film in as many years to feature these two historical figures. The second film being Madonna’s W.E., which was again by some camps likened to The King’s Speech as it was about King Edward VIII’s abdication to be with Wallis Simpson and King George VI and Queen Elizabeth were featured in it.

Neither of the latter films contains the power which The King’s Speech had. Not many do considering the film won Best Picture at the Oscars. None of the performances are bad by any of the actors who played Bertie (King George’s nickname to his family) and Elizabeth, but Colin Forth set the bar for future performances of the character.

What a performance to try and live up to. It is quite like thinking about Daniel Day-Lewis’s performance as Lincoln in the film of the same name and imagining someone trying to give the same sort of performance. It’s a hard task as it’s a historical figure they are playing so they can’t put their own spin on what the character is like as there is factual information about how they are. All three actors are striving to be the same person.

So I do feel sorry in a way for Samuel West. He does give a good performance, but it is hard to look at him and believe he is Bertie as you know that is who Colin Firth perfected. It’s a tough gig.

Review
Hyde Park on Hudson is a good little historical recreation of a weekend which meant so much to both England and the Unites States.

It serves its purpose of informing as well as entertaining, but it is only light entertainment. Hyde Park on Hudson is not a powerful film in any way, shape or form. It would seem there would have been some strange decisions made in the writing of the screenplay and in pre-production that have resulted in this film falling short of its potential.

Daisy (Laura Linney) is a fifth cousin of President Franklin D. Roosevelt (Bill Murray) and although she lives not far from his family home of Hyde Park on Hudson, her life is far from the privileged life of the Roosevelts. Her life is turned upside down when FDR’s mother (Elizabeth Wilson) calls upon Daisy to visit her cousin to relax him and two become close friends and then lovers. Daisy is in attendance at Hyde Park on Hudson when King George VI (Samuel West) and Queen Elizabeth (Olivia Colman) come to stay for the weekend, which is a historical occasion as a British king had never before visited the United States. It is also a very important visit for the British royals as Europe was on the verge of war and they wanted the United States as their allies. The visit provides a Saturday night in which nobody gets any sleep and nobody involved will ever forget.

This film is a treat for anybody who loves their modern history films. It contains four of the most prolific historical figures of the twentieth century as seen from a personal point of view rather than a political point of view. The film makers wanted to show who these characters were as people and show that they are still just like us when they are out of the spotlight.

Director Roger Michell definitely does this, but it is actually quite discouraging in part as by the end of the film, all the characters flaws have been bought to the forefront of the film so much that it is what you most take away from the film. With historical figures such as these who people have and still do love and admire, it’s not really a bad perception of them that you want to walk away with. For example, Queen Elizabeth just comes away looking like a bully to her husband and that notion isn’t really made up for at the end of the film. History tells us that she was a strong willed woman, but also extremely supportive of her husband. It is understood that Michell wanted his characters to be seen as real people with flaws just like the rest of us, but surely he didn’t want to actually put them in a bad light to be remembered.

The films really is very light, there is not a great deal of emotion to be felt about anything in it really. You don’t feel particularly drawn to any of the characters or feel any type of severity for their situations. The way screenwriter, Richard Nelson chose to write the relationship between Daisy and FDR and the way Michell chose to film it is so ridiculously lack lustre. Daisy talks about how much she cares for and misses FDR, but you can’t understand why. Besides being summoned whenever he is in town, their time together doesn’t really seem all that sentimental and there just seems like there is not chemistry between the two at all. 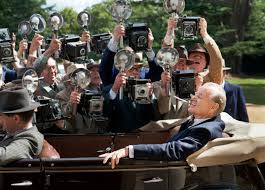 However, the acting is still very good. Bill Murray completely personifies FDR and Samuel West and Olivia Colman are both also very good. Laura Linney hasn’t been given much to work with and she does well from what she is given, but Daisy is not a very interesting character and Linney has certainly had better roles.

Visually, Hyde Park on Hudson is quite impressive with some beautiful location shots and wonderful cinematography. The musical score is also very good and very appropriate to the 1930’s.

This film had so much potential and would have benefitted from changes in the screenplay and production that would have allowed it to have more of an impact on an emotional level. It is an easy watch and a good little historical lesson, but not much more than that.