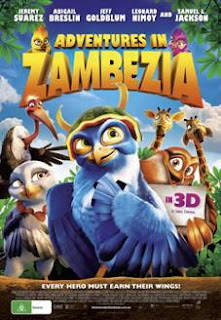 Before I begin my review…
My thoughts on Adventures in Zambezia as I watching it was that maybe, just possibly, I am being harder critically on this film because it isn’t Disney.

Disney may have just ruined my perception of every other animated film I will ever see. Actually, that isn’t true. Dreamworks have had a part in that as well lately. Disney though, I’ve been watching my whole life and the animation just keeps getting better and better. You think about animated movies chances are you will think of Disney…or a Dreamworks film such as Shrek or Kung Fu Panda.

I was watching Adventures in Zambezia and thinking “Well, it isn’t up to the same quality of the animated films I usually see”…and then I think “It’s not Disney! That’s not fair! Stop comparing it to Disney!”

Disney is amazing, it rules the child within me and my 10 month old son already recognises the tune that plays at the beginning of Disney films when the castle appears, but that and now Dreamworks have ruined the way I see animation. I have to try and tear myself away from those two production companies when I set expectations about animation. I feel bad being an animation snob.

Not saying that the movie Adventures in Zambezia and its animation is bad. If it was I doubt they would have made the movie if it looked like a load of scribble. Sorry for comparing you to Disney, Triggerfish Animation. 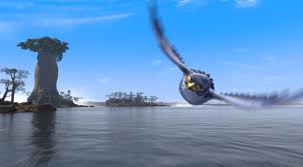 Adventures in Zambezia is quite a simple film, which makes it great for younger audiences.

With school holidays just around the corner in Australia, this is one film which families will be heading out to see. It won’t appeal to the older audiences as much as there isn’t much depth to it, but it is a very light and easy watch with some fun moments throughout.

Kai (voiced by Jeremy Suarez) is a young falcon who longs to see the world beyond the boundaries that he and his over-protective father, Tendai (Samuel L. Jackson in his first G rated film!) patrol. After an argument with his father, Kai takes flight to the bird paradise on the edge of Victora Falls, Zambezia. He arrives to find a place that is unlike anything he has ever dreamt about. When he meets Sekhuru (Leonard Nimoy) and his adopted daughter, Zoe (Abigail Breslin), Kai finds out that he has a connection to Zambezia that stems right back to his birth. Zambezia is also under the threat from Budzo (Jim Cummings) and his Marabou stork followers and Kai may just be the help Zambezia needs.

Adventures in Zambezia is very easy to follow with a simple plot and simple script. It is perhaps too simple for a wide audience to enjoy. It’s very predictable and there really is a lack of emotion. For an animation to stretch its audience, there typically needs to be a little depth there and maybe even a little tear shed along the way. However, Adventures in Zambezia is very much a surface film, there isn’t much below it. This is a great film for children, and at 83 minutes it is also the perfect length.

The animation has some great moments which are typically of the African landscape. Victoria Falls are recreated in spectacular fashion and the jungle is pretty impressive. There is also a great use of colour throughout the film.

Zambezia itself is actually quite fun whether you are a child or an adult. Zambezia, which is a bird paradise, is based on what an adult’s perception of paradise is. It is just like a 5 star resort on some tropical island. There is accommodation that is labelled as if it is a hotel room, an international touch down pad made out like an airport, tour guides and those gossipy hairdressers who want to make you beautiful for your stay. The paradise is actually very well constructed and creative.

The characters are fine enough, but again, they aren’t particularly in depth characters or ones that will stay with you for too long. The Marabou storks provide the majority of the comic relief and have some cracker conversations between them.

There is one question. Kai tells his father that he was in the zone, which his father replies “Which zone is that, the twilight zone?”  How does a bird who has probably never seen a human before know what the Twilight zone is? Did they show that TV show in Zambezia? Or is there another twilight zone which isn’t related to pop culture?